Calvert Hall knocks off No. 1 Curley in double-overtime

No. 7 Calvert Hall staged a second half rally, Friday afternoon at No. 1 Archbishop Curley, and pulled out a 3-2, double-overtime, MIAA A Conference victory over the Friars in the annual Rief Cup battle between the two schools. 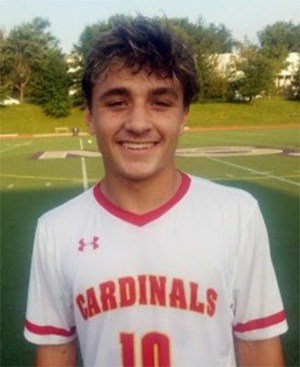 Sean Barwick scored twice, including the golden goal in double-overtime, to lift Calvert Hall to a 3-2 win over No. 1 Archbishop Curley and secure the Rief Cup for the Cardinals.

Looking to win the Cup for a third straight year and a 10th time overall, Curley took a 1-0 halftime lead on a goal by Anthony Schlee, but Calvert Hall got on the board in the fifth minute of the second half on a tally by senior star Ben Bender. Sean Barwick netted Calvert Hall’s second goal and then netted the golden goal in double overtime.

In tying the contest, Bender was fed a short pass, on a corner kick, off the right wing. He dribbled back to the center and ripped a shot inside the near post, from 15-yards out.

Bender played a hand in the second goal as well, as he controlled a ball in the midfield and found Barwick making a streaking run down the left side. Barwick cut the angle to the goal and slid the ball past Curley goalkeeper Chris Denholme to push the Cardinals on top, 2-1, with a little more than 16 minutes left in the second half.

Four minutes later, Schlee scored his second goal of the game, on brilliant corner service by Brandon Holy. Schlee nearly won it for the Friars with five minutes to play in the second overtime, as he just missed on a one-on-one opportunity in front of the Cardinal goal.

Three minutes later, Barwick was injured and momentarily left the game. Shortly after he returned, he won a ball in the middle of the field and was not picked up by a defender. He dribbled forward a few strides and then let loose a 30-yard blast that found its way past Denhome, setting off a celebration for the Cardinals.

“It feels good,” said Calvert Hall coach Rich Zinkand after the victory. “I think I will enjoy this one.”

Calvert Hall’s win cut Curley’s lead in the Rief Cup series to 9-8-1 in what is one of the best high school soccer rivalries in the nation. Curley (11-2-1 overall) still has a huge lead in the Black Division of the A Conference with 9-1 conference record. Calvert Hall (6-5-1) improved to 5-4-1 in the league and picked up a huge three points as it attempts to nail down third-place in the division and playoff spot. The Cardinals are four points back of second-place Loyola (6-2-2) and four points in front of fourth-place John Carroll (4-6).