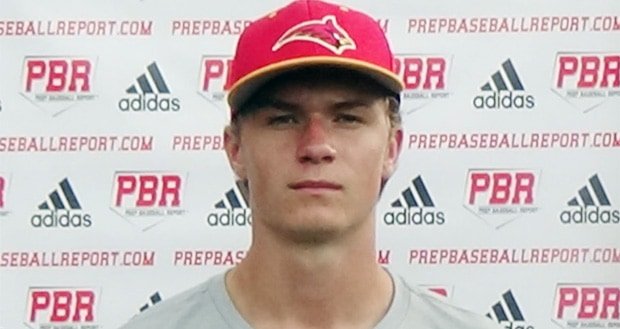 On day after scoring 10 runs in an inning against No. 20 Mount St. Joseph, Calvert Hall returned to its home field, Tuesday, and scored 13 in the bottom the first inning, on its way to a 17-7 five inning win over No. 11 Bel Air.
The visiting Bobcats actually got started on a high note, scoring six times in the top of the first, but before the second inning rolled around, they trailed by seven. In the victory, the Cardinals stroked four doubles and a triple. Garrett McIhenney, Jose Torres, Parker Landwehr and Peter Marchineck all had two hits, while McIlhenney, Torres, Antonio Barranca, Marchineck and Alex Khan had two RBI’s each.
Calvert Hall improved to 5-3 on the year, while Bel Air was playing its opener.
Pictured above: Peter Marchineck continued the hot start to his 2019 season with a double and two RBI’s in Calvert Hall’s 17-7 win over No. 11 Bel Air.