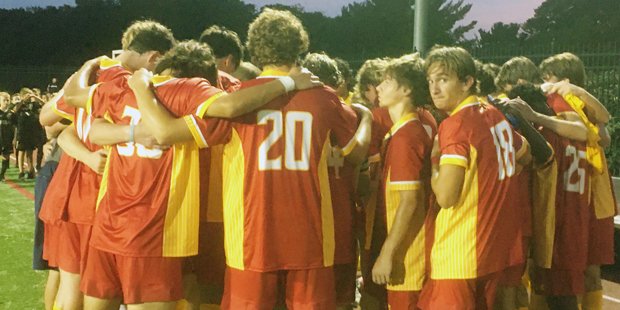 Even though only one goal was scored, there was plenty of action during Calvert Hall’s 1-0 victory over McDonogh on Friday night at Paul Angelo Russo Stadium in Towson.

That was especially true in the second half when the Eagles’ bid for the equalizer produced several promising opportunities that were thwarted by the Cardinals’ backline and junior goalie Nate Jones (8 saves).

Calvert Hall goalkeeper Nate Ross finished with eight saves and repeatedly came up big in the second half, as McDonogh applied pressure, to record his second consecutive shutout.

Senior Will Andrus and juniors Josh Nagy, Gabe Glikin and Ben Ramsey were most responsible for protecting Jones, although he had to make a couple of acrobatic stops during a salvo of shots to keep McDonogh from drawing even.

First, he denied a point-blank offering by senior Aidan Ellis in the 57th minute before turning away a header by junior Bryant Mayer two minutes later.

Junior Liam Beatson was Jones’ next victim midway through the final period, followed by a brief lull until the Eagles really ramped up the pressure in the final eight minutes of regulation.

In between senior Ethan Glaser’s two very good — but futile — attempts to beat Jones inside the near post, senior Usman Adegbenro authored a 25-yard rocket that the 6-foot-3 Cardinal keeper used a mighty leap to barely tip over the goal.

McDonogh’s talented forward Jacob Murrell, who notched three goals in a 4-1 victory over Archbishop Spalding to open the season, came to life after that salvo and pushed one header wide to the left and was an inviting target throughout the match on all of the Eagles’ six corner kicks.

Thanks to Jones and his buddies, though, Calvert Hall produced its second straight whitewash of stellar opponents.

The Cardinals topped Mount St. Joseph, 2-0, in their opener on goals by juniors Ryan Henneman and Ben Madore.

On Friday, senior forward/midfielder Rich Monath was credited with a goal when his cross was deflected into the goal by a sliding Eagle defender with just over 19 minutes remaining in the first half

Nagy tried to double the lead with just under two minutes left in the opening period on a header off a corner kick that McDonogh senior goalie Will Anderson snared.

Madore ran onto a ball inside the box in the early portion of the second half that found Anderson instead of the net.

McDonogh coach Brandon Quaranta said that his young team played better in the final 40 minutes than it did in the first 40.

“We didn’t play particularly well,” he said. “But there were a lot of positives in the second half. We had three or four good chances.”

Nagy said that good communication between the defenders helped to keep Murrell under wraps.

“We had to always know where he was,” Nagy, a Navy lacrosse commit, said. “When they tried to get the ball to him, we had to get our head on it first.”

Jones said that he and the Cardinals were definitely feeling the pressure applied by the Eagles.

Regardless, Calvert Hall has now faced two quality opponents and beaten them both.

Nagy said that the Cardinals cannot get ahead of themselves, considering that there are 18 more games until the playoffs.

“We can’t take any team lightly,” he said. “We have to play our kind of game.”

“Defensively, I thought we really played well,” he said. “Murrell is one of the top guys in the league and tough to stop all the time. But we got some breaks and Nate came up big.”
.
CALVERT HALL 1, MCDONOGH 0