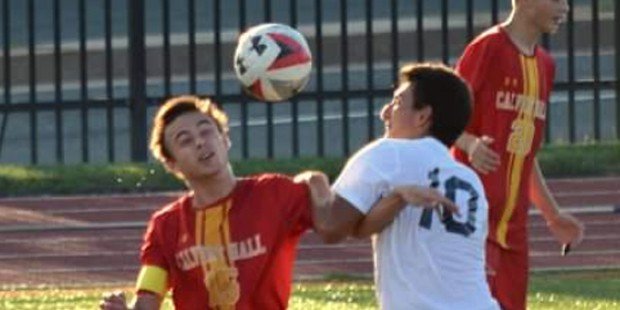 No. 19 Cardinals outlast the sixth-ranked Mavericks in uptempo affair played in scorching temperatures

With the heat index on the turf at Calvert Hall’s Kelly Field soaring close to 100 degrees, No. 19 Calvert Hall and No. 6 Eastern Tech did not wilt in the conditions, playing a high energy, uptempo, high-scoring boys’ soccer match won by the host Cardinals, 5-4, Tuesday evening. The victory snapped Eastern Tech’s area best 20 game win streak.

The Mavericks, who had not lost since their opening game of last season, closed 2017 with 18 straight wins and beat a pair of ranked opponents, over the weekend, at the Bel Air Tournament to open 2018. Calvert Hall, a perennial private school power looking to rebound from a sub-.500 2017 season, after winning the 2016 MIAA A Conference crown, appears to be back in top form and was playing its season opener. It all made for a marquee early season match-up that did not disappoint.

Tech was led by the relentless play of junior midfielder Dillon Nesturuk who scored all four goals for the Mavericks, but Calvert Hall used balanced scoring and a dynamic midfield to prevail to pull out the victory.

Everything came down to extra time at the end of the second half as Calvert Hall senior midfielder Dylan Burress tickled the twine off a feed from junior middie James Garfink, with just 25 seconds left, to elevate the Cardinals to victory, setting off an emotional celebration for the Cardinals and their faithful.

“What a game to start the season,” said Calvert Hall coach Ritchie Zinkand. “Opening match, we came out hard, we scored an early goal and the boys started to relax a little. Give Eastern Tech a ton of credit. They just kept coming at us. They’re physical. They played hard. They went up a goal. I like the way we responded.”

Calvert Hall junior midfielder Ben Bender set the tone early when he created a turnover deep in Calvert Hall territory, and four sharp passes later, netted the game’s first goal with 28:22 left in the first half. Bender led a strong effort by the Cardinal midfield to thwart many invasions by the Mavericks and start numerous counter-attack opportunities.

The Mustangs’ senior midfielder Isaac Ngobu put on a dazzling performance of speed and superior ball skills to advance the ball deep into Cardinal territory on numerous occasions. When Ngobu was able to center the ball, Nesteruck would be there to punch it home.

The combination led to pair of goals that pushed Eastern Tech in front, 2-1. Calvert Hall, which was led by two goals from Luke Ferrarese and two assists from Sean Barwick, battled back to take a 3-2 lead. The game was then tied at 3-3 and 4-4. Andrew Guidi also scored for the Cardinals.

“It was entertaining,” said Eastern Tech coach Peter Glaudemans. “Our team’s perseverance. Our team’s ability to face a challenging situation and not give up. We could have easily rolled over a couple of times and we didn’t. We showed great fortitude.”

Despite the setback, Glaudemans believes his team has the talent and makeup to to have another big year, after the Mavericks won the first boys’ soccer state crown in school history last fall.

“We have some kids who know how to play soccer, but most importantly we have kids who know how to think quickly and to take some chances when they need to take them,” added the 2017 VSN Co-Coach of the Year. “They are willing to work effectively as a team. Both teams did a very nice job inside the 18 finishing. You don’t get to 5-4 without people knowing how to finish.”

According to Zinkand, the tough battle and emotional finish was a major boost for his squad.

“Getting that game winner with just under a minute left, it was good to see the perseverance that we have,” said Zinkand, who was VSN’s Coach of the Year in 2016. “We’re fortunate to get the result that we did, but we worked hard for it.”