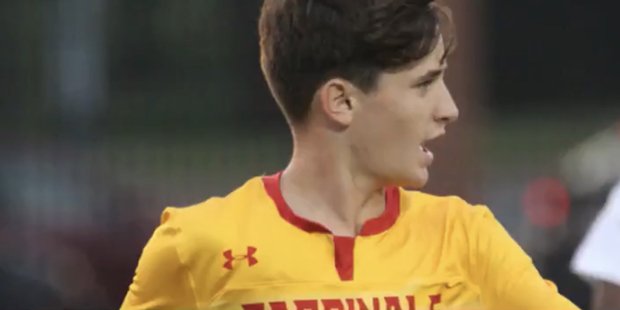 Although first place in the MIAA A Conference is still possible, No. 2 Calvert Hall clinched something nearly as valuable, Wednesday, with a 5-1 road win at St. Paul’s.

With the victory the Cardinals (17-2-1, 14-2-1) guaranteed themselves no worse than a second-place finish in the A Conference, which provides them with a first-round playoff bye and home game in the semifinals. One post-season win would advance Calvert Hall to the championship game.

The Cardinals now have 43 points in the standings with three games to play. Third-place John Carroll, which suffered a 3-0 loss to first place McDonogh on Wednesday, only has 32 points with just two games to play. McDonogh, which has 45 points has also clinched a first round bye, as it attempts to hold off the Cardinals over its final three games.

Pictured above: Cody Angelini scored twice to help the Cardinals clinch a bye in the first round of the MIAA A Conference playoffs.