Calvert Hall ascends to No. 1 in VSN Baseball Top 20 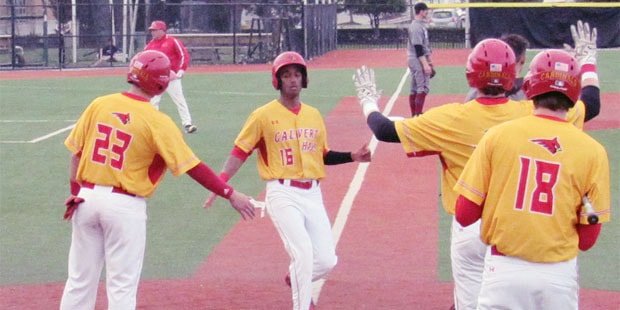 Dulaney climbs to No. 2; Old Mill jumps up to No. 10; C. Milton Wright debuts

After hovering at the top of the rankings in 2019 since day one, Calvert Hall has
taken the No. 1 ranking after winning the MIAA A Conference regular season title and clinching the top seed in the double elimination tournament and can win the championship today with a victory over No. 4 Gilman at Harford Community College.

It would be Calvert Hall coach Lou Eckerl’s first MIAA A Conference championship since their back-to-back titles in 2012-13 and their first No. 1 ranking since 2017. The Cardinals started last season at No. 3 and finished No. 15 after going 17-11.

Calvert Hall (23-6) began this season at No. 6 and has been No. 2 over the past few weeks and got an opening for the top berth this past week when then No. 3 Dulaney defeated then No. 1 Howard, 6-2, in the Class 4A North Section I final.

Gilman (22-10) remained No. 4 after advancing to today’s MIAA A Conference finals against Calvert Hall having to beat the latter Cardinals twice to take the crown. The Hall has taken two out of three games over the Greyhounds thus far splitting in the regular season and taking a 4-3 conference tournament victory last week.

Old Mill has reeled off 10 in a row and is one of the hottest teams in any of the four enrollment classifications entering a respective Final Four this week. The Patriots have not won a state baseball championship since 2003 and are going against a Walt Whitman (16-2) team that is totally new at this stage of the
state tournament having never won a region title (West) until this year.

Advancing to the 3A State semis on Tuesday, May 21) at Joe Cannon Stadium in Harmans of Anne Arundel County. The Harford County and UCBAC Mustangs will play a very good Northern-Calvert (15-5) team edged last year’s 3A finalist Huntingtown, 2-1 and Humbled Baltimore City power Poly, 24-zip.

CMW won its only state championship in 2010 and played in the state semis in 2017 while the Patriots from Calvert County have never won a state title and made it to the state finals in 1989 and 1990.

Two other teams debuting are Boys’ Latin (19-6) and Gerstell Academy (15-7), the two teams who will play in the MIAA B Conference finals today at Harford CC. The Lakers are three-time defending champions and advanced to the finals by routing Gerstell, 14-4, while the latter Falcons eliminated regular season champion Glenelg Country School (20-6) by scores of 10-7 and 15-2.

Boys’ Latin has swept Gerstell in three game this season, the other two in the regular season, but veteran coach Cap Poklemba’s Falcons can not be counted out.

This week: MIAA A Conference Finals vs. No. 4 Gilman, 6 p.m. at Harford Community College, 5-20 (Cardinals need one win, if necessary game would be 5-21, same time, same place.

Last week: lost to then No. 3 Dulaney, 6-2, Class North Section I final

This week: MIAA A Conference Tournament Finals, vs. No. 1 Calvert Hall, 6 p.m. at Harford Community College, 5-20 (Greyhounds need two wins over Calvert Hall to win the title, if necessary game would be 5-21 same time, same place)

This week: MIAA B Conference finals vs. Gerstell Academy at Harford Community College at 4 p.m., 5-20 (Lakers need one win for the championship, if necessary game would be 5-21, same time, same place)

This week: MIAA B Conference finals vs. Boys’ Latin at Harford Community College, at 4 p.m., 5-20 (Gerstell has to win twice for the championship, if necessary game would be 5-21, Same time, same place)