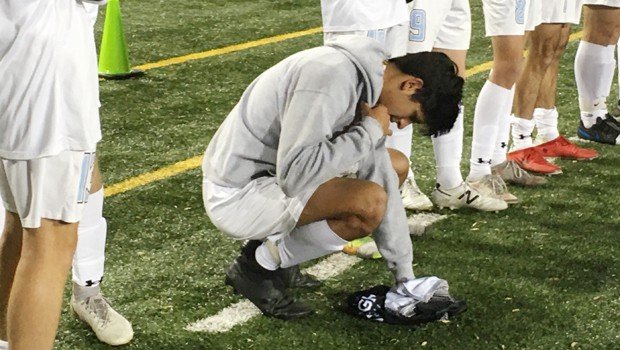 In their fourth consecutive final, the Mustangs cannot cash in on their scoring opportunities in loss to James M. Bennett

The Mustangs sidestepped them all, without allowing a goal the entire time.

Unfortunately, a scoreless final at Loyola University’s Ridley Athletic Complex was their undoing Friday night as the Clippers from Wicomico County prevailed, 4-2 in a shootout to send Wright to a second straight title match without claiming a championship, after winning back-to-back crowns in 2017 and 2018.

“C. Milton Wright sets the standard in 3A,” Bennett coach Gabe Kane said. “They’re the last team I’d want to play and the first team I’d want to beat. I asked their coach (Brian Tully) if he ever gets bored being here, and he told me it never gets old.”

Although the Mustangs had their chances, Tully said that they “couldn’t find that one moment” to break through a tough Bennett backline.

Still, in the 14th minute, the senior midfield combination of Ethan Bender and Adrian Gonzalez came close to giving C. Milton Wright an early lead when Bender found Gonzalez for a header that glanced off the crossbar before the rebound came back to him for another header that Bennett senior keeper Jack Mitchell corralled.

The Salisbury-area school’s best chance in the first half unfolded three minutes earlier on a dangerous cross from leading scorer Wainer Anescar that was adroitly cleared by the Mustang defense.

Wright had another opportunity to move in front with 7:30 left in the opening period when senior midfielder Jonathan Klein directed a pass to junior midfielder Drake Kongkraphun, who settled the ball and then sent it just wide of the far post.

Early in the second half, the Mustangs used some nifty interior passing from sophomore forward Matt Luk to senior midfielder Caleb Carpenter, whose short strike just missed the near corner.

With 18:40 left in regulation, Kongkraphun sent a turf-hugger a few feet wide as the scoreless minutes mounted.

Mustang senior defender Matt Shoap had a good look at the goal with just under 10 minutes to go, although his shot carried wide and high.

With six minutes remaining in the first overtime, Gonzalez (team-leading 15 goals, 4 assists) just missed a header on a ball played to him by Jon Akers, a senior defender who then whistled a shot wide a few seconds later.

Adams came up big in the second extra session when he stopped a 5-yard shot by the always-dangerous Anescar to maintain the scoreless status quo.

Other than that, the Mustangs pretty much kept the talented striker under wraps.

“He’s electric on the ball,” Tully said about the Clipper star, who totaled 18 goals and 11 assists this season. “He floated around a bit, and when he was in the middle one our center backs (junior Aaron Coogan or Akers) would man-mark him. If he was going to hurt us, he was going to have to go through a couple of guys to do it.”

The shootout did not go Wright’s way, as only two of its four shots (by Gonzalez and Luk) found the net.

The Clippers’ didn’t miss on any of their four offerings.

Tully had a similar take.

“It’s disappointing,” he said. “But so is life sometimes.”

Despite its loss to James M. Bennet, C. Milton Wright has now appeared in four straight state finals, winning the first two and placing the second at the last two.