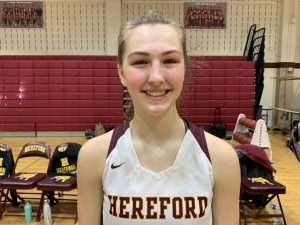 Reese Harden saved the best for last for Hereford Saturday. The junior scored eight of her 14 points in the fourth quarter and drew a key charge, helping the Bulls past Gwynn Park in the Class 2A North Region girls basketball final in Parkton.

The junior guard scored eight of her team-best 14 points in a riveting fourth quarter to lift the 19th-ranked Bulls to a 54-52 victory over Prince George’s County’s Gwynn Park in the Class 2A North Region title game in Parkton.

For the first time since 1999, Hereford (22-1 overall) will play in the state Final Four. The Bulls will meet River Hill, which won the South Region crown Saturday, in a 2A semifinal Friday at 3 p.m. at Towson University’s SECU Arena.

Hereford owes a huge debt to Harden, who did it on both ends in the critical final minutes. Her jumper from the elbow, put Hereford up, 53-52, with 37 seconds remaining in regulation.

Gwynn Park (20-5) was called for traveling and Harden was fouled with 5.2 seconds remaining. She converted the front end of an one-and-one, but missed the second.

Harden got the rebound and ran out the remaining time.

“Fortunately the ball came to me,” she said. “And thank goodness I grabbed it.”

The Bulls trailed 52-49 when Harden drew a charge with 56 seconds left. The Baltimore County school parlayed it into a fast break basket on a court-length inbound heave from Cam Smith to senior guard Libby May.

“It was a total team effort,” Harden said, playing down her heroics.

She said that drawing the charge was a matter of timing.

“I saw her (Gwynn Park senior guard Kroix Dale) coming, and I knew I could get to the spot before she did. It was definitely a charge.”

The game started with both teams stone cold and the Bulls grinding out a 6-2 lead after the first quarter and they still led, 19-16, at the intermission.

Junior guard Jacqueline Dianis then torched Hereford’s defense for 11 of her 16 points in the third quarter, nailing three consecutive 3-pointers and a burying another jumper to give the Yellowjackets from Prince George’s County their biggest lead at 33-25 midway through the period.

The Bulls fought back on a jumper and a free throw by Harden and a triple by senior forward Brynne Deluzio to make it close heading into the final frame.

Smith’s three-ball to open the fourth quarter made it even closer as Hereford kept within striking distance until making a final successful assault behind Harden.

“I didn’t sub her out the whole game,” Hereford coach Ellen Fitzkee said. “She played all 32 minutes. “I told Reese that this was her time. Our players look to Reese and she has the skills to do it.”

Gwynn Park coach Michael Strother, who didn’t have junior center Janae Dublin Saturday because of an injury, said the Bulls made the plays late.

“Hats off to Hereford,” he said. “No. 10 (Harden) is a heck of a player who makes very good decisions with the ball.”

Hereford lost to Allegany in the 1A state semifinal at UMBC in 1999. The Bulls prior state final four appearance was in 1982.