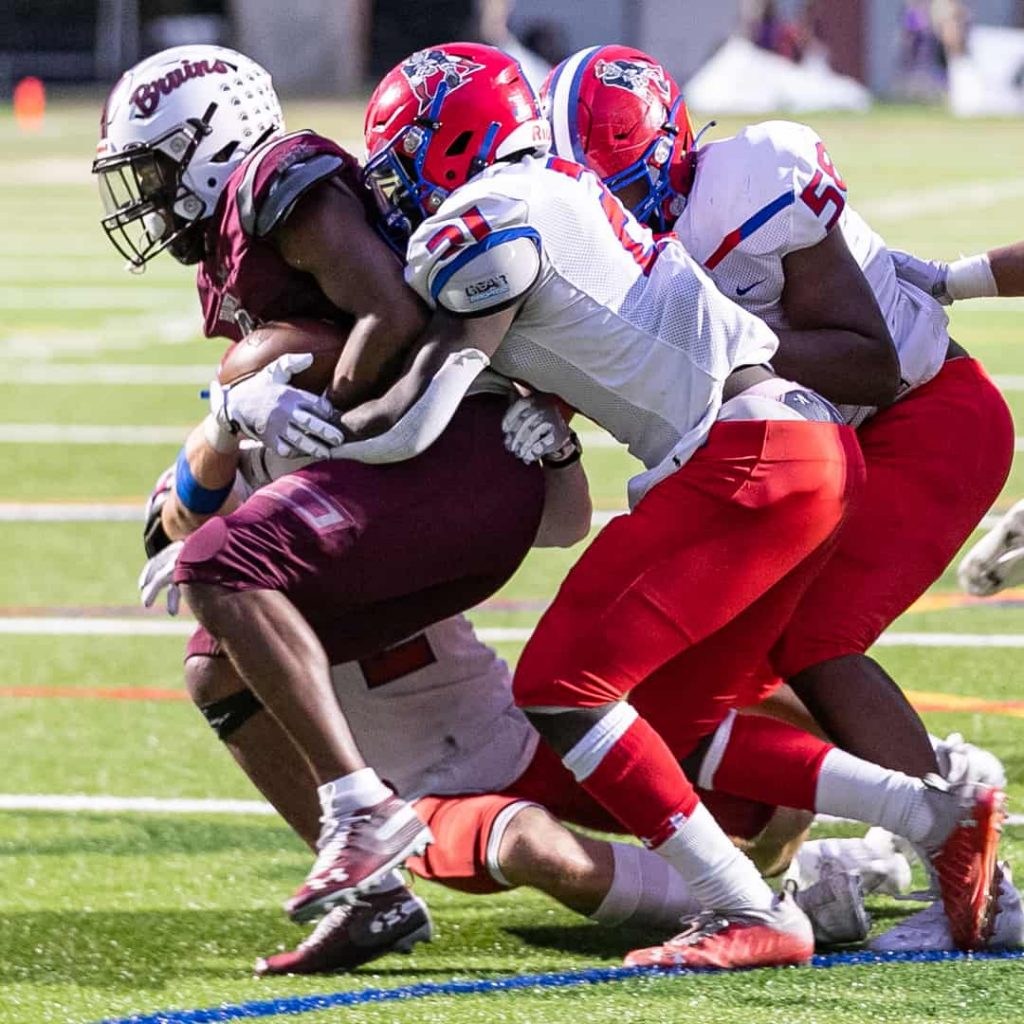 Old Mill’s Da’Von Richardson (right) and Christian Gulley (58) tries to bring down Broadneck’s Davion White during Friday evening’s Anne Arundel County football contest. Down 10 points in the first half, the No. 6 Bruins went on a 34-8 surge to claim a 41-25 victory over the 11th-ranked Patriots in Cape St. Claire for sole possession of first in Anne Arundel. (photo – SportsMajors)

Broadneck High football dominated the second half of its crucial 41-25 victory against visiting Old Mill Friday night. But not for a few key plays in the second quarter, the No. 6 Bruins might not be sitting alone atop the Anne Arundel County league standings.

The Cape St. Claire school has a virtual lock on the league crown, outscoring the 11th-ranked Patriots, 34-8, over the final 25 minutes for its seventh consecutive victory. After securing a 7-0 on a yard quarterback sneak by Josh Ehrlich with 4 minutes, 40 seconds left in the first quarter, Broadneck (7-1 overall, 6-0 Anne Arundel) faced deficits of 15-7 and 17-7 in the second quarter with the ever-present potential for the Patriots to extend that lead.

Instead, the Bruins, who had surrendered an average of 9.4 points per game in their first five county games, came up with a pair of pivotal stops before Ehrlich (14-18 for 147 yards, three passing touchdowns) found Nathan Levicki from 19 yards out in the final play of the first half to dramatically shift the momentum and push Broadneck a victory against Glen Burnie next week from clinching the county crown.

“That was huge for us,” said Bruins linebacker Daelin Brooks said. “We felt like we didn’t have much momentum coming into that quarter because we started having a lot of penalties and miscues with our defense. Just getting a stop and giving our offense a chance to score was huge.”

Largely on the strength of some scrambles by Ehrlich (15 carries for 110 yards, two touchdowns), the Bruins took that  7-0 lead with 4:40 left in the first quarter, but the Patriots answered with 39 seconds left in the quarter on a 32-yard pass from Myles Fulton to Donte Craggette-Drake to tie the game at 7-apiece. The play came after a delay of game and capped a seven-play, 62-yard drive.

Old Mill (6-2, 6-1 Anne Arundel) stuffed Broadneck on it’s next drive and then quickly took a 15-7 lead on a 2-yard sneak by Fulton, who kickstarted the drive with a 21-yard pass play to William Ennis down the visiting sideline. Christopher Booze followed with a nifty 29-yard run to set up Fulton’s score with 9:20 left in the half.

That advantage grew to 17-7 with 2:57 remaining in the second quarter on a safety as the snap on a punt attempt by the Bruins was scooped up by center Ryan Della, but he was tackled in the end zone.

Broadneck, however, cut the deficit to 17-14 on the final play of the half on a 19-yard strike in the back of the end zone from Ehrlich to Nathan Levicki. The drive began following an interception by Jalen Carter that came on the first play after the safety.

“That was huge, a huge momentum swing,” Ehrlich said. “I think time expired (on the touchdown connection), so that was awesome. Nate Levicki played well tonight. He showed out tonight. I’m proud of him and I’m proud of everyone on this team.”

Daelin Brooks was part of a Broadneck defensive effort that held Old Mill to a score in the second half. The Bruins have won seven straight games.

Carter’s pick on a long throw down the middle of the field was the first of the two huge momentum-stopping plays by the Broadneck defense, which stuffed the Patriots a yard short on the Bruins’ 7-yard line on fourth down and three yards to go with 5:08 left in the first half.

“It was huge; our guys were playing well,” said Old Mill coach Mike Pfisterer Jr. “I’ll take all the blame on that fourth and three call and the one-shot call here (on the interception). I mismanaged and that’s all on me. It was a huge momentum shift.”

A seismic shift that certainly seemed to continue into the second half as the Bruins scored on four of their first five drives after halftime before running out the clock on their final possession to pull away at 34-17 with 2:39 left in the third quarter.

“We were rolling,” Ehrlich said. “It was fun to get us going on the ground again. Davian ignited us with that spark on that run play on the first drive. When we get going, I don’t think there’s anyone in the state who can stop us. That was really cool to get going.”

That offensive onslaught began with a five-play, 65-yard drive for a 21-17 lead at the 10:20 mark of the third quarter on a designed keeper by Ehrlich from nine yards out. Davion White (166 rushing yards) started that possession with a 27-yard run as he looked to be shot out of a cannon and nearly scored had it not been for a nudge out of bounds.

Ehrlich and Levicki hooked up again, this time on a 19-yard play-action pass, for a 28-17 lead with 8:10 left in the third, an advantage that grew to 34-17 with roughly 2 ½ minutes remaining in the third quarter when Ehrlich found a wide-open Kyle Pierce in the right corner of the visitor’s end zone. The only blemish during that offensive onslaught was an extra point was blocked.

The Patriots rallied to cut the deficit to 34-25 on a 15-yard touchdown by Fulton to a wide-open Craggette-Drake at the one-yard line before he stepped untouched into the end zone. Fulton (188 passing yards) then threw a perfect ball to Zafrin Stevens for a successful two-point conversion.

The Bruins, however, put the game away with a 5-yard touchdown run by White that capped a six-play, 51-yard time-consuming drive for the final 16-point lead with 4:24 remaining in the contest.

“They made adjustments; we had a couple of bad snaps,” Pfisterer Jr. said. “The defense played too many snaps. They were on the field way too long and Broadneck capitalized.”