No. 10 Broadneck boys roll to first state final four since 1997; girls take another step in 4A state repeat bid 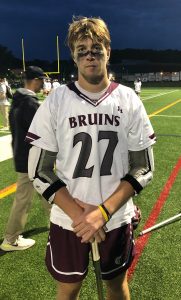 Tyler Hicks helped Broadneck boys lacrosse advance to its first state semifinals in three decades Wednesday. The sophomore had two goals and an assist in the 10th-ranked Bruins’ 17-2 victory over No. 19 Dulaney in a state quarterfinal in Anne Arundel County.

Broadneck High boys lacrosse coach Jeff McGuire had plenty to relish about his team’s 17-2 shellacking of visiting Dulaney during Wednesday’s Class 4A state quarterfinals, particularly the Bruins keeping their collective foot “on the gas.”

And with the way the Anne Arundel County squad rolled into their first state semifinal appearance since 1997, that pedal must have been connected to an Italian sports car. Broadneck, in fact, put on an offensive clinic in the first half en route to an insurmountable 11-1 halftime lead as nine different players recorded a goal, including back-to-back long, violent strikes from Tyler Hicks in the second quarter and two scores from Jake Schroll.

“We just want to play fast and loose and be disciplined,” said McGuire, whose squad is seeking its first state final berth since it captured its last championship in 1997. “I think we did what we’ve been doing all year and came out firing and then kept our foot on the gas, which I’m proud of. Our guys are just playing with extreme confidence right now.

“We just have to carry that all through when we play Friday. In the postseason, everyone’s producing, that’s where you want to be.”

Broadneck exploited Dulaney’s defense from all around the crease as the Lions were at times out of position, slow to react, or supplying too much space to their counterparts.

Conversely, the Bruins hounded the Lions’ attackers all over the field, disrupting Dulaney’s offense with powerful checks that led to turnovers and counterattacks.

“Broadneck’s an excellent team all the way around,” said Dulaney coach Kyle Fiat, whose team crushed its first two playoff opponents by a combined 38-0 score to snare the North Region I  crown. “We had a hard time competing on any spot on the field. We came in with some hopes the outcome wasn’t going to be what it was, but you know, our guys played hard. They fought to the very end. We didn’t execute our game plan. I’ve got to give credit to Broadneck. They’re an excellent team.”

After the teams traded goals in the opening minute-plus, the Bruins went on a 16-0 run that lasted until the final seconds of the match when Luke Pezzulla netted Dulaney’s second goal of the match and the first since the 10:53-mark of the first quarter.

Besides Hicks and Schroll, the Bruins, who had 34 more shots and 15 more faceoff victories, received two goals each from Tanner Boone, Ryan Salazar, Kyle Pierce, and Davis Fisher, who also produced a game-high four assists. Broadneck had 11 players in total produce at least one goal and nine contribute an assist.

“Everyone knows what we’re doing together, and we all know our places and where to go when we’re running sets and plays, so we create a lot of movement,” Hicks said. “We’re very confident. We’re buzzing, and we’re just going to keep it going from here. It’s great to be able to do this for the school.”

The top-seeded Broadneck girls lacrosse continued its quest for a second straight 4A state crown in emphatic fashion, besting eighth-seeded and visiting Dulaney, 17-5, in a state quarterfinal contest Wednesday evening.

Lexi Dupcak and Reagan Baldwin paced the potent Bruins offense with each netting four goals while Sam Lavorini chipped in three scores to help Broadneck (15-3) open up an 11-2 halftime lead that increased to as much as 17-2 as the match wore on in the second half.

Mary Moore added four assists and a pair of goals for the Bruins, who will now face fifth-seeded Sherwood of Montgomery County in the state semifinals.

“I thought the defense, tonight, set the tone early, which, I thought, was great. We were able to feed off of that. They were playing very tough defense, covering cutters, talking and communicating. (Goalkeeper) Chloe (Rand) had a great game.” 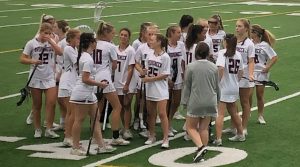 Broadneck girls continued its 4A state title defense with a 17-5 decision over Dulaney Wednesday in Cape St. Claire. The Bruins will play in the state semifinals this weekend.

Rand finished the contest with 11 saves, including a couple early that stymied any hopes of a quick start for the Lions.

Five different players scored a goal each for Dulaney, including Mia Connor and Megan Hoskins, who also contributed an assist each.