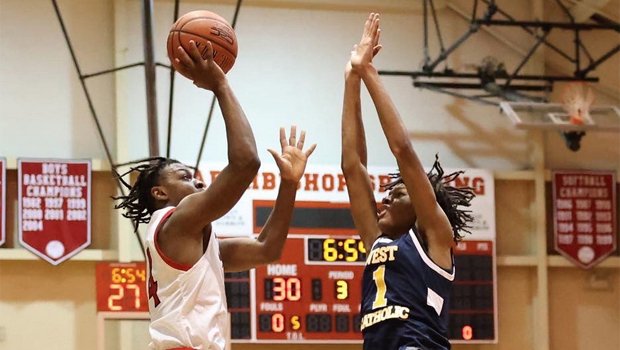 After solid efforts from Archbishop Spalding High and Calvert Hall College, the St. Frances Academy basketball team was poised to finish a local sweep in the DTLR Classic Monday evening at Spalding. 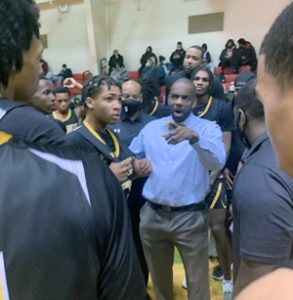 St. Frances head coach Nick Myles (center) challenges his team during a timeout during Monday’s game with Imhotep (PA). The Panthers fell short in this battle of national ranked teams.

Imhotep Academy (PA) had other ideas. The Philadelphia school topped the No. 1 Panthers, 75-68.

“They got every offensive rebound and we lost every 50-50 ball,” said Myles, whose team’s six-game winning streak was snapped. “Sometimes a loss is a lesson, hopefully this is a lesson.”

Imhotep never trailed in the second half, opening up a 52-44 lead late in the third quarter after a follow-up by Taylor, capping an 8-2 spurt. The Panthers climbed to 56-54 on a Davis’ 3-pointer with 5:42 left in regulation.

Imhotep answered with an 8-1 run, starting with an offensive board and basket from reserve Chad Anglin. An alley-oop flush by Edwards and a Taylor dunk, off a steal by Barano, made it 64-55.

The Panthers cut the deficit to four twice in the final minute, but Imhotep got the appropriate response, including a windmill dunk by Edwards.

Edwards, a 6-foot-7 Top 10 recruit in the Class of 2023, with offers from Kentucky, Maryland and Ohio State, gave St. Frances fits all over the floor.

The Panthers didn’t help their cause Monday, missing seven free throws in the final quarter.

The East Chase Street school will have to regroup with No. 2 Spalding coming to Phelps Gym Friday evening for a first-place battle in the Baltimore Catholic League.

“We got to be tough, it’s all about effort,” said Myles. “I’m very critical of myself and my staff. You can coach a lot of things, but normally you don’t have coach effort on Chase Street. If we got to reset the culture and coach effort, that’s what we’ll do starting tomorrow.”

The first season of the Gary Neal Era at Calvert Hall has had its expected ups and downs. The Cardinals are on an upswing after a 58-52 victory over Georgetown Prep in the opening match.

Calvert Hall trailed 14-11 after the opening quarter, but, thanks to seven points in the second frame from Williams, The Hall had the lead, 25-23, at halftime.

The Towson school stretched the lead to 38-32 after three quarters, then converted 12 of 14 free throws in the fourth to pull out its second straight victory after dropping its previous four decisions. 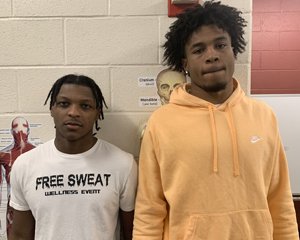 Jordan Pennick (left) and Cam Whitmore sparked Archbishop Spalding basketball to a big victory. Whitmore finished with 23 points and 12 rebounds while Pennick scored 16 of his 21 points in the second half as the No. 2 Cavaliers topped previously undefeated West Catholic Prep from Philadelphia in the DTLR Classic in Severn.

With its biggest tests of the season on the horizon, No. 2 Spalding gained major confidence, handing previously undefeated West Catholic Prep from Philadelphia its first loss, 81-67.

In a physical tussle, the Severn school didn’t back down, improving to 12-2 on the season. Senior guard/forward CJ Scott added 15 points.

“Today was a really good win for us…West Catholic is a typical Philly team, up in your face, pressure, playing defense, playing the passing lanes,” said Spalding coach Josh Pratt. “They were physical and it was nice to see us respond, especially in the second half.”

“We came out in the second half and played tough,” said Whitmore. “We stayed sharp and kept our focus.”

Trailing 31-28 at half, Spalding ceased command in third, behind Pennick, who scored 10 in the frame, and Scott added seven. Whitmore, 6-foot-6, flexed with 12 points in the fourth as the Cavaliers pulled away. Kaseem Watson finished with 22 points for West Catholic (8-1).

“The first half we played sloppy, but Coach Pratt dug into us and we bought in,” said Pennick, who scored 16 in the second half.

Pratt said winning the defensive boards over the final 16 minutes was a major factor.

“When they started pressuring us I think it fit into what we normally do. We like to go uptempo,” said Pratt. “We shared the ball really well, I thought we were really positive during timeout…if we continue to get better, the goal is to win a championship.”

Wednesday evening, Spalding travels to No. 3 Our Lady of Mount Carmel in a match-up of Baltimore Catholic League title contenders as well as a battle for sole possession of first in the MIAA A Conference’s Red Division. Friday, the Cavaliers play at top-ranked St. Frances.

“It’s going to be tough,” said Pennick, whose team lost to both squads in an abbreviated campaign in 2021. “We have to be physically and mentally ready.”

“These next couple of weeks are really going to tell what we’re about…how we can rise above adversity,” said Pratt.

Pictured above: Spalding’s Jordan Pennick goes up for a jumper during the third quarter of his team’s win over West Catholic (PA), Monday in the DTLR Classic. He scored 16 of his 21 points in the second half to help the Cavaliers prevail.