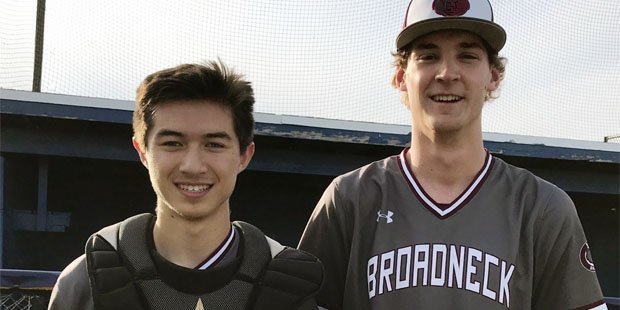 Nick Gatton did what he normally does pitching – rung up nothing but goose eggs under the direction of his junior battery-mate Jackson Halla – and his Broadneck mates put up six runs in their final at bat to make their ace a winner by 6-0 over No. 10 Chesapeake-AA in Lake Shore on Wednesday afternoon in Anne Arundel County League action.

No. 8 Broadneck is the Anne Arundel County leader at 10-2 overall and 9-2 in the league after going 10-11 in 2018. There is no question that Gatton has become one of the key reasons for the turnaround.

Gatton became the first Anne Arundel County pitcher to toss four consecutive shutouts and the four no-run games ties the county record for a season, held by five other outstanding hurlers, as he scattered seven hits, struck out two and did not walk a batter on just 78 pitches.

“He was pounding the zone with his fast ball and his off-speed pitches have been looking really good,” said Halla, a rare high school catcher who calls the pitches, a responsibility given to him by his coach Matt Skrenchuk. Skrenchuk, a former Coaches All-County catcher at Arundel in 2007, has a lot of confidence in Halla, who missed the 2018 season due to Tommy John surgery.

“In the first few innings we were going change-up and then he told me to go curve ball, but his fast ball was his best pitch today.”

Gatton returned the compliments to his battery-mate saying, “I have a lot of confidence in Jackson. He calls a great game. Chesapeake has a great hitting team and it was definitely a challenge today just like North County was, last time I pitched (nine days ago). My defense played well behind me.”

The Bruins erupted for six runs on four hits in the top of the seventh inning to give Gatton more than enough runs to put the game in the win column. Gatton proved to be the stopper after the Bruins had lost to Northeast, 3-2, on Tuesday while Chesapeake (8-4, 7-4) was defeating No. 11 Severna Park, 6-3.

“Everytime Gatton goes out there he gives us a great chance to win,” said Skrenchuk. “Our guys play with a lot of confidence behind him, and we’ve played some good defense. Ryan Smolen moved over from third to shortstop this year and has done a great job. Jackson has handled our pitchers very well and been great defensively.”

Smolen had six assists, two putouts and a meaningless error in the bottom of the seventh.

Matt Isaac and Dylan Tenney, the four and five hitters in the lineup, were each 2-for-4 for the Bruins and drove in the big runs in the big inning. Isaac’s fielder’s choice broke the ice making it 1-0 with the bases full and Tenney followed with a two-run single. A Chesapeake miscue and RBI knocks by Nick Toskov and Jackson Halla capped the scoring.

The Bruins had left nine on base, including the bases loaded in the second inning, before their breakthrough frame.

A 6-foot-7, 200-pound right-hander, Gatton, who is planning on pitching at Stevenson University next spring, has now thrown 24 consecutive scoreless innings in his record four straight shutouts. North County’s Mike Wooden threw three in a row in 1995 to tie Chesapeake’s Bobby Bianco who first turned the trick in 1988.

Wooden also set the record for consecutive scoreless innings at 30.1 in ’95 and tied the county record of four shutouts in a season joining four others.

Gatton, a four-year varsity player who didn’t start pitching until last season, has notched his four blankings on a pair of seven inning games against Severna Park (3-0) and Chesapeake, a six-inning 10-0 rout of Southern and a five-inning, 10-0, rout of North County in which he threw the first four innings and not the fifth because he sat for 45 minutes during a rain stoppage.

Two former Franklin High phenoms, Larry Meekins and Bryan “”Moose”” Haas (1974), hold the state public school record for most shutouts in a season (7) and the flame throwing Meekins also holds the state most consecutive scoreless innings of 53.2 in 1970.

Dylan Young pitched well in defeat for Chesapeake going six innings, giving six hits and striking out six on 101 pitches. His only walk went to Smolen leading off the last inning and coach Ken King removed him. Smolen scored the run that proved to be the winner dealing Young the loss.

The Cougars’ standout on offense was senior Tyler Shadle who went 3-for-3 (all singles) against Gatton, his summer teammate on the Monarchs. Several players on both teams played on the Monarchs.