Broadneck remained Anne Arundel County’s only unbeaten football team Friday night, going to 4-0 with an impressive 45-9 romp over Arundel at Carroll Field/Pugliese Stadium in Gambrills, all while getting real-time feedback on their performance via digital TV.

It was great viewing for the VSN 5th-ranked Bruins to watch during the game as they smoked one of their fiercest rivals in the 15th-ranked Wildcats (2-2).

The Bruins are Anne Arundel’s only football team with an operable TV on their sideline during the game. Coaches and players constantly come over to the TV to watch parts of the game and specific plays. Head coach Rob Harris in his seventh season with the Bruins held a fundraiser to purchase the unique piece of technology that has enhanced the teaching part of the game for his coaches.

Players can go over to the TV after making a big or sensational play and take it in and the coaches can call guys over to see things they need to correct or do better.

“To my knowledge we might be the only team in the state to have it,” said a smiling coach Harris. “And, we are taking advantage of it as a teaching tool.”

No doubt as evidenced by Friday night’s production, the Bruins are learning and producing big time results.

Davis had another outstanding game at the controls, completing 18-of-35 passes for 282 yards and three touchdowns. His partner in the backfield, Carcamo, carried 20 times for 190 yards and a pair of TDs. Williams, Davis’ go-to guy, had his second straight game with a career high nine receptions. Williams is a 6-foot-1, 185-pound Division-I prospect who has been offered a scholarship to West Virginia. He had nine catches for 165 yards and two TD’s, matching his output from the week before in a rout of Severna Park in which he had nine grabs and 164 yard for 2 TDs.

The younger brother of Emmett Davis, who is at the Naval Academy, this Davis appears to have a better arm than his older brother. In his last two games, Davis has thrown for 634 yards and 7 TD’s. The man who sets up the passing game with his hard and fast running by using every inch and pound of his 5-7 frame is Caccamo.

“We started slow tonight, but Jason sets things up for us and we got it going,” said Williams, who has been starting since his freshman year.

Broadneck held a mere 3-0 lead after the first quarter on a 28-yard field goal by senior Nicky Orofino, who also plays in the Bruins secondary and had six extra-point kicks on the night. Carcamo tallied his first TD on a 7-yard run on the seventh play of the second quarter to make it 10-0 Bruins, but the Wildcats answered on their next possession on a 51-yard dash by Darius Hunter on a counter to make it a 10-7 game.

The Bruins then engaged in a furious finish to the half scoring two more TD’s for a 24-7 lead at the break. Davis hit Ken Hudson on a 14-yard TD pass and with 39 seconds until intermission, Davis connected with Williams for a 32-yard six-pointer. The Williams TD catch was set up by a Genovese interception of a pass by Wildcat lefty Ryan Sedgwick. 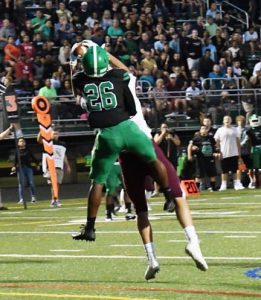 With an Arundel defender draped on his back, Broadneck’s Ken Hudson makes a excellent leaping grab for a 14-yard touchdown reception. (Photo courtesy of Karen McCassie)

Genovese, who is a 4.6 GPA student/athlete, also had three tackles and 1-½ sacks tying senior cornerbacks, Steven Jacobs and Keonte Coates for the most tackles in the game.

Following an interception by Orofino that was fumbled out of the end zone for a safety to make the score 24-9, Broadneck would recover a fumble on the free kick at the Wildcat 35, with 8 minutes left in the third period, and the Bruins would later reel off two more TD’s in a furious finish to the third 12 minutes.

Broadneck scored twice in the last 1:14 of the third stanza – Carcamo on a 1-yard plunge followed by a three-and-out by punt for the Wildcats. The Bruins would take advantage of the 8 seconds left on the clock as Williams leaped to the heavens (great TV replay) for a 61-yard TD pass from Davis down the Wildcat sideline for a game-clinching score that made it 38-9.

“Ethan is my go-to guy and always gets the job done,” said Davis.

Davis would then break into the end zone from the one to make it 45-9 and the running clock (runs after a 35 points or more lead) was then invoked.

“We need to be crisper and start faster,” said Harris, who has 26 seniors on this team that won a state youth championship before high school and it is a group that looks to be on a mission. “Our kids get hyped up to play Arundel.” It’s a great rivalry. “We were a little sloppy at times, but finally got going.”

And the Bruin players loved watching it on TV and didn’t have to rush home to view the highlights.

Pictured above: Behind excellent blocking provided by his offensive line, Broadneck’s Jason Carcamo breaks into the open on a night when he ran 20 times for 190 yards and two touchdowns. Photo courtesy of Karen McCassie.

A – Safety (fumble out of end zone after interception)