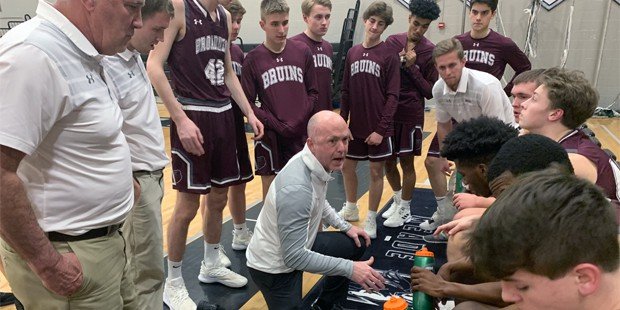 Coming off back-to-back league losses, including an exhausting one-point home setback the previous evening, No. 16 Broadneck High was in need of a big rebound performance, Tuesday, when it ventured out on the road for a key Anne Arundel County boys basketball clash at No. 19 Meade.

The Bruins got just what they were looking for, sinking nine three-pointers, including five in the pivotal third quarter, as they pulled away in the second half for a 69-54 win over the host Mustangs. 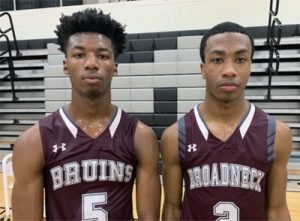 Seniors Jamar Young (left) and Che Colbert each had big shooting nights Tuesday for 16th-ranked Broadneck as Colbert scored 17 and Young netted 16 in a win over No. 19 Meade in Anne Arundel County action.

Seniors Che Colbert and Jamar Young combined for 33 points, including 17 in the third quarter, as the Bruins turned a one point halftime team lead into a 52-40 advantage. The lead grew to as many as 17 points early in the fourth quarter, as the Bruins improved to 15-4 overall and 11-2 in Anne Arundel County.

Meade’s Tre’ Dunn opened the third quarter with a layup to give the Mustangs a 30-29 lead, their first advantage since early in the first quarter. Broadneck, however, responded with a 10-3 run fueled by a pair of thee-pointers from Young and the Bruins never looked back.

Meade’s Mazhi Thames scored 10 of his game-high 22 points in the fourth quarter to help Meade claw within nine points, with 2 minutes, 40 seconds to play, but the Bruins scored eight of the game’s final 10 points to set the final score.

“We were excited to have the opportunity to get back out there this evening,” said Broadneck coach John Williams. “We had a tough game last night against Annapolis and the ball did not fall our way. They are a very good basketball team and unfortunately they had the final shot.”

Meade (15-3, 10-2 Anne Arundel) looked to continue the Bruins’ woes with a fast start and jumped out to a 6-0 lead with consecutive three-pointers from Thames. Broadneck, however, asserted its advantage on the glass and amped up its defense to go on a 12-4 run and take a 12-10 advantage, as Andrew Rose and Colbert capped the flurry with back-to-back threes.

A pair of free throws by Thames tied the game for Meade, with 5:40 to play in the second quarter, but the Bruins responded with nine consecutive points and they led 29-20. Over the final two minutes of the half, however, Meade charged right back, scoring eight straight points, including a sensational put-back dunk by Dunn, to close within one at the intermission.

“We have a really deep team and a really resilient bunch,” said Thomas on his team’s ability to meet each Mustang challenge. “We were led by our seniors this evening – Nick Gatton, Jamar Young, Che Colbert and Mike Cantrell. I think they really led the way for us. I was really proud of how we took care of the basketball in the fourth quarter. I felt like we really worked the clock and it is something we have really been working on.”

According to Young the team got a wake-up call at the half.

“Coach yelled at us a little bit (at the half) and we came back out and marked up their best player, Mahzi (Thames), and played defense,” said Young. “Our defense creates our offense when we play good defense.”

“We just knew we had to bounce back,” said Colbert. “That was one of our main tasks, to bounce back. We had to forget about that loss and put it in the past, come back and do what we had to do today. We have so many bigs that are versatile, when they kick it back outside, we know we have to shoot it and they do the rest.”

Veteran coach Mike Glick, in his first year with Meade was also pleased with the effort of his young team.

“It’s a very competitive league and I was impressed with the way we battled back at the end of the second quarter,” said Glick. “Broadneck shot the ball very, very well and three-point shooting is the difference in the game. We have a lot of young guys and we just have to get better.”

Click, who once had a MIAA/Baltimore Catholic League powerhouse at Archbishop Spalding and most recently coached at Prince George’s County’s Gwynn Park, also added that he is enjoying coaching in Anne Arundel County.

“I love it. From a personal side, I love it and I’m very happy I made the move. It’s a lot of competitive teams and a lot of excellent coaches. This is a very competitive league from top to bottom. So, I am having a ball. I love my team. Our team is a very coachable group of kids. I couldn’t be happier. It’s just a matter of getting better.”

As far the Anne Arundel County standings and the chase for the two spots in the league championship game, Broadneck has a half game advantage on both Annapolis and Meade (both 10-2) and No. 17 Glen Burnie is at 10-3. The league also boasts four teams in the VSN Top 20, including No. 18 Old Mill.

Pictured above: Broadneck coach John Williams got the bounce back effort he sought from his team, as the Bruins battled back from two straight losses with an impressive win at Meade.