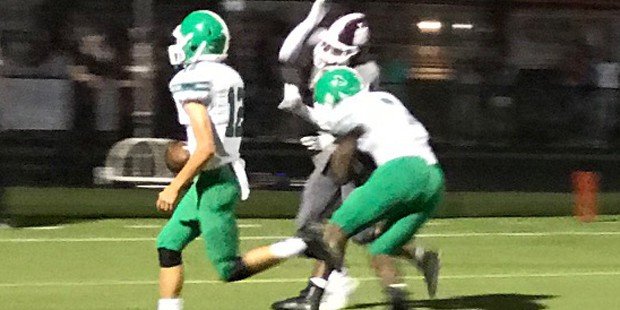 Bruins and Wildcats combine for more than 1,000 yards in total offense 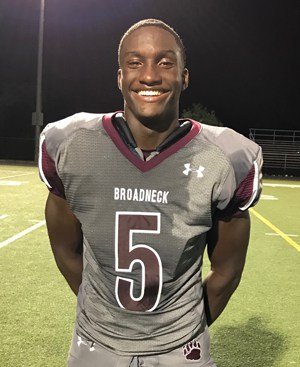 Broadneck coach Rob Harris calls Ethan Williams “the best we have ever had.” He looked like it Friday with seven catches for 209 yards and four touchdowns.

The zebras, with all their yellow flags, shared the spotlight at Broadneck’s Lawrence Knight Field in Cape St. Claire, Friday night, but they could not outshine the offensive display put forth by VSN’s No. 3 ranked Broadneck and No. 18 Arundel, as the host Bruins outlasted the Wildcats, 61-49, in Anne Arundel County football.

It was a matchup of a pair of hot 3-0 teams and they sizzled over three hours and 22 minutes of play.

Once again the Bruins’ Boston College-bound wide receiver Ethon Williams was the difference in the wild game, as his usual potent self, catching passes. The senior grabbed seven passes for 209 yards and four TD’s from freshman quarterback Josh Ehrlich. Williams also threw in a couple defensive gems as well.

The fourth Ehrlich-to-Williams score on a slant that covered 58 yards with 5:19 left in the game may have been the biggest as it gave the Bruins a 48-40 lead after the Wildcats furious second half rally had brought them within a 42-40 deficit.

Arundel’s junior quarterback, Austin Slye completed 47 of 64 passes for 490 yards and five TD’s in pacing a determined comeback that came up a tad short.

The Bruins and visiting Wildcats combined for 110 points, over 1,000 yards of total offense, over 800 yards passing, 10 touchdown passes (five each), 147 plays – 95 run by Arundel which had 29 minutes of possession to 18 by the Bruins, and 41 accepted penalties for nearly 500 yards of real estate.

It was Homecoming at Broadneck and someone said that they were giving away flags at the admissions gate.

“Our defense was exhausted in the second half,” said Broadneck coach Rob Harris emphatically. “They were on the field for 95 plays – 95 plays.”

All of those productive numbers occurred despite a barrage of yellow flags consistently thrown by the game officials. Broadneck was fluffed 21 times for 225 yards and 20 on Arundel for 255 yards. Arundel was assessed penalties for an illegal formation, false start and holding on the same play. 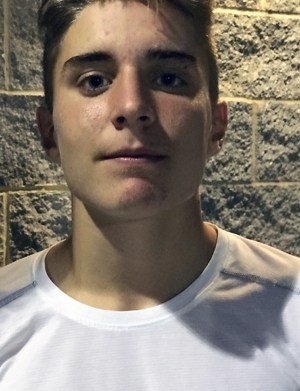 Quarterback Josh Ehrlich looks like anything but a freshman, through four high school games, passing for more than 300 yards against Broadneck.

“I’m embarrassed by the uncharacteristic number of penalties we had,” said Harris, in his 8th year as Broadneck’s head coach. Arundel’s first year head coach Jack Walsh said, “We will use this as a learning lesson for our kids. You can’t beat a team like Broadneck with that many penalties.”

The game started with Broadneck dominating play and making Arundel look like they didn’t belong on the same field as the Cats’ fell behind 21-zip in the first period. That would all change because those Wildcats were not about to quit and were still grinding from the second period until the last when they outscored the Bruins, 28-19.

Ehrlich, who possesses extraordinary poise for a freshman said afterwards that he “had never been in a game this big with a crowd that large, but I just go with the flow,” In this first period, he ran for a score and threw for two more. The 5-foot-11, 165-pound quarterback dashed 41 yards to pay-dirt in the first minute and Vince Facciponti booted the extra point for a 7-0 lead.

Ehrlich proceeded to throw a 17-yard TD pass to Williams and led Andre Woods perfectly for an 80-yard pass and run TD for the 21-0 lead. Arundel got on the board twice in the final 2:30 of the first half with the Bruins sandwiching a score in between to take a 28-14 lead at intermission.

The Cats’ got an 11-yard TD pass from Slye to Petey Tucker, the first of three scoring connections between them, with 2:30 left as the comeback commenced. After Broadneck got a 1-yard plunge from Ehrlich to make it 28-7 with 0:57 left in the half to cap a six-play 79-yard drive, Slye hooked up with Chaz Goodman from 24 yards out with no time left to put the score at 28-14 Broadneck.

It took an hour and 22 minutes to play the first half due to all the stoppages by the flags and subsequent conferences of the officials on the field, each one of the guys now equipped with nifty earpieces to really be tuned in.

The third period would feature a 14-7 advantage by the Bruins to take a 42-21 lead into the final 12 minutes. RJ Chandler started the scoring with a one-yard grab on a Slye pass and Jacob Fahringer’s kick made it 28-21 with 7:41 left the third.

Broadneck pushed it to 35-21 on a slick one-handed snatch by the 6-foot, 200 pound Williams as Ehrlich sent the bluechip receiver upstairs for the score and the two would hook again with 1:25 remaining in the third quarter. Williams gathered in the Ehrlich aerial on third and long after a false start penalty on the Bruins and the play covered 80 yards to make it 42-21.

“Ethon is a big target and great player,” said Ehrlich, who will be a three-sport athlete at Broadneck, expected to also play basketball and baseball a la his older brother Drew Ehrlich, who is a starting strong safety at Villanova after a brilliant career at Gilman school. “He’s helped me a lot and so have the other seniors and players in accepting me as a freshman leader.”

Slye’s 2-yard run cut it to 42-28 at the start of the final stanza and then the Wildcat QB would toss a pair of TD passes to Tucker from 19 and 11 yards out to cut the deficit to 42-40 with 5:32 left in the game. Arundel, however, failed on a two-point conversion pass. Tucker would finish tied with Chandler each catching 15 passes – Chandler for 176 yards and Tucker for 140 yards.

The TD pass to Tucker set the stage for what might have been the biggest play of the game (coaches Harris and Walsh, Williams and Ehrlich agreed) with 5:19 remaining. Ehrlich went over the middle on a slant to Williams coming from right to left and the pass-and-run beauty covered 58 yards for a 48-40 lead.

On Arundel’s subsequent possession, Slye was sacked and fumbled on the run on first down and 10 at the 35, caused by linebacker Viliami Po’uha, whose dad Sione Po’uha is an assistant coach at Navy after playing six years in the NFL with the New York Jets. The ball ended up in the hands of Josh Cain who raced 30 yards for a score and huge 55-40 lead with 5:08 left.

Arundel answered with a 9-play 80-yard drive culminated by Gereme Spraggins one-yard dive and suddenly it was 55-47 and it would get closer on an intentional safety by Williams who ran back 35 yards to the end zone on fourth down with only six seconds left as the Bruins ran the clock down.

“There were a lot of mental mistakes and dirty plays but we got it done,” said Williams.

On the ensuing kickoff with Broadneck leading 55-49, Arundel tried the old pass and pitch back to the open man attempting to go the distance, but there was that man Williams again. This time the Bruin leader forced a fumble and Po’uha gobbled it up and ran it in to cap the scoring at 61-49 as time expired on the frenzied return.

“I just hope our kids don’t hang their heads because they gave it a fantastic effort,” said Walsh, who was named the Baltimore Touchdown Coach of the Week, lat week, after leading the Cats to their 3-0 start.

Pictured above: Arundel quarterback Austin Slye scores on a 2-yard run to start a wild 28-19 fourth period comeback attempt by the Wildcats, before the bowed 61-29.