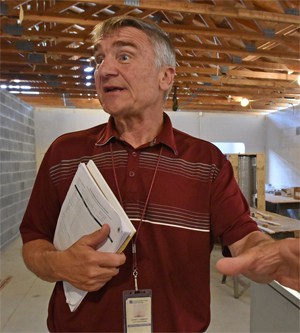 The basketball court at Broadneck High School was officially dedicated as “Coach Kaz Court” prior to Friday’s boys’ basketball game between the Bruins and visiting Annapolis, in honor of long-time basketball coach and athletic director Ken Kazmarek. Kazmarek retired last year after serving 28 years as the school’s AD.

In an moving pre-game ceremony a “Coach Kaz Court” emblem, underscored by his signature, was unveiled and the coach spoke about the honor. Unfortunately for the home squad, Annapolis won the game, 60-46.

Kazmarek was a member of the original faculty at the Anne Arundel County school, which opened in 1982. He became the Bruins’ basketball coach in 1983, and was named athletic director in 1991.

During his 19-year tenure as basketball coach, Kazmarek was a glowing 296-179. He had 15 consecutive winning seasons, including six 20-win seasons in a row, leading the Bruins to the state semifinals in 1986 and 1995.

“I’m honored and humbled,” said Kazmarek. “I owe this tribute to my mentors, and the coaches who I have worked with at Broadneck over the years.”

Kazmarek said he hired close to 60 coaches during his tenure as AD. He was once an assistant coach to legendary Annapolis boys basketball coach John Brady. Brady won 722 games and 22 county championships in a remarkable 39-year career.

“I learned a lot about the game working with John,” said Kazmarek.

Although he retired from Broadneck last summer, he still officiates MIAA basketball, and was recently appointed as coordinator of officials (7,000 strong) for the MPSSAA.

“Those jobs keep me challenged, and keep me involved. I’m grateful to have both opportunities at this stage of my career,” Kazmarek said.