Broadneck’s Tyrice Watson has running room as teammate blocks for him during Friday’s Class 4A East Region football semifinal against Meade. Watson scored two second quarter touchdowns as the second-ranked Bruins produce 28 points in the frame en route to a 35-6 win over the No. 12 Mustangs in Cape St. Claire. (photo – Karen McCassie)

Broadneck High football team was fully aware about “the curse.” In the previous four seasons, an undefeated Anne Arundel County champ failed to win the Class 4A East Region title. Three times, the team was eliminated in the opening round.

After a scoreless first quarter against Meade in Friday’s East Region opener, the No. 2 Bruins appeared to be in harm’s way at Lawrence E. Knight Stadium. Then came the second quarter.

Broadneck exploded for 28 points in the frame, and cruised to a 35-6 victory. Junior back Tyrice Watson rushed for two scores for the Bruins (11-0), and Davis threw for more.

The Cape St. Claire school forced five first half turnovers en route to its first home playoff win since 2009. The Bruins will host southern Maryland ‘s North Point, a 20-19 victor over No. 14 Arundel Friday evening, this coming Friday for a spot in the state 4A final four.

It’s only second time the Anne Arundel County champ and East top-seed survived the opening weekend. Last year, Old Mill lost to Broadneck in the opening round after a perfect regular season.

The Bruins experienced disappointment in 2014 after Old Mill exited quickly after going to 10-0 in 2013. In 2015, Old Mill got out of the opening round, but lost to Broadneck in the East final.

Bruins coach Rob Harris said he talked about it with his team.

“It wasn’t pressure…we’re not that team or the three teams before that,” said Harris. “2014 was Broadneck, but it’s not these guys. It’s nothing anybody can hold over your head because it’s not you.”

“We’ve been talking about it week,” said Bruins junior linebacker Matthew McAllister. “It feels lovely to win at home.”

The Bruins protected their house, turning four Meade miscues into three touchdowns in the final 3:41 in the opening half. After a Keonte Coates interception, Davis found Ethon Williams down the sidelines for a 45-yard touchdown.

The Bruins recovered a Meade fumble inside the Mustangs’ 10-yard line with 1:38 remaining in the half. Three plays later, Watson barrelled into the end zone, helping extend Broadneck’s lead to 21-0.

The Mustangs weren’t able to cleanly handle a short kick, and Broadneck recovered. On the next play, Davis connected with Andre Woods for a 37-yard touchdown with 18 seconds remaining.

Meade (8-3), which took the Bruins to the final seconds before falling, 28-21, during the regular season, got its lone score in the third quarter on Alijah Mateen’s 41-yard pass to Erick Johnson. Friday was the Mustangs’ lowest offensive output of the season.

“We got the job done. On offense. On defense,” said Watson, who scored the game’s first touchdown in the second quarter. “We were there for each other the whole game.”

Harris said “ball security” and being accountable was the task for his squad.

“I was real happy with practice this week. The energy and focus was back,” said Harris. “We weren’t super clean, but we are blessed to have two great runners who can grind it out.”

The Bruins will host North Point Friday in a battle of unbeatens. North Point is 2-0 vs. Anne Arundel this season, routing Old Mill in the season opener.

Only once in the last seven seasons, the East Region’s top seed has advanced to the state semifinals.

“We’re in the playoffs now and anybody can beat anybody,” said Watson. “It’s going to be harder than ever.” 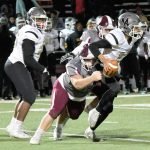 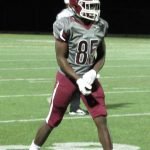 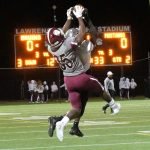