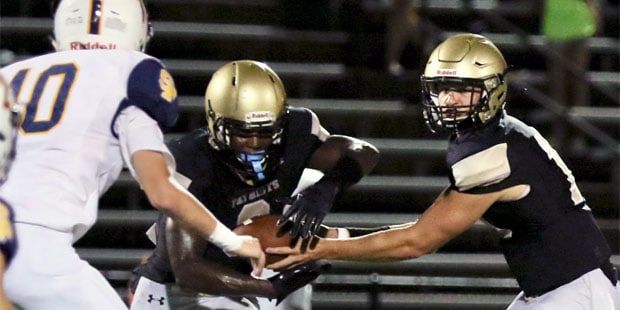 Less than a week after switching to quarterback, Austin Brinkman leads John Carroll football to a season opening win

by Gary Adornato
A standout slot receiver and linebacker since arriving at John Carroll, Austin Brinkman had no clue he would begin the 2019 season as his team’s starting quarterback. That changed just one week ago.

With just one week of preparation at quarterback, John Carroll’s Austin Brinkman was poised in the pocket, throwing for 108 yards and two scores. (Photo courtesy of Kim-Kreider Muhlenfeld)

With just a few practices to learn a position he had not played since the seventh grade, Brinkman displayed the poise of a veteran signal caller, Friday night in Bel Air, throwing for two scores and rushing for another to lead the Patriots to a come-from-behind 29-10 MIAA B Conference win over visiting St. Paul’s.
Brinkman, who is being heavily recruited by Division I schools as a long snapper, was asked to lead the offense by his father, John Carroll head coach Ken Brinkman, as the quarterback position remained in flux late into training camp.
After a sluggish opening quarter, the Patriot offense, led by Brinkman, kicked into gear in the second quarter, scoring 29 unanswered points, after falling behind 10-0, to win going away.
“We had a couple of challenges over the summer and he came to me, the team came to me,” said Ken Brinkman. “They wanted the opportunity for him because of the leadership role. He hasn’t played at quarterback since the seventh grade, but last week I gave him a series against Franklin and he looked well. So, we said, alright, lets give it a chance this week and I think he stepped up. We have a lot of athletes and he knows all he has to do is get those guys the ball in space and let them do the work. His leadership keeps our team going.” 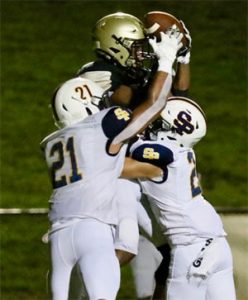 Sandwiched between a pair of St. Paul’s defenders, John Carroll’s Malik Scott came down with this difficult catch before spinning and extending the ball into the end zone for a touchdown. (Photo courtesy of Kim Kreider-Muhlenfeld)

In the early going, St. Paul’s, led by former John Carroll quarterback Scott Smith, a junior, drew first blood, driving 72 yards on its first possession and scoring on a 44 burst around left end by senior standout Logan Santos, to take a quick 7-0 lead.
A high snap in punt formation, on John Carroll’s next possession, resulted in a Crusader first down at the John Carroll 20. St. Paul’s was unable to advance the ball, but got back on the scoreboard with a 31-yard field goal by Damian Ramos, to move in front 10-0.
Brinkman finally got the Patriots moving on their third drive, as he connected for a pair of completions for 28 yards to move into St. Paul’s territory, late in the opening quarter. A personal foul call and a 15-yard run by Brinkman helped give the Patriots a first-and-goal at the Crusader four, before Brinkman scored on a 4-yard run up the middle, on the first play of the second quarter.
Three plays later, John Carroll’s Caleb Atabong picked Smith and returned it 44 yards to the St. Paul’s 17. A holding call pushed the Patriots back, by Brinkman responded with his first touchdown pass of the season, a 25-yard strike to Dominic Berndt, pushing JC in front, 13-10, with 8:47 to play in the opening half. One second before intermission, Gavin Green booted a 21-yard field goal to send the Pats to the break with a 16-10 lead.
“I was worried that we came out that slow,” said Coach Brinkman. “We didn’t move the ball the first series, which I though we could. They came right down, but we slowly persevered, put one touchdown at a time on the board and came away with the victory and I’m very proud of the guys.”
John Carroll put the game away in the third quarter, as Brinkman tossed an 11-yard touchdown to Scott and Nik Gray returned a fumble recovery 21-yards for the team’s final score. Gray recovered two fumbles in the game, while Atabong and Amon Brown came up with interceptions.
“It was the same attitude we walked into this game,” said Austin Brinkman of his team’s confidence after falling behind early. “We’re going to be in a dogfight all game. Going down 10, heads were hanging a little low, but we picked ourselves up. We were able to respond and put those 29 on the board.”
Brinkman finished with 108 yards passing as he completed 10-of-18 attempts. He also rushed eight times for 54 yards. Senior running back London Drummond led the JC ground game, rushing for 84 yards on 12 carries.
For the Crusaders, Smith was 12-for-17 for 106 yards with two interceptions, while Santos led St. Paul’s ground game with 71 yards on nine carries.
St. Paul’s coach Scott Ripley knew his young team was in for a challenge.
“MIAA football is great football,” said Ripley. “Anybody can win on any given night. Tonight we had a lot of young kids playing. We’re a young program and we competed to the end. I think we’ll be there at the end. We just have to keep playing hard.”
Pictured above: Newly appointed John Carroll quarterback Austin Brinkman hands off to teammate Roman Hemby in the Patriots 29-10 season-opening win over St. Paul’s. (Photo courtesy of Kim Kreider-Muhlenfeld).
JOHN CARROLL 29, ST. PAUL’S 10
SP 10 0 0 0 — 10
JC 0 16 13 0 — 29
1ST Q
SP – Logan Santos 44 run (Damian Ramos kick)
SP – Ramos 31 FG
2ND Q
JC – Austin Brinkman 4 run (kick blocked)
JC – Dominic Berndt 25 pass from Brinkman (Gavin Greene kick)
JC – Greene 21 FG
3RD Q
JC – Malik Scott 11 pass from Brinkman (Greene kick)
JC – Nik Gray 21 fumble return (run failed)