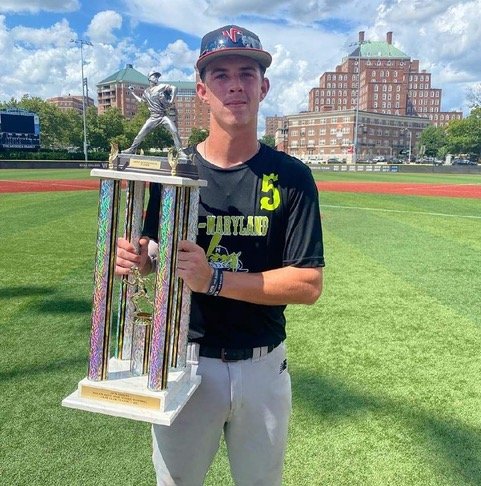 Unlike the mythical God of Thunder of the same name, who crushed villains with a hammer and then an ax, this Thor, as in North County High rising senior Thor Hildebrand, used an aluminum bat and his hard-throwing right arm to comfortably help Maryland subdue the All Mid-Atlantic All-Stars, 10-1, at toasty Babb Field.

Hildebrand, a third baseman/pitcher, belted a pair of doubles to left field, including one that hit the base of the wall, scored twice, stole two bases, drove in a run, induced a walk, and worked a scoreless inning in relief to power the Maryland All-Stars to its first win in the series since 2019.

Maryland holds a 11-9 edge in the series, which began in 2003 under the guidance of Old Mill graduate Lou Holcomb, the founder and President of Diamond Recruiting.

“I think I did very well from both sides (of the plate),” said Hildebrand, who faced the minimum three batters during his time on the mound. “Being two way, it’s good to go out there and do it both ways. When both of them are good, it’s really nice.”

Hildebrand, the game’s Most Outstanding Player, belted a ground-rule double in the second inning, stole third base, and then scored on a wild pitch to give Maryland a 3-0 lead. He doubled again in the fourth to drive in a run for a 6-0 advantage through 3 ½ innings. Hildebrand finished with a walk, a stolen base, and a run scored in the top of the seventh.

“That first one – that kid on the mound is a hard thrower – I was expecting to go (opposite field), but I was able to pull him, and then the second AB, I got jammed a little bit, but I thought it was going to go. I’ve got to hit the weight room,” Hildebrand joked. “This is a big event, and this is my first year doing it, so it’s really nice to kind of like show out. It’s a great opportunity. My goal was to just get a couple of hits, kind of show out a little bit, show out in front of coaches, show hustle (but) I never expected I’d come in a win an MVP.”

Speaking of MVPs, Mount St. Joseph senior catcher Jack Bahouth earned the combine’s top prospect award for the Maryland All-Stars, displaying a 94-mile-per-hour exit velocity during Friday’s workouts at Calvert Hall College, while also sporting a 4.78 grade point average. Bahouth continued that stellar performance Sunday, going 2 for 3 with a double, an RBI, and a run scored in the victory.

“I felt good about my swings today,” Bahouth said. “I was just working on being aggressive early, and I think I accomplished that. It worked out. I caught a couple of barrels and had a couple of hits. It was interesting catching for a couple of pitchers I’ve never seen before. All threw really well. It was a fun day. I’m always competitive, so it’s nice to have the win for sure.”

Maryland’s top performers also include Mount Hebron junior Mike Brogno, who collected a pair of hits, including a double in the third inning, scored twice, and opened the game on the mound with a scoreless inning, and Perry Hall’s Alex Mendoza reached base twice and drove in a run. Liberty’s Dominic DiBlasi and Kevin Hyde combined for two scoreless innings while Mount St. Joseph senior Tyler Holton closed out the contest with a 1-2-3 bottom of the seventh inning in what was a dominant performance on the mound by the Maryland squad.

“It was awesome,” Brogno said. “It was great coaching and great players. It’s great to see good competition. We played a good game. I enjoyed it. We really hit the ball today. Played good defense. The pitching was good. Everything was working for us. It was good to see everyone play really well.”

Calvert Hall sophomore shortstop Thomas Pilarski powered the All-Maryland Futures All-Stars to a 4-3 win in the preliminary and inaugural Futures Classic with a two-run triple to center field in the top of the sixth inning. His drive gave Maryland the final one-run advantage and earned him Most Outstanding Player honors.

“It was the first year doing that,” said Holcomb, who is a member of the Old Mill’s Hall of Fame. “It was the inaugural future’s game, which had younger kids playing in it (2025 and 2026 graduates) just to get a little taste of it. We used to play one nine-inning game, so I divided it into two seven-innings games. I think that the flow was a little better. Sometimes, the nine-inning games would drag a little bit.

“It gives more kids a chance to play in the all-star game because we get over 100 some odd kids to try out. We kept the rosters smaller at 12, so everybody played and got at-bats.”

Per the norm, the long-standing event, including Friday’s combine, welcomed in numerous college coaches, including those from the Naval Academy, Penn State, and Rider, as well as York (PA) College, Washington College, and McDaniel College.

“A lot of first-year colleges at the college level (attended), so that was good because they got introduced to players in the metro area,” said Holcomb, who played in the Texas Rangers organization after a stellar career at the University of Maryland.