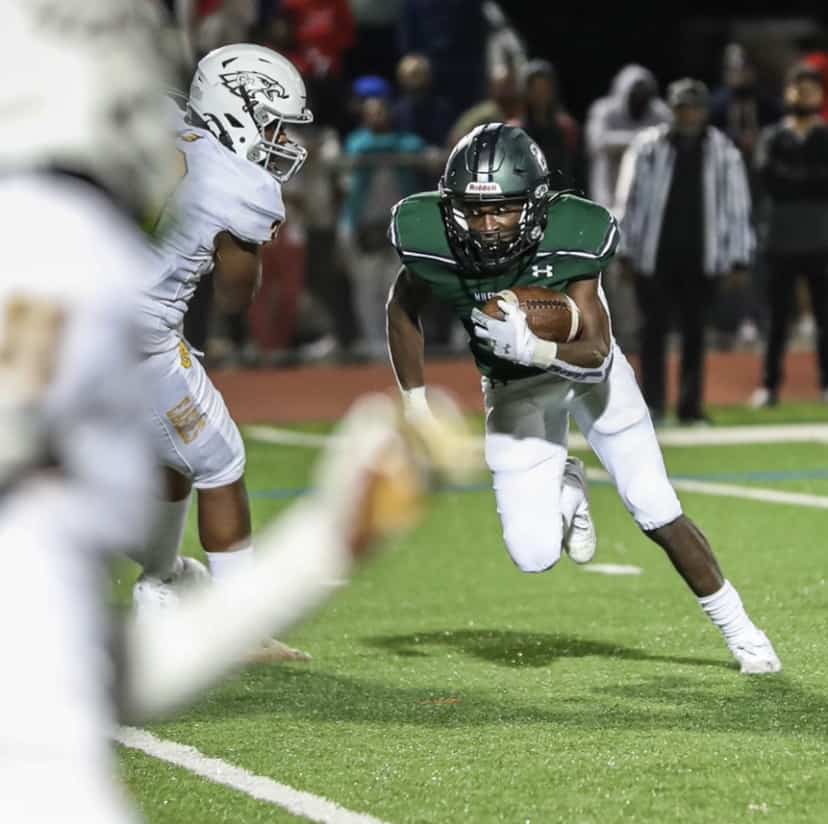 Chris Butler broke out for Milford Mill football Thursday evening. The senior scored rushed for 116 yards and 4 touchdowns as the 10th-ranked Millers pulled away from previously undefeated Owings Mills in a Baltimore County contest on Washington Avenue. (photo – Sports Majors)

by Derek Toney
Because of a logical issue, the Owings Mills High/Milford Mill Academy football game, originally scheduled for Friday, was moved to Thursday evening, giving the Baltimore County schools the spotlight for the latest area weekend slate.
Chris Butler and the Millers did not disappoint. No. 10 Milford Mill defeated Owings Mills, 29-6, in  Northwest Baltimore County. Butler rushed for 116 yards and four touchdowns for Milford Mill (3-1 overall) and senior Shamar Brooks had a fumble recovery and interception.
The Washington Avenue school combined a strong running game and timely defensive stops to remain undefeated (3-0 league) in Baltimore County’s Division II. Kamar Cosby scored for Owings Mills (3-1. 2-1 Division II), which entered Thursday undefeated.
“We weren’t nervous but respectful of the points they were putting up,” said Millers coach Reggie White. “We started executing and things popped in the second half.”
“We definitely did a heck of a job,” said Butler, a senior.
Butler, a 5-foot-8, 155-pound transfer from Green Street Academy, crossed the end zone Thursday on runs of 5 (two), 25 and 3 yards. Senior quarterback Tasheen Howard added 95 yards on 15 carries.
White honored the offensive line of Mekhi Hebron, Herrington, Darrell Outlaw, Kamari Banks, and Chevaughn Smith with the “game ball” in the postgame huddle.
“We played fast and physical,” said Herrington, a 6-2, 265-pound junior. “We got the job done.”
After stalling after moving from its 16 to Owings Mills’ 20 on its opening possession, Milford Mill finished on its next offensive series. The Millers went 57 yards in 14 plays as Butler converted on 4th-and-goal from the 5.
Late in the third, Butler exploded through a gap and went 25 yards into the end zone, extending Milford Mill’s lead to 13-0. The drive, seven plays and 60 yards, was set up by Brooks’ fumble recovery off senior defensive linemen Daquan Stevenson, swiping the ball from Cosby.
Cosby atoned on the Eagles’ next possession, scoring from 3 yards to cap a 6-play, 52 yard series, bringing the visitors to within 13-6 with 9 minutes, 2 seconds remaining in regulation. The Millers shifted momentum back as Butler broke a 33-yard run.
Two plays later, Butler had his third touchdown, putting Milford Mill up, 21-6, with 7 minutes to play. Less than a minute later, Butler returned to the end zone with his final score after Brooks’ interception and return.
“Chris is so explosive…he’s a tough guy,” said White, excited about his running attack with Butler, Howard and freshman Lamonte Royster.
Stevenson and junior Byron McCoy each recorded sacks for Milford Mill’s defense which pitched a shutout for three quarters, despite Owings Mills breaching Miller territory on three consecutive drives from late in the first half until early in the fourth.
The Eagles, off to their best start since 2014, had a promising start Thursday as Milford Mill fumbled the return on the opening kickoff and Zaire Smith recovered at the Millers’ 28. But Owings Mills fumbled on its first offensive play and Milford Mill recovered.
Behind the running of Wesley Beckett (13 carries, 108 yards) running, the Eagles advanced from their 30 to Milford Mill’s 15 late in the second quarter, but time ran out. They reached the Millers’ 21 before turning the ball over on downs to open the second half.
Owings Mills again crossed Milford Mill territory after an 18-yard pass from Amari N’mandi Hall to Kenneth Wilson. Cosby (18 carries, 52 yards) slipped out of pressure in the pocket and headed downfield, but lost the ball and Brooks recovered.
Eagles coach Travis Hall said mistakes his team overcame the first three weeks wasn’t possible against Milford Mill.
“At the end of the day, it’s the same old story offensively, too many turnovers,” said Hall. “Defensively, we didn’t come to play mentally…got pushed around on the defensive line. We got bullied.”