No. 2 Spalding fends off John Carroll; Whitmore and Peterson combine for 45 (VIDEO HERE!) 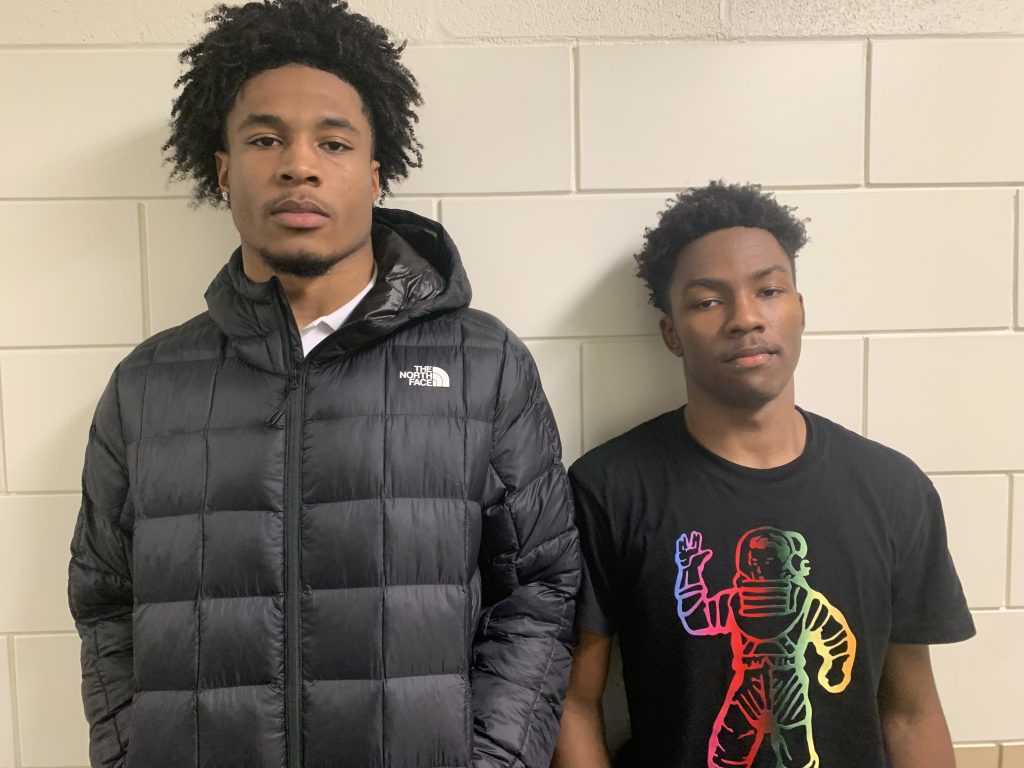 Cam Whitmore (left) and Ty Peterson helped Spalding basketball return to victory Monday evening. Whitmore had a game-high 25 points and Peterson finished with 20 as the second-ranked Cavaliers withstood a second half charge from No. 5 John Carroll School to win, 82-71, in Bel Air.

The Cavaliers would not let that happen. No. 2 Spalding leaned on its veteran experience to recover with an 82-71 victory over fifth-ranked John Carroll School in a Baltimore Catholic League match in Bel Air.

The Severn school saw a 16-point advantage down to just three in the fourth period, but pulled away to improve to 16-3 overall, 5-1 in BCL play. Friday, Spalding controlled play against St. Frances Academy for most of regulation before the top-ranked Panthers got a 3-pointer in the closing seconds for a 75-73 decision on the Cavaliers’ home court.

“We watched a lot of film on Friday, obviously, and talked through some things, and we had a really good practice yesterday,” Spalding head coach Josh Pratt said. “Execution is a big deal, and we still struggled with that tonight. (The Patriots) are the reigning champions, so you’ve got to reverse the ball, you’ve got a move and defend, and your help-side’s got to be really good. We attacked the basket and were fortunate to be in double bonus early.”

Spalding finished 19-of-25 from the free throw line Monday as Peterson and Whitmore combined to go 8-of-8 in the closing minutes.

“Their pressure created foul opportunities,” Pratt said. “We took advantage of the free throws down the stretch.”

Spalding led 45-33 at halftime and 63-52 entering the fourth before reigning BCL Tourney champ John Carroll made its move. With leading scorer Tyson Commander in foul trouble, TJ Vaughn and Max Snellenberg hit back-to-back 3-pointers, bringing the Patriots to within 65-62 with six minutes left in regulation.

They got no closer as Spalding was able to convert 11-of-14 free throws in the final frame to maintain. Whitmore had 10 points in the frame, including a crucial four-point swing of two technical foul shots and a slam dunk.

“We learned our lesson from the last game,” Whitmore said. “Coach Pratt said we had to keep the ball flowing, and that’s what we did.”

Josh Rivers made four 3-pointers and scored 14 overall for Spalding, while Jordan Pennick finished with 12.

Commander scored a team-high 25 points for John Carroll (10-7, 3-4 BCL) which also had four players in double figures. Vaughn and Terry Long, Jr. each scored 13, while Jeannot Basima finished with 12.

Patriots coach Seth Goldberg, whose team put together a scintillating run to the BCL crown last season, wasn’t surprised by his team’s second half push.

“Our program is built on being together and being tough, and we had moments of that tonight,” Patriots head coach Seth Goldberg said. “We got great minutes from our guys off the bench, but it was an uphill battle. It was a tough night and we’ll continue to learn from it and continue to grow from it.”

“We were able to beat a really good team on the road tonight, but it’s onto the next game,” Pratt said. “Nothing’s been won yet, and our goals are still the same.”