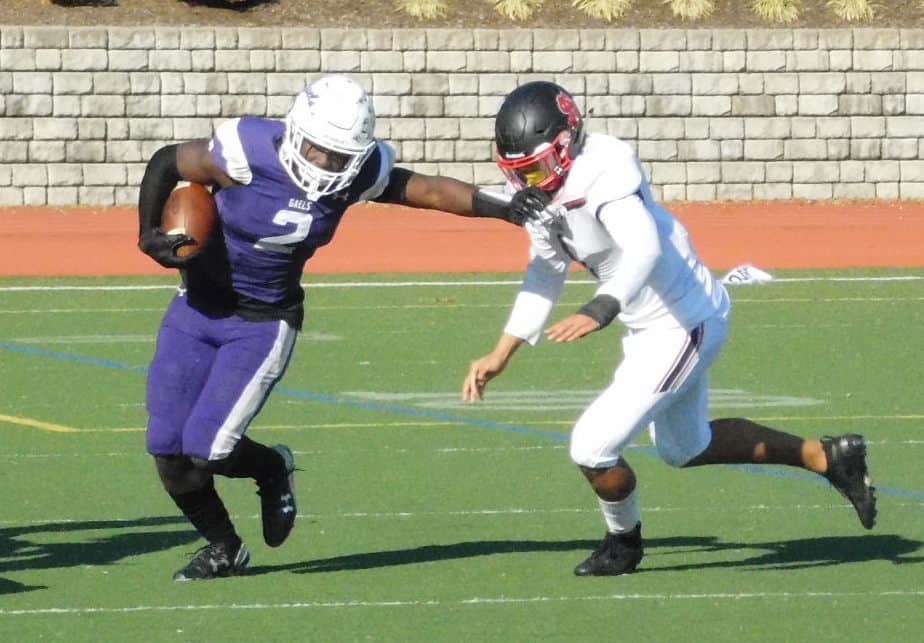 Mount St. Joseph’s running back Marlowe Wax puts aside Spalding’s Kellan Wyatt during a run in the first half of Saturday’s MIAA A Conference football game. The No. 2 Gaels scored the final 42 points in a 49-7 rout of the fifth-ranked Cavaliers at John Pleyvak Field in Irvington.

It didn’t take long to get clarity.

The No. 2 Gaels dismantled the fifth-ranked Cavaliers, 49-7, at John Pleyvak Field in Irvington. Junior quarterback Will Atkins threw for 413 yards and five touchdowns for the Gaels (8-2 overall, 3-1 MIAA A), and senior Dont’e Thornton finished with six receptions for 165 yards and two touchdowns.

In a front of Senior Day audience including Penn State University head coach James Franklin, Mount St. Joseph put up a running clock in the second half to secure the No. 2 seed for the MIAA A playoffs. The Gaels will host third-seed and fourth-ranked Calvert Hall College in a semifinal contest next Saturday in Southwest Baltimore.

“I hope that are kids are peaking at the right time, the kids really came to play and executed at a high level,” Mount St. Joseph coach Rich Holzer said. “I am very proud of the guys, you draw up any play you want, if they don’t execute, it doesn’t work.”

“It’s all team, going out and making plays it all them,” Atkins IV said. “I just put the ball out there and they go get it, it’s all them.”

“It felt amazing, last year against them [Spalding] we had a good game in the first half and then slowed things down in the second half,” said Thornton, a 6-foot-5 junior. “This game we knew we had to pick it up a lot and that’s what we did today.” 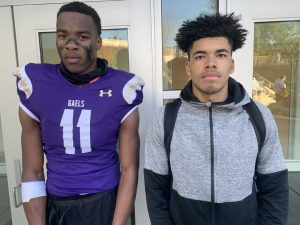 Dont’e Thornton and Will Atkins were in harmony for Mount St. Joseph’s offense Saturday. Atkins threw for 413 yards and five touchdowns, two to Thornton, who finished with six receptions for 165 yards.

“We executed perfectly today, 49-7, we will take that any day,” Fique said. “Guys were crushing it on offense, we were doing our job on defense, you can’t ask for more.”

It was 7-7 after Shamar Esbrand-Smith tight-roped down the sidelines for a 56-yard touchdown for Spalding. Atkins threw an out to Thornton, who quickly turned up inside and sprinted to the end zone for a 77-yard score.

The Gaels were just getting started. Syracuse commit Marlowe Wax went 61 yards, using his blockers to get into the end zone, extending the lead to 21-7. Atkins got his third touchdown pass in the half when he connected with Wilkens for a 68-yard score.

“That is how we design the offense, with these receives it is quick strike and finally looks like it is coming around,” Holzer said. “We are making the big throws and catches and the guys are playing really well right now.”

Late in the half, Atkins and Crawley hooked up for 61 yards to Spalding’s 5-yard line. Three plays later Wax (134 yards) broke Spalding’s defense for a 2-yard touchdown run for a 35-7 halftime advantage.

The Gaels’ first touch in the second half was methodical, starting from their own 36. Atkins completed passes to  Crawley and Thornton for 11 and 13 yards, respectively. Wax ripped off a 15-yard jaunt up the middle and Atkins finished an 8-play drive with his second scoring throw to Wilkens, starting the running clock.

After taking No. 2 and top-seed McDonogh School to overtime last weekend and needing a win to create a three-way for second, Spalding played its worst game of the season Saturday. Once 5-1, the Cavaliers will limp into a rematch with McDonogh next weekend in Owings Mills.

“There is some looking in the mirror for us, we are better than that,” Schmitt said. “We have to bounce back and come out play, no one on this team is going to quit. We got a week to fix things and improve and we will get right to it.”

Mount St. Joseph will welcome Calvert Hall to Pleyvak Field next weekend for a spot in the title game at Whittles Field Nov. 16. The Gaels defeated the Cardinals, 20-10, at Russo Stadium to open MIAA A play. 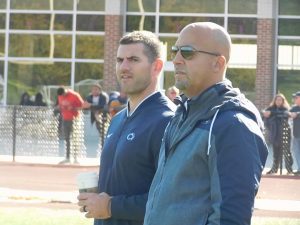 “We have to have a really good week of practice, we already played them once, so we know that we they are going to have some adjustments,” Thornton Jr. said. “We just have to come out with the mentality that we are going to beat them.”