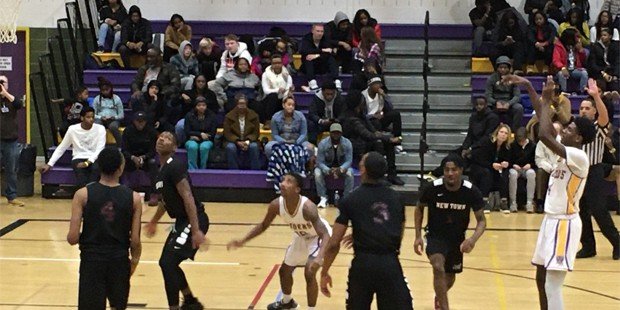 Having already matched last year’s win total, Loch Raven High had a chance to make a statement against New Town in a showdown between Baltimore County Division I unbeaten Friday night inside Diane George Gymnasium in Towson.

The visiting Titans weren’t having any of that.

No. 6 New Town used its rebounding prowess early to control the contest and then pulled away on a barrage of 3-pointers in the second half to deal the upstart and 17th-ranked Raiders an 83-60 setback. 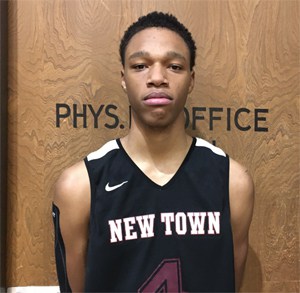 “We wanted to get on them early,” said New Town senior Stephon Marcano, who led all scorers with 21 points. “Coach (Derek Wise) emphasizes rebounding, and we got a lot of second-chance shots. That boosted our momentum, and we didn’t want to give them any confidence.“

After bolting to a 10-2 advantage in the first quarter spurred by senior post player Andrew Mills’ fierce work on the offensive glass, the reigning league champ Titans (8-1 overall, 3-0 Division I) were briefly caught flat-footed by the Raiders’ 11-2 run that gave them their only lead, 13-12, of the contest with under three minutes remaining in the first period.

Senior guards Sean Powell, Chris Gaines and Christian Johnson and sophomore forward Cortez Johnson led the way during that spurt for the Raiders (10-2, 1-1 Division I).

Loch Raven also knotted the score at 15-15 and 17-17, only to fall behind for good on two free throws by New Town senior guard Martaz Robinson to begin a 10-0 sequence that ensured the Raiders would never get closer than six points the rest of the way.

Senior Kyree Johnson’s coast-to-coast burst off a steal at the buzzer gave the Titans a 38-26 halftime bulge that grew in the third quarter once Marcano began his assault from beyond the arc that produced three of his team’s five second-half 3-pointers.

Enjoying a 58-43 lead entering the final frame, Wise emptied his bench as all 13 Titans logged playing time and 11 ended up in the scoring column.

Considering that New Town is heading to play in the Stand Against Violence Showcase in Pittsburgh on Saturday, it was good time for everybody on the roster to help garner a quality win without being overworked.

“We knew they were a good team,” Wise said about the Raiders. “Their record speaks for itself. But we set the bar pretty high for ourselves. We wanted to rebound well and share the basketball.”

With the Titans’ reserves seeking the same positive results the frontline players worked hard to accomplish, the fourth quarter tempo matched that of the first three periods.

“They give us a lot of maturity and experience,” Wise said. “And we have a lot of weapons.”

Loch Raven coach Brandon Thomas figured that the Titans would be a lot to handle — and they were — for a program that has not exceeded 10 wins in the last six years.

“I think we’ve been doing really well,” he said “We’re trying to build a culture here — that’s what it really comes down to. And we were playing a historically great team. We wanted to match their intensity and level of late but we didn’t quite do that tonight.”

The Raider boss said that his team had watched videos of the Titans.

“We identified No. 4 (Marcano) as one of their top shooters,” he said. “But we just didn’t close out on him very well. We’re trying to build a culture that’s all about competing — fighting for every loose ball and every rebound. We just didn’t do it as well as they did. But all losses are not bad losses. We’re 10-2, and we’ll learn from this.”