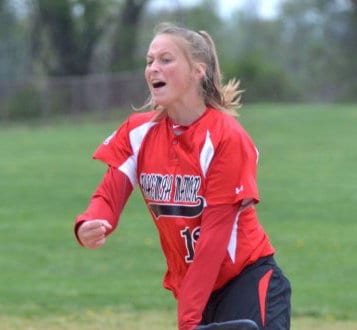 Bohemia Manor High begins the 2019 softball season the way it ended the 2018 campaign — atop the VSN Top 20 rankings.
The Chesapeake City school with just 685 students continues to loom large on the diamond, just ahead of No. 2 Severna Park and third-ranked Chesapeake-Anne Arundel, both of which will contend for Anne Arundel County laurels with No. 18 Glen Burnie.
Bohemia Manor could be tested in the UCBAC Chesapeake by No. 7 C. Milton Wright and 14th-ranked Rising Sun.
The IAAM A Conference is shaping up as a close battle as well, with No. 4 John Carroll attempting to unseat sixth-ranked and defending champion McDonogh while holding off No. 9 Archbishop Spalding. No. 20 Chapelgate Christian Academy is the clear favorite in the B Conference.
Baltimore County looks like a struggle between No. 5 Sparrows Point, No. 10 Eastern Tech, No. 13 Dulaney, 17th-ranked Catonsville and No. 19 Towson. Marriotts Ridge (8th), No. 11 Howard and  No. 16 Reservoir figure to have a kerfuffle in Howard County, similar to the struggle between No. 12 Westminster and 15th-ranked Century in Carroll County.

Pictured above: With University of Auburn commit Maddie Penta back on the mound, Bohemia Manor is the overwhelming favorite for a third consecutive Class 1A state title. The Cecil County school is No. 1 in the first VSN Softball Top 20 of the spring.

Around the horn: With the talented Penta back in the circle, the reigning Class 1A state champs are a heavy favorites to repeat.

Around the horn: Dingess takes over pitching chores for a team that boasts slugging shortstop Kline, a Maryland commit and 2018 VSN Player of the Year from last spring.

Around the horn: Cougars will go as far as Downin’s strong arm takes them.

Around the horn: With Kropkowski returning to toe the rubber after missing the 2018 campaign and Ritter raking at the plate, 2017 champ Patriots become instant IAAM A championship contenders in 2019.

Around the horn: Although Fitzges replaces the graduated Jessica Miller in the circle, the Pointers have enough talent to contend again in Baltimore County.

Around the horn: Eagles return a full lineup of starters for repeat bid in IAAM A.

Around the horn: The Mustangs will again challenge Bohemia Manor in the UCBAC Chesapeake and contend for the 3A state crown.

Around the horn: Nies and Costigan return to help with big bats and strong arms for the Howard County champs.

Around the horn: New coach Delaney Bell takes over for team that will feature talented freshman Amaya Carroll and junior Jordan Moore in the circle.

Around the horn: Mavericks will again be in the hunt for Baltimore County championship and 2A state title.

Around the horn: With sophomore hurler Samantha Hobert expected to take another step, Lions have enough talent to contend again in Howard County.

Around the horn: Owls look to make another run at Carroll County Athletic League title and 3A state crown.

Around the horn: Power-hitting Dasch, sure-handed Modiste and fluid-fielding Isaacson give Lions a strong core as they look to challenge Sparrows Point and Eastern Tech in Baltimore County.

Around the horn: Dill will look to carry Tigers back to 2A state semifinals.

Around the horn: Young and talented Knights have sights on repeat in Carroll County.

Around the horn: Strong hitting should propel Gators back into Howard County race.

Around the horn: Comets primed for big spring with nearly their entire roster back.

Around the horn: Gophers will be determined to have say in Anne Arundel County race.

Around the horn: The Generals will be motivated this spring after 1-0 loss to C. Milton Wright in last year’s state playoffs.

Around the horn: Yellowjackets will be strong up the middle with junior trio Ellie Henneberg (C), Olivia Sunde (2B) and Jess Lucas (CF) complementing Ventkatesan and Edwards for IAAM B title defense.