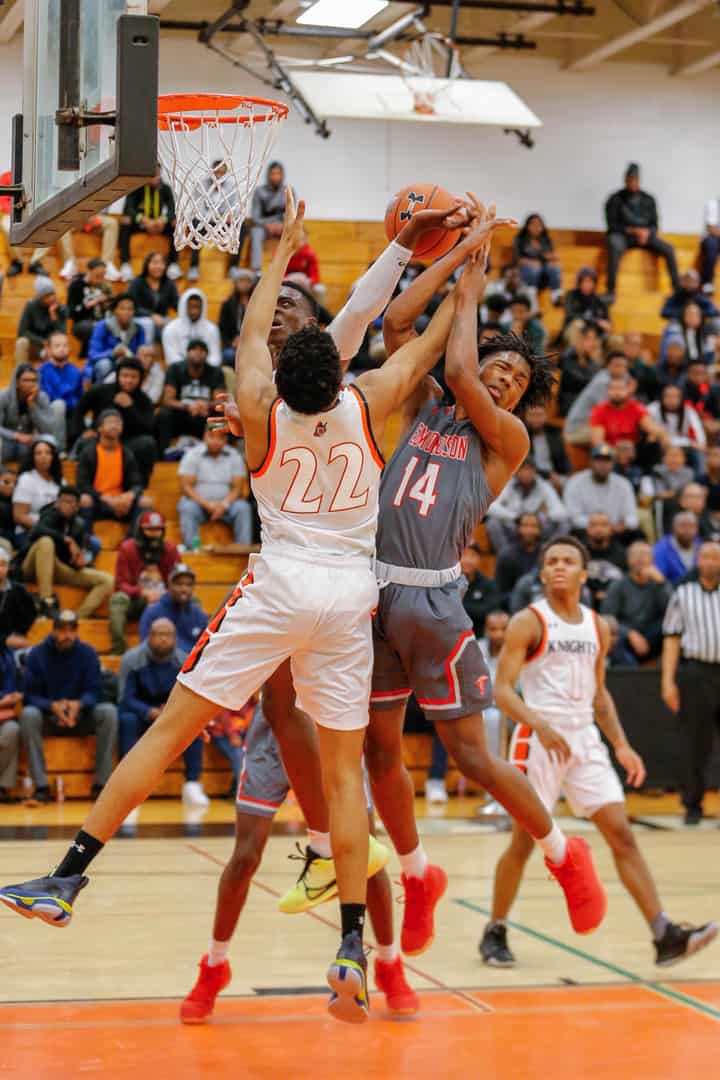 Edmondson’s Quron Jones (14) is met at the basket by City’s Kevin Kulu (22) and Clarence Obiajulu during the second half of Friday’s Baltimore City boys basketball contest. The No. 4 Knights got solid interior play from Kalu and Obiajulu in a 67-48 victory over the third-ranked Red Storm in a battle of unbeaten squads in Northeast Baltimore.

As his team warmed up for Friday’s Baltimore City boys basketball matchup with Edmondson, City College coach Omarr Smith sat in the lead seat on the bench, listening to music on headphones. With huge repercussions in the city title game race, Smith was unusually relaxed.

“I don’t worry when we have big opponents because that’s the type of game they show up for,” Smith later said.

The fourth-ranked Knights were engaged from tip in a 67-48 decision over No. 3 Red Storm on The Alameda in Northeast Baltimore. Junior guard Ahmad Harrison scored 21 points for City and senior Dominic Carrington added 15.

Sparked by tenacious inside play, the Knights led by as many as 23 points, improving to 9-0 overall and 2-0 in the city league Division I. The top team in Division I and II will play for the city championship next month at Morgan State University.

The school affectionally called, “The Castle on the Hill,” stands alone as the area’s only undefeated. The Knights did it with arguably their most complete effort of the season.

Smith said City has been wildly inconsistent in the opening month, playing down to “lesser competition.” Friday, the Knights never trailed Edmondson as Clarence Obiajulu and Kevin Kalu swallowed the visitors in the paint.

“We’ve been playing kind of bad,” said Obiajulu. “We worked harder in practice so the game became easier. It was a good platform to show our talents.”

City began imposing its will in the second quarter as Kalu blocked a Red Storm attempt and sophomore Kai Brooks drained a three-pointer on the offensive end for a 20-11 advantage. Kalu nabbed an offensive board and got a three-point play, pushing City’s lead to 26-13 with five minutes, 29 seconds left before halftime.

Edmondson, sparked by a City technical, pulled to 26-19 late in the period. Eric Chandler Cuthrell answered for City with a 3-pointer from the corner, followed by Harrison’s successful drive to the basket and Kalu’s follow-up, pushing the lead to 33-19 (led 35-21 at halftime).

The Knights did not let up in the second half, going up 52-31 in the third on Kalu’s score inside off an assist by Harrison. It was 60-37 in the fourth after City broke Edmondson’s pressure and Karrell Booker found Kalu for an easy dunk.

Smith said the Knights are still working on their interior passing for Kalu and Obiajulu.

“I told them if we won the battle on the boards, we would win the game,” said Smith. “Kevin and Clarence knew that coming in as well as my guards. Rebounding was the focal point.”

“We just kept scoring, don’t slow the ball down and let them get us out our game,” said Carrington. “We dictated the game.”

Quron Jones had 10 points for Edmondson (8-1, 2-1 Division I), which tied the Knights, 9-9, in the first quarter before the hosts closed with an 8-2 run. The Red Storm was unable to produce transition offense, with Kalu and Obiajulu hovering around the basket, and shoot consistently from the perimeter.

“City played well on the defensive end — getting their hands on a bunch of blocked shots and I think it rattled the kids a little bit,” said Edmondson coach Darnell Dantzler. “I tried to tell them to play through it, give some pump fakes, but they didn’t play well.”

Dominic Carrington had 15 points and Clarence Obiajulu added a double-double of 10 points and 13 rebounds as City improved to 9-0. The Knights are back in action Saturday against 14th-ranked Gilman School in the Baltimore Hoops Festival at St. Frances Academy.

The Red Storm and Knights won’t dwell much about Friday, returning to the court Saturday for the Baltimore Hoops Festival at St. Frances Academy. Edmondson takes on Calvert Hall College while City has another Top 20 matchup, this time with No. 14 Gilman School.

“A lot of my guys know their guys from AAU so I’m pretty sure it won’t take much to get up for this,” said Smith. “Fortunately, Gilman plays tonight also. We’ll get home, rest and get ready for tomorrow.”