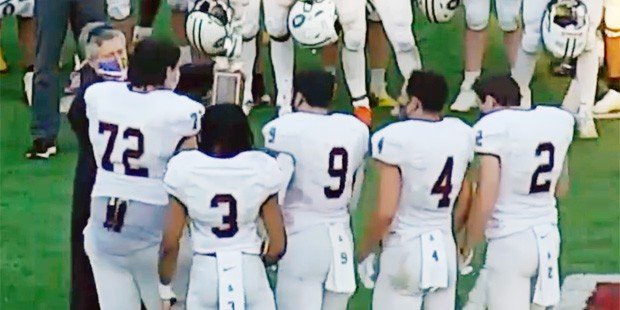 Lakers prevail, 22-17, for their second consecutive win in the rivalry series

Not much has gone well for high school sports this fall, but a few traditions have survived, including the annual rivalry battle between Boys’ Latin and St. Paul’s, which was renewed for the 67th time, Friday afternoon on BL’s Lake Avenue campus.

Defense dominated early in the contest, but St. Paul’s was able to move inside the Boys’ Latin red zone late in the first quarter and capitalized with a 36-yard field goal from kicker Damian Ramos, grabbing the first lead at 3-0.

The lead did not last long.

On the ensuring possessions, BL ground out three first downs and, on the second play of the second quarter, got on the scoreboard with a 51-yard touchdown pass from junior quarterback Kaden Lymon to senior Matt Greaver. Lymon fired a strike over the middle, which Greaver gathered at the St. Paul’s 30. He then broke one tackle and coast up the far sideline to give the Lakers a 7-3 lead.

St. Paul’s made a bid to counter immediately, as they started their next possession near midfield. The Crusaders quickly moved inside the BL 20, but a long sack eventually forced them to settle for another Ramos field goal attempt, this time from 49-yards. Unfortunately for St. Paul’s, the kick attempt was foiled by a botched snap.

That paved the way for a Laker field goal, as BL moved from its own 20 to inside the St. Paul’s 10, before AJ Hernandez converted on a 25-yard field goal that gave the Lakers a 10-3 advantage at the half.

Boys’ Latin waisted no time adding to its lead in the third quarter, and again it was Matt Greaver suppling the fireworks.

On the second play of the second half, Greaver swept around left end and raced 70-yards for his second touchdown of the day. The extra-point attempt failed and the Lakers led, 16-3, with 11:11 to play in the third quarter.

St. Paul’s got back into the contest with a nice drive, late in the third quarter, as they moved 62-yards in less than two minutes with Garrison Curry pulling down a 20-yard touchdown pass from quarterback Scott Smith to pull the Crusaders within six, at 16-10.

Senior Mason Alford-James was the star of BL’s next drive, as he kick-started it with a 39-yard run and then carried it two more times down to the Crusader 11. From there, Hernandez carried for 11 yards and that was followed by a 4-yard touchdown burst by junior Braeden Hammett. A two-point conversion attempt was foiled, by the Lakers now led 22-10, with 23 seconds to play in the third quarter.

With a little over six minutes to play in the fourth quarter, Hernandez missed wide left on a 35-yard field goal attempt that may have iced the contest, but the miss kept St. Paul’s within two scores. The Crusaders tried to take advantage.

On the ensuring possession, on a third-and-16 from its own 20, St. Paul’s got a huge play from Smith.

Nearly avoiding a sack at his own 1-yard line, Smith escaped and delivered a beautiful ball to Josh Stinespring who broke free near midfield. Stinespring made the catch and ran to the BL 22 before being stopped, for a 58-yard gain. Four plays later, Smith scrambled again and, again, Stinespring made a play for him, getting open in the end zone for a 22-yard touchdown catch on fourth down. The kick was good and St. Paul’s trailed by just five, 22-17, with 3:22 remaining.

The Boys’ Latin offense was able to run the clock down to seven seconds before the ball was returned to the Crusaders on a punt.