BL completes the 3-peat in MIAA B baseball 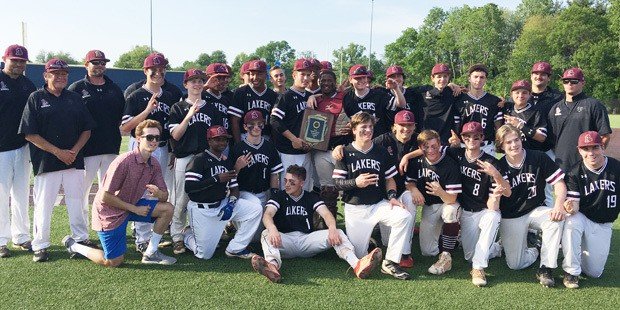 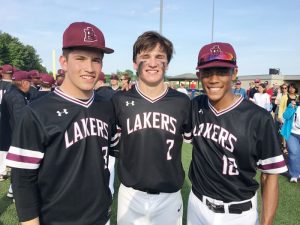 When he arrived at Harford Community College early on Monday afternoon, Boys’ Latin baseball coach Bill Greenwell revealed that he had been awake since 3:00 a.m.

“I couldn’t sleep,” said Greenwell. “I love this and I was so excited thinking about the game that I could not get back to sleep,” said the 73-year old Laker skipper who smiled when he said wants to coach at least another 20 years.

If Greenwell’s Lakers continue to perform as they did Monday, when they defeated Glenelg Country, 6-1, in the MIAA B Conference finals to claim their third consecutive league title, Greenwell may be in for many more sleepless nights.

Senior Cole Jarrett led BL’s 12-hit attack in the championship clinching victory, going for 4-for-4 at the plate and junior Ben Grace threw a complete-game two-hitter, striking out eight batters in the victory.

In addition, senior second baseman Jackson Gazin had a double and a triple and two RBI’s and the Lakers were never headed after scoring all of their runs over the first four Innings.

It took just three batters for Boys’ Latin to plate its first run in the opening inning. Leadoff hitter Matt Luterman drew a walk and moved to second on Jarrett’s first hit of the afternoon. Gazin, whose brother Eric also starts for the Lakers, then stroked a double into right-center, scoring Luterman and moving Jarrett to third.

Grace followed with an RBI on an infield grounder, but Glenelg Country freshman starting pitcher Marcus Arterburn retired the next two Lakers to end the uprising.

In the second, the Lakers tacked on their third run and and again it was Jarrett with a key hit, grabbing the RBI with a two-out single. The lead then grew to 5-0 in the Boys’ Latin third when Travis Smith smacked an RBI double to left and scored when freshman Jack Fishel followed with double to left-center, to knock Arterburn off the mound.

Alex Beglan came on to pitch and struck Eric Gazin to end the inning, but Boys’ Latin got to him for its final run in the fourth inning. Jackson Gazin tripled into the right-center gap, with one down, plating Jarrett who reached with a one out single.

That was more than enough offensive production for Grace who retired the first 11 Dragons he faced and carried a no-hitter into the fifth inning, before GCS finally broke through.

“Sammy’s tough,” said Greenwell. “He throws strikes. He had a good changeup and threw fast balls, really got ahead in the count and dominated today.”

Glenelg Country’s speedy junior shortstop Cole Sterry broke up the no-no with a one-out double to center and sprinted home when senior Spencer Goldrich followed with an RBI single to center.

Goldrich was sacrificed to second to put another runner in scoring position, but after a walk to Kevin Gamble, Grace got a swinging strikeout against Alex Beglan to end the threat.

Grace hit the leadoff batter in the sixth before retiring the next three Dragons in order and got a nifty 4-6-3 double-play turn from his infield after Strerry led-off the seventh with a single. That brought freshman Dyllon Ravenell to the plate and he was no match for Grace who needed just four pitches to finish off the game and the championship with a strike out.

“Sam pitched a great game,” said Jackson Gazin. “The whole season he’s been battling in and out. He got us to this championship. He’s a bulldog.”

Grace, who won four varsity letters this year (soccer, football, basketball and baseball), would allow just the three base hits in his complete game gem. He walked only one and struck out eight Dragons.

“We came in knowing we won two in a row and I just wanted to do this for my teammates, so I just went out there and gave my best performance,” said the humble Grace, who is also a top goal-scorer for his school’s soccer team, an outstanding punter and place-kicker for the football team and three-point sharp-shooter for the basketball team. “I can’t thank my teammates enough for playing their hearts out all game and they had my back with the six runs.”

Glenelg Country left-handed ace Tyler Russo blanked BL over the final 2.2 innings, striking out four batters in the process, despite having working the final four innings in the Dragons’ eight inning victory over Gerstell Academy the day before.

“As you fight through and you have to get from one game to the next game (in the tournament), you’ve got to use every weapon you can possibly use,” said Glenelg Country coach Chris Garber in explaining why he did not hold his ace for the Lakers. “Yesterday, we had to go to the big arm that we know that we’ve got (Russo), who probably could have neutralized their offense, but we had to go to him yesterday just to get out of a tough Gerstell game. We would have loved to have started Russo, but we weren’t sure how long he would have been able to get us.”

According to Jarrett, the Lakers enjoy their time together and the winning takes care of itself.

“Playing with these guys has been the highlight of my Boys’ Latin career,” he said. “I’ve been on this team for four years and had the opportunity to captain this year. I told these guys all season, keep your foot on the gas and they definitely listened to that today.”

“I have to thank these guys. I love them,” said Gazin. “I know when I was struggling this year they were there for me. It’s a bunch of great teammates. Today I was just trying to feed off of that, but it wasn’t me, it was everybody out there.”

Gazin also spoke of his manager.

“He’s a great guy. The thing about Greenwell is he knows his players well and what works for them. If you are not hitting well, he’s not going to get on you. He just keeps it smooth and relaxed. I think that is what has allowed us to succeed for so long.”

As for Garber and the Dragons, they left HCC with their heads held high.

“We’re obviously proud of our accomplishment,” said the Dragon manager. “We played 12 one-run ball games. Nothing came easy to us, but these guys found a way to stay in every single game and give ourselves an opportunity to win and we won more than we lost. All we wanted was an opportunity.”