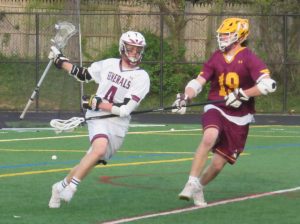 Towson attack Grant Kuehn (4) tries to get around Hereford defender Gino Pisano during the second half of Wednesday’s Baltimore County boys lacrosse contest. The No. 17 Bulls outlasted the host and 14th-ranked Generals in double overtime to remain undefeated in league play.

It has been so long since a Hereford boys lacrosse team lost to a Baltimore County opponent that nobody seems to have a clue as to when it happened last. Even veteran Hereford assistant coach Steve Turnbaugh is unable to recall the 17th-ranked Bulls tasting defeat at the hands of a county foe, and he’s been around the program as long as anybody.
The Parkton school last loss a regular season match in Baltimore County play in 2009. The streak continued Wednesday at No. 14 Towson when Jake Baldwin scored an extra-man goal in the second overtime on a feed from fellow senior midfielder Jack Callis to lift 17th-ranked Hereford to an 8-7 victory.
It was the fourth goal of the game for Baldwin who also notched the tying goal with 40 second remaining in regulation.
And it all happened while wearing a No. 18 jersey on his 18th birthday.
Baldwin said that he knew the Bulls (7-3 overall, 6-0 Baltimore County Division I) were going to score, although he was unsure who would do the honors.
“Coach told me to get to the crease, and I did,” Baldwin said. “Jack had a great carry, and then he saw me. I really just kind of batted it in  — I never really had (control of) it. It’s a great birthday present.”
The longtime rivals were separated by as many as two goals only once, when Towson (6-3, 4-1 Division I) went ahead, 4-2 on a rocket shot early in the third quarter by senior midfielder Leighton Bechdel.
The Generals then had several chances to widen the margin against Hereford senior goalie Nick Balducci, who made key saves to keep Hereford in striking distance.
The Bulls made up the difference and more later in the period with a three-goal burst in 72 seconds on tallies by freshman attackman Shaun Gillespie, Baldwin and junior attackman Jake Furman.
The score see-sawed from there, with senior midfielder Rory Bateman tying it for Towson early in the final stanza before senior midfielder Grafton Griffey put the Bulls back on top, 6-5, with just over seven minutes remaining in regulation.
Towson forged another tie 19 seconds later when senior attackman Grant Kuehn picked up a loose ball and beat Balducci from close range.
Bateman then collected a pass from Bechdel and sent a missile just inside the right post with less than two minutes left in regulation to put Towson back on top, 7-6.
A minute after that, Baldwin tied it for the final time to set up a birthday to remember.
“It was just a crazy team win,” Baldwin said.
Hereford coach Sal Picataggi said that his young teams is starting to come together.
Even when senior close defender Sam Furman was sidelined with an injury and did not return for the second half, his replacement, junior Gavin Walter, “did a great job,” according to Picataggi.
“We have a lot of young guys,” he said. “And we asked them to do a lot today — and they did.”
Balducci said that he was seeing the ball well, especially in the pivotal third quarter.
“I was able to stop them and keep us in the game,” he said, noting that his best game this season was a 15-save performance in an 8-1 setback to Gilman.
Towson coach Shawn Burke lamented those missed opportunities that came back to haunt the Generals.
“That’s a tough one to swallow,” he said. “We left some goals on the field today. I though we could have been up 3-0 or 4-0 early, and we didn’t put them away. I was worried that it would come back to bite us, and it did.”
Should both teams continue to win their final games against county rivals — and they will be favored to do so — they would meet for the county championship in a couple of weeks. 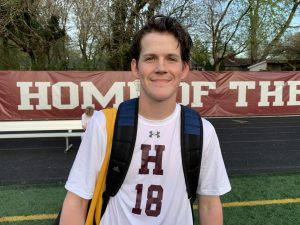 Sweet 18: It was a memorable birthday for Jake Baldwin Wednesday. The senior midfielder capped a 4-goal performance with the game-winner in the second overtime, giving Hereford victory.

Towson is the last team to hand Hereford a regular season loss in Baltimore County play – a 10-7 decision on March 27, 2009. The Bulls have won 35 straight against county foes (including postseason) since losing the 2016 county final to Franklin in overtime.