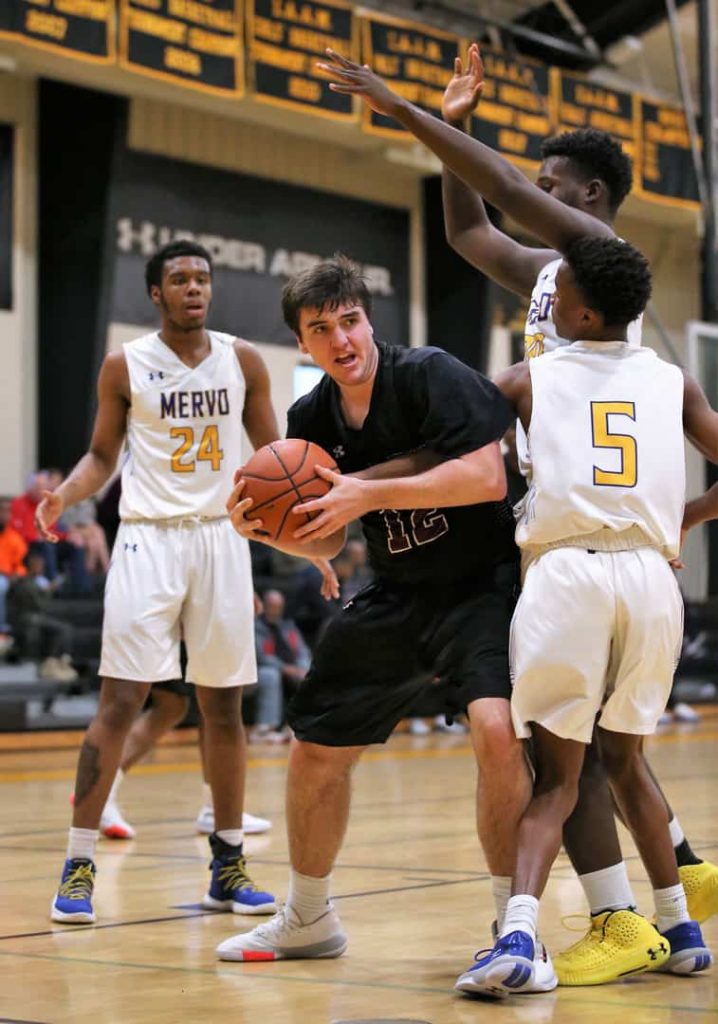 Boys’ Latin’s Will Spencer is surrounded by Mervo’s Carlos Alexander (5), Elijah Rantin and Will Thomas (24) during Saturday’s boys basketball contest at the Baltimore Hoops Festival. The unranked Lakers knocked off a Top 10 team for the second day in a row with a 70-61 decision over No. 8 Mustangs at St. Frances Academy. (photo – Jimmy Fields Sr.)

During pregame warmups for Saturday’s boys basketball contest between Boys’ Latin School and Mervo at the Baltimore Hoops Festival, a spectator observed the Lakers from under the basket.

“How did they beat Mount St. Joseph?” the spectator said, not impressed by Boys’ Latin.

The Lakers may not pass the so-called eye test, but once the ball is tipped, they often check all the boxes. Boys’ Latin knocked off the eighth-ranked Mustangs, 70-61, at St. Frances Academy’s Phelps Gym.

Woodlawn took over in the second half to defeat Patterson, 72-55, in the opening match. Tyray Cooper finished with a game-high 16 points for the Warriors (3-2 overall), and Thompson added 15.

Tied at 25 at halftime, Woodlawn outscored the defending Class 2A state champ Clippers, 27-11, in the third quarter. Freshman Monte Shabazz led Patterson (5-5) with 13 points, and John Thomas had 11.

New Town also used a strong second half to drop St. Maria Goretti, 67-51. Senior guard Martaz Robinson, who will play for Delaware State University next season, led all scorers with 22 points and Stephon Marcano finished with 11.

Robinson and Marcano combined for 12 in a 19-8 third quarter run for the defending Baltimore County champs, turning a 33-32 deficit into a 51-41 advantage. The Titans opened up a 20-point cushion, 65-45, after a basket from Andrew Mills.

Edmondson rebounded from its first loss, but Calvert Hall College didn’t make it easy in a 66-60 decision. Tavon Hartz finished with a game-high 24 points for the Red Storm (8-1), and Tra’Shawn Lewis had 15.

Edmondson, which lost at No. 4 City in a battle of unbeaten programs, built a double-digit margin in the fourth before The Hall pulled to 62-60 on a three-pointer from Antonio Foxwell with 1 minute, 14 seconds left in regulation. Dedrick Harrell and Brian Rice each converted two free throws in the final minute for the Red Storm.

The East Baltimore school, ranked 23rd nationally by MaxPreps, finally pulled away from New Hope in the fourth quarter. Reserve freshman guard Jonathan Lamothe had 10. Hassan Massenburg, a transfer from Poly, led all scorers with 21 points for New Hope (3-12).

After blowing a double-digit advantage, Mount Carmel regrouped into overtime for victory over Milford Mill. Sophomores Toby Nnadozie and Deon Perry each scored 14 points for the Cougars (9-6).

The Old Eastern Avenue school led 56-50 with less than three minutes left, but Jermaine Goodwyn brought the Millers back. The senior lefty scored a game-high 24 points, including a three-pointer with 52 seconds remaining in regulation, tying the game at 57.

The Cougars got two free throws from Perry and a basket from Koralp Turk to start overtime, but a deep 3-pointer from Goodwyn pulled Milford Mill to 65-64 with 19 seconds left. Nnadozie missed the front end of an one-and-one with 8.4 seconds remaining and Goodwyn’s three-point attempt hit off the rim.

Detwan Montague and Sammy Scott had 13 and 11, respectively, for Milford Mill (4-3). Turk, a junior, finished with 20 rebounds.

In a Top 15 match that didn’t disappoint, City remained undefeated with a 73-66 victory over Gilman. Dominic Carrington had 16 points for the Knights (10-0), and junior forward Kevin Obialulu scored 11 of his 15 points in the fourth quarter.

Obialulu’s free throw broke a 64-64 tie with 61 seconds left in regulation. Kevin Kalu hit one of two free throws with 45.6 seconds after grabbing Christian Winborne’s missed runner and was fouled.

Kalu, a 6-foot-9 junior reserve, converted two free throws after being fouled following a defensive board. The Knights made nine of 12 free throws in the final 61 seconds.

St. Frances’ Adrian Baldwin heads to the basket for two of his 18 points. The second-ranked Panthers improved to 16-1 with a victory over New Hope Academy in the final game of the Baltimore Hoops Festival inside Phelps Gym in East Baltimore. (photo – Jimmy Fields Sr.)

City coach Omarr Smith was pleased to see his squad “find a way,” less than 24 hours after a huge victory over No. 3 Edmondson Friday.

“We didn’t play our best basketball at all, but you got to find a way to win,” said Smith, “especially as bad as we played in the first half and to be down only three.”

Trailing 36-33, City responded in the third, claiming a 50-43 lead late, but Gilman closed the session with nine straight, capped by Matthew Cooper’s three-pointer to take a 52-50 advantage into the fourth. The Knights regained the lead and was up 62-56 midway before the Greyhounds made another run.

Gilman (7-6), which also played Friday against St. Frances, pulled even at 64 on Roman Hinds’ 10-footer with 1:25 left in regulation. The Greyhounds missed a chance at lead as Winborne’s runner didn’t fall, and Jordan Foster missed on a three-pointer trailing, 65-64, with 32 seconds to play.

Junior guard Matthew Cooper finished with game-high 18 points for Gilman, and Winborne and Foster each added 13. Hinds, a 6-9 senior center, had 11.

“This is a group I believe in. We had two timeouts left and decided to let them play through it at the end,” said Bartz. “You never know what’s going to happen but for them to walk away knowing that the coaches trust them…we’re all in  with the culture and these guys are willing to buy into. We’re going to use this as a learning experience.”

After a late rally to force overtime, and eventually victory Friday against Mount St. Joseph, the Lake Avenue school controlled pace in the second half against Mervo. Senior guard Kendall Walker added 14.

Boys’ Latin, which reached the MIAA A semifinals last season after a captivating run to the title match the season before, thinks its turning the proverbial corner in time for immersion into league play.

“We had a tough go at it over the holidays, playing some really tough opponents and weren’t really clicking to start the season,” said Lakers coach Cliff Rees. “These two days showed what they’re capable when they look to do it as a team.”

“We went through some growing pains, we lost to six or seven seniors last year, so that’s a pretty big hit,” said Walker. “We have some young guys trying to find their spot, but now, we’re hitting our stride.”

Rees was livid after Alexander buried a three-pointer tying the game before the halftime buzzer, following a turnover. The Lakers held Mervo scoreless for nearly four minutes, claiming a 36-27 advantage.

“We’re not a team who can make mistakes and beat ourselves,” said Rees. “The kids responded and did what we’ve been talking to them about – finding the next pass or open man.”

The Lakers never trailed again. The Roland Park school opened up a 10-point advantage early in the fourth as Riar Schell followed Will Spencer’s steal with a three-pointer.

The Mustangs got to 58-53, sparked by back-to-back trifectas from Demonee Carter. Boys’ Latin was able to handle Mervo’s pressure and executed in half court as Walker and Donadio converted baskets.

Donadio, who poured in 34 points including a NBA-range dagger at the end of regulation Friday, said Lakers couldn’t afford a letdown, especially against a talented Mervo team.

“We said after the game (Friday) reset,” said Donadio, a 6-4 senior. “We played hard and aggressive, especially on defense.”

The Lakers have a non-league contest Monday at Pikesville, looking to reach .500 for the first time since winning their Laker Invitational before the holidays. Boys’ Latin host McDonogh School Friday and play at Glenelg Country School Jan. 13 in MIAA A Black division play.