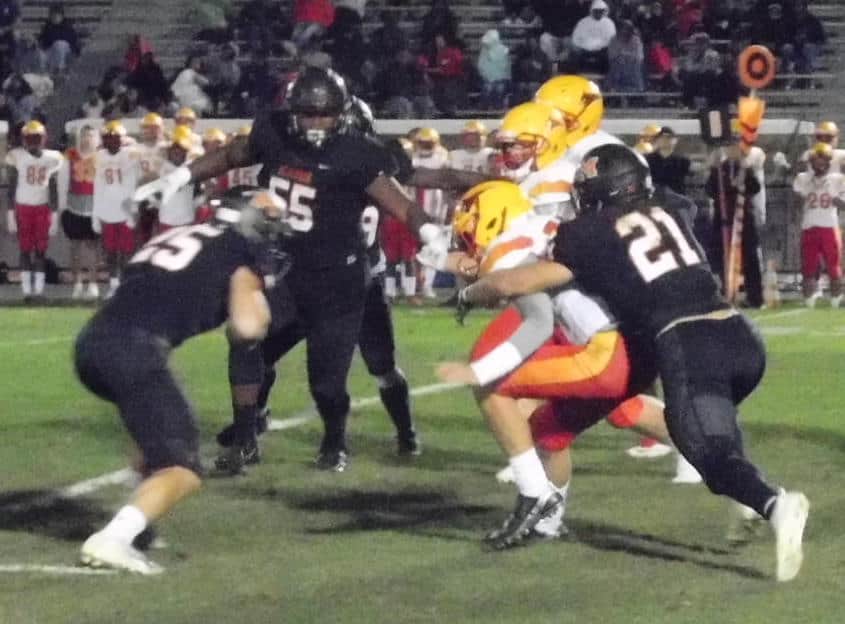 McDonogh School football coach Hakeem Sule said that after a three-win campaign last year, it was time for the Eagles “to take a look in the mirror.”

“We had to figure out what was the best way to move the ball better,” Sule said. “We needed more RPO’s (run-pass option plays), more big plays.”

Once the coaching staff decided that what worked so well in the second half of a 33-8 victory in its annual grudge match against archival Gilman School last November would play well in 2019, there’s been no stopping what has turned into a McDonogh juggernaut boasting a 6-0 overall record this fall and now a 1-0 mark in league play.

On Friday night on a brisk night in Owings Mills, the fifth-ranked Eagles used that formula to perfection in drumming No. 4 Calvert Hall College, 28-8, in an MIAA A Conference contest. 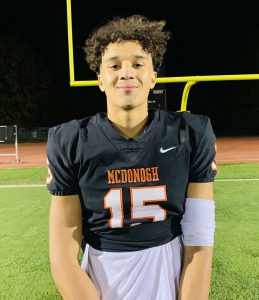 McDonogh quarterback Preston Howard was smooth in running the Eagle offense Friday night in a big MIAA A Conference win over Calvert Hall.

Sophomore quarterback Preston Howard (4-for-7 passing, 98 yards), who opened the floodgates against the Greyhounds last year on a 3-yard plunge to snap a scoreless tie, did the same thing against the Cardinals, only this time it was in the opening period on a scintillating 73-yard gallop.

Howard (98 yards rushing), who started last year as a tight end/defensive end before taking over signal-calling chores for the final two games, faked a handoff to senior running back Giovanni Procaccini, cut inside and then veered down the left sideline to give the Eagles a 7-0 advantage after senior Harrison Beattie’s conversion kick with just over five minutes left in the quarter.

What was most galling for Calvert Hall (4-2, 0-2 MIAA A) was that after Beattie’s first punt attempt was blocked and then recovered at the Eagle 3-yard line by junior defensive back Tre Jordan, senior running back Sean Tucker was stymied on four straight runs, the last of which was blown up by senior linebacker Jackson Bonitz.

“Bonitz has been doing it for us for a long time,” Sule said. “He’s a lacrosse kid with a football player’s heart.”

The visitors would also fail to capitalize on another golden opportunity when senior defensive end Connor Icard pounced on Howard’s fumble at the McDonogh 28-yard line in the third quarter.

Tucker was thrown for a loss on the next play, McDonogh sophomore lineman Kwan Williams then sacked Amir Jenkins before the junior quarterback threw an incomplete pass to end the drive.

That sequence would come back to haunt the Cardinals because Howard would toss a 73-yard strike to junior wideout Jamir Roberts, who bounced off a defensive back just as the ball arrived, before scooting into the end zone for a 14-0 bulge with just under two minutes remaining in the period.

Howard said that he felt all of the momentum swing toward the Eagles after the play.

With freshman Noah Brannock taking over for Jenkins, things took a sudden turn for the worse for the Cardinals when McDonogh sophomore linebacker Niles Riding picked off a pass in the flat and hustled 46 yards to complete the pick-six and give his team a 21-0 lead that bloomed to 28-0 on a 3-yard Procaccini run in the fourth quarter.

Brannock redeemed himself and ensured Calvert Hall would not suffer a shutout when he pinpointed a pass to senior tight end Kaelin Wade in the final seconds for a touchdown before before senior running back Ray Glass blasted in for the conversion points.

Sule said that the emphasis in practice during the week was making sure that the talented Tucker, a Syracuse Univresity commit, wouldn’t burn the Eagles for substantial yardage.

“That was our challenge this week — how to stop No. 24,” the coach said. “We knew that one guy wasn’t going to be able to stop him. And we just had to keep our gap integrity.”

Meanwhile, the Eagle ground game was proficient enough to spring the hard-running Procaccini for 95 yards, even after he lost 24 yards on one play.

The Eagles will travel to Virginia Beach next Saturday to play Catholic High School before returning to A Conference action the following week. The Cardinals will host Royalty Institute next week in an attempt to get back on track after dropping two straight games.

Pictured above: Second-year McDonogh coach Hakeem Sule addresses his troops after the Eagles opened their MIAA A Conference schedule with a 28-8 win over No. 4 Calvert Hall Friday evening.