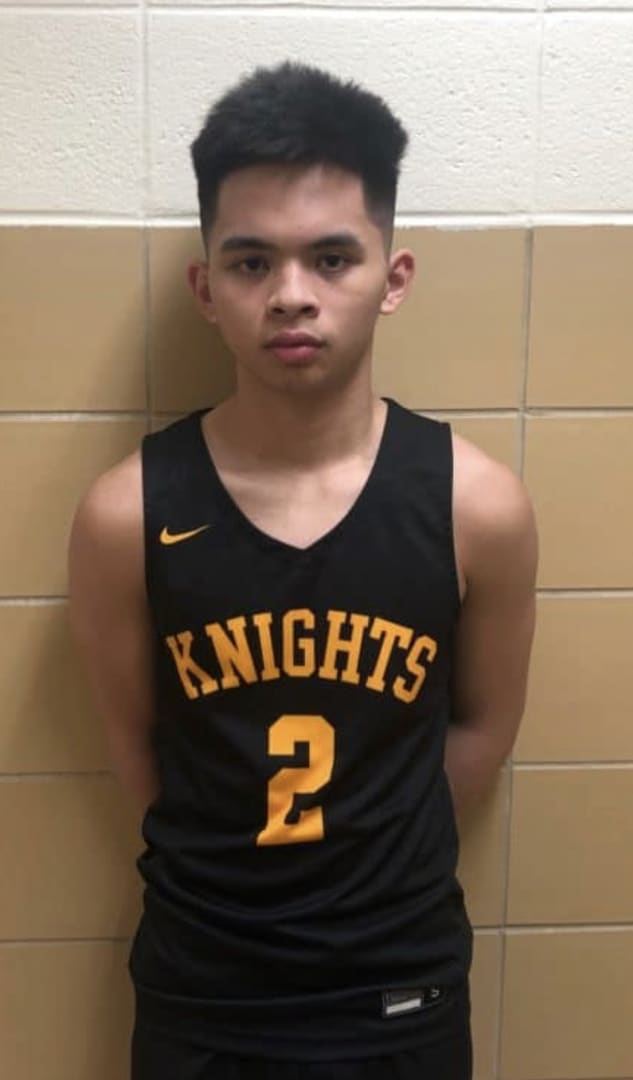 John Godinez was the hero for Parkville boys basketball Saturday evening. The senior guard scored 35 points, including a game-tying 3-pointer at the end of overtime as the No. 20 Knights defeated Montgomery County’s Winston Churchill for a spot in next week’s Class 4A state Final Four at the University of Maryland.

John Godinez wasn’t ready to end his Parkville High boys basketball varsity career Saturday. Thanks to a performance for the ages, Godinzez and the Knights are going to the University of Maryland.

No. 20 Parkville defeated Montgomery County’s Churchill in double overtime, 74-64, in a Class 4A state quarterfinal in Baltimore County. Godinez finished with 35 points for the Knights, who will play Montgomery County’s Springbrook in a 4A state Final Four match Thursday evening at the Xfinity Center.

“Nobody second-guesses John — what he does, the kind of person he is, as a basketball player. I mean, he’s at the highest level.”

Godinez helped the Knights rallied from a seven-point deficit in the overtime before the Putty Hill Avenue school outscored Churchill, 16-6, in the second four-minute session, securing their first trip to College Park since 2008.

It almost didn’t happen. With a chance to win at the end of regulation, Churchill forward Ike Onu Chiedo missed a layup to send the game to overtime, tied at 44.

Parkville’s season was down to about a minute.

“At 1:02 I think we looked up at the clock and said ‘they’re going 1 for 2 on these free throws. Instead of trying to push and get quick 3s from John, why don’t we start fouling and getting two, three seconds taken off the clock?’,” Czerski said.

Churchill struggled to put the game away at the charity stripe and Parkville chipped away at the deficit. Godinez drained a 3-pointer to bring the hosts to 57-55 with 3.2 seconds left in overtime.

Jomo Goings, who led Churchill with 27 points and 11 rebounds, was fouled and went to the line with 2.7 seconds remaining. He missed the first and made the second for a 58-55 lead.

Jordan Strickland inbounded the ball to Jayden Baker, who passed the ball to Godinez. Godinez put up a shot from about 25 feet that hit the backboard, bounced on the front of the rim and fell through the net.

“I’m not even going to lie, I thought I was gonna miss,” said Godinez. ““We were just dogs out there. We were home so we could not lose.”

Godinez, who put the victory away from the free throw line, said denying Goings at the end was crucial.

“That was their (Churchill’s) best player, so if he didn’t get the ball then we would rather let the other players beat us,” Godinez said. “We did that and we came up with the win.”

Khalil Dukes anchored Parkville on the defensive end. Forward Jordan Strickland recorded 12 points and 18 boards for the Knights, who rallied past favorite and No. 8 Mervo in Thursday’s North Region I finale.

“Even early on before the season started, I had a feeling of how we were going to be as far as underdogs. We love being the underdogs,” said Czerski. “We have that resilience, we have that heart. When we were making our team and going through tryouts, we put together guys that would fit with what we were trying to do – never backed down, never quit. That proved tonight.”