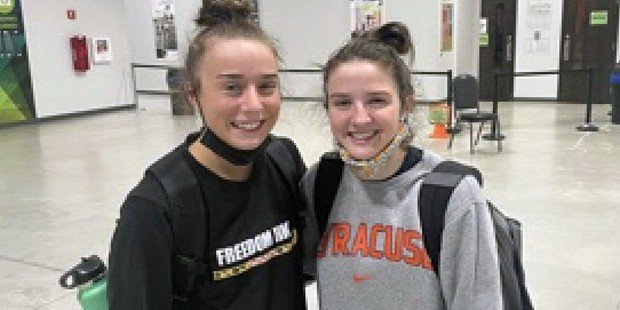 With a special spring field hockey season set to begin in Baltimore County, best friends Kate Proefrock of Dulaney and Emily Ready of Hereford will get one final chance to renew an intense rivalry which ‘never gets in the way’ of friendship

They knew they were bound for opposite sides of one of Maryland’s most intense high school field hockey rivalries with Ready headed for Hereford and Proefrock going to Dulaney, but they were determined not to let that undermine their friendship.

Hereford and Dulaney have played for the Baltimore County championship in 10 of the past 11 years, so the girls had to figure out how to make that friendly but fierce rivalry work for them. 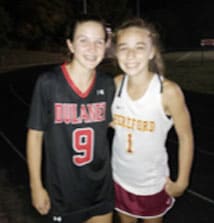 Dulaney’s Kate Proefrock (left) and Hereford’s Emily Ready (photographed as high school freshmen) became friends when they started playing club field hockey in the seventh grade and made sure playing for rival high schools would never divide them. (Photo courtesy of Michael Ready.)

“My freshman year, it took me a little while,” Proefrock said. “We were both more serious about it, like, ‘Oh, this is such a big thing. We’re best friends, but we go to different high schools,’ … but I didn’t think it would ever hurt our friendship, because we’re both goofballs and we’re able to get away from the serious rivalry that gets so hyped up. We’re able to separate that.”

Don’t think Ready or Proefrock take it easy on each other on the field. Both four-year varsity veterans are competitive and headed for Division I field hockey programs in the fall. They especially want to win those Hereford-Dulaney games.

“We always play them in counties,” Ready said, “so whoever wins — they beat us freshman year and we won sophomore and junior year — right after the game, we’ll say, ‘Good game’ or whatever, but we’ll give each other some space, because obviously it’s a hard loss whoever loses. Our games are always really close, but we’re always friends. It never gets in the way.”

Both girls said they have similar personalities. They’re both outgoing and they’re both competitive, so bonding over field hockey made it easy to become — and to stay — friends.

Hereford coach Caitlin Duvall coached both girls at the Green Turtle Club as middle schoolers and she had no doubt that their friendship would survive the rivalry.

“They were such good friends and they were anticipating going to rival high schools. Both Hereford and Dulaney have good reputations and they would kind of banter about it. It was very fun and lighthearted. They’re both very talented players and it was fun watching them develop and grow. Neither of them tried to be the star of the show but just good team players even in middle school,” Duvall said.

Proefrock, who is headed to Syracuse, and Ready, who will play for Rider, still play club field hockey together with Freedom Field Hockey. Both are forwards, so they don’t come face-to-face that often when Dulaney and Hereford meet, but it does happen.

Proefrock said they can’t trash talk or try to intimidate each other. They just dissolve into laughter.

“It always happens that we go head-to-head,” Proefrock said, “so If I’m playing defense or she’s playing defense on me, we’re always laughing or saying something and that’s pretty fun. Just like, ‘I’m going to get you,’ but then we’ll just start laughing.”

Ready said, “Sometimes, we’ll laugh because we’re so used to playing with each other that when we go against each other, I know how she plays and she knows how I play. It’s kind of funny, but we’re both very competitive.”

That was especially true of playing each other in three Baltimore County championship showdowns. All were decided by a single goal and only one in regulation. In 2017, Dulaney won 4-3 in overtime. In 2018, Hereford won, 1-0, and in 2019, the Bulls won in a 3-2 shootout.

Because of COVID-19, there will be no county championship for their senior year, but with a limited fall season set to begin next week, Proefrock and Ready will have one more chance to face each other when they meet in the regular-season game at Hereford on March 17.

It will be their only meeting this season after playing each other three times in each of the past three years. Proefrock thinks the game will have a championship feel to it anyway.

“I’m definitely looking forward to it a lot more than the other games,” Proefrock said, “just because they’re our rival and I look forward to playing them every year. I think it will feel like there’s a lot more riding on it than on a normal Dulaney-Hereford game just because we only get to play them once this year and so it’ll be really hyped up.”

For Ready, thinking about facing her friend for the final time is bittersweet.

“We won’t play each other in college,” Ready said, “so it’ll probably be sad more than anything because I’ve been playing with and against her for so long. But we’ll still be close. Since we go to different schools, we’re used to not seeing each other constantly. It doesn’t matter how long we don’t see each other, everything picks up when we hang out again.”

Dulaney coach Brittany Jackson knows that playing with and against your best friend can cement a lasting friendship. She and Shelli Whittington played together at Bohemia Manor High School in Cecil County, but their club teams played against each other.

“You had to remind yourself that, at the end of the day, is it really worth getting upset over and I think that really taught us to be more supportive of each other and care for each other. Sometimes you come out on top and sometimes you don’t and your friendship is something that, I think, makes the competitiveness a little more fun. It really motivated us. We wanted to play well in front of each other,” said Jackson, who is still friends with Whittington, now the JV coach at Bo Manor.

Proefrock and Ready believe playing against each other has strengthened a lasting friendship too.

It probably helps that they can split bragging rights. While Ready and Hereford won two of three county championships, Proefrock and Dulaney have won five of six regular-season games and six of the nine games they’ve played so far.

Either way, it will always be fun to reminisce.

“It’s something that we got to experience together,” Proefrock said, “and we’ll always go back on it. Even when we thought it was the end of the world when one of us lost and the other won, it’s something we’ll look back on and laugh about.”

Pictured above: As club teammates, Hereford’s Emily Ready (left) and Dulaney’s Kate Proefrock play for Freedom Field Hockey. When they meet on the field as high school rivals, they can’t really get into trash talking, admitting that it just makes them laugh. (Photo courtesy of Michael Ready.)