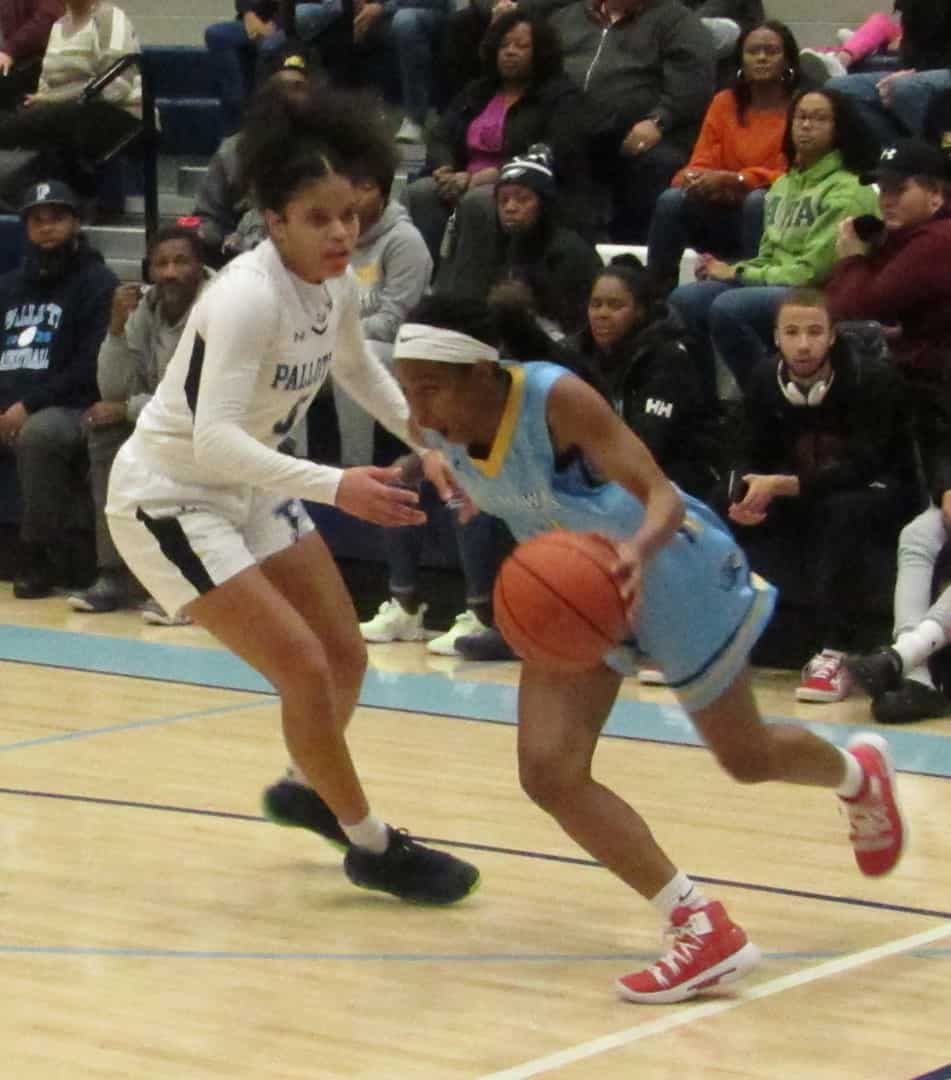 River Hill guard Kennedy Clark tries to get past Pallotti’s Tahlia Brown-Stangherlin during the first half of Monday’s non-league girls basketball contest. The second-ranked Panthers pulled away from the No. 13 Hawks for a 47-30 decision on Sister Karen Court in Laurel.

While it may not have exactly been planned that way, No. 2 St. Vincent Pallotti High was able to show just how deep its roster is in a 47-30 non-league girls basketball triumph over 13th-ranked River Hill on Monday night in Laurel.

The Panthers (11-3 overall) went all the way to the end of the bench to subdue the Hawks after Pallotti coach Joe Mathews yanked his starters early in the second half and watched his team respond to the challenge by turning a six-point advantage into a 17-point victory.

All 11 players on the squad scored, with junior guard Lauryn Russell leading the way with a modest eight points while junior guard Vashae Rideout added seven points for Pallotti.

The Hawks, who won the Class 2A state championship last year, were more than competitive early, closing the second quarter on a 6-0 run on a couple of buckets by sophomore guard Anniya Smith, who had a game-high 15 points, and two free throws by senior guard Kennedy Clark to head into halftime only down 22-18.

After a layup by by senior guard Nhaikyia Smith stretched the Panthers’ lead to six points, a couple of turnovers prompted Mathews to make wholesale changes to his lineup.

“We came out and had a lot of turnovers,” she added. “Our underclassmen really stepped up.”

Although River Hill briefly managed to get within 29-25 on a finish by senior forward Saniha Jackson assisted by Anniya Smith, Pallotti’s subs sunk the Howard County school with a withering 18-5 closing run ignited by a runner by Makayla Waleed.

The junior guard also bookended the sequence in the final minute of the fourth quarter on a drive.

In between, junior guard/forward Laila Whitaker, Nhaikyia Smith, junior guard Vashae Rideout, Lauryn Russell and senior guard Jania Hall all contributed points while the defense clamped down on the Hawks.

“Our defense drives our offense,” senior guard/forward Tahlia Brown-Stangherlin said. “We were coming off a loss (to Newark, Ohio in a holiday tournament), so we didn’t want to come back home and lose.”

River Hill coach Teresa Waters, whose team fell to 7-3, said that she and her troops knew they had a tough task in taking on the Panthers of the highly competitive Interscholastic Athletic Association of Maryland A Conference in the first game back after the holidays.

“We use games like this as a measuring stick,” she said. “But we only go six or seven (players) deep, and he (Mathews) had much more depth. I think we ran out of steam a little bit and started to make some ill-advised decisions. Our bigs got in foul trouble, but we still had our chances. We just didn’t finish.”