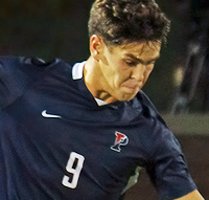 Former Archbishop Curley soccer star Ben Stitz, now a senior midfielder at the University of Pennsylvania, was named Ivy League Player of the Week for his performance in two games last week.

Stitz had a career-best five points on three assists and a goal in the Quakers 5-1 win over Mount St. Mary’s. He also had four shots on goal in a draw against Loyola Maryland.

Stitz has now total nine points (2 goals, 5 assists) in five games this season, tying him for the team lead.