Bel Air volleyball is headed back to UMD 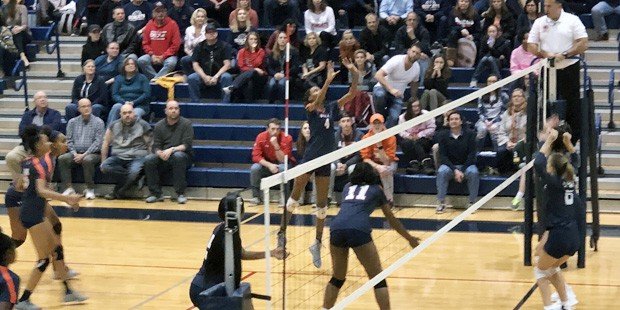 No. 7 Bobcats defeat No. 19 Poly in three sets to earn their second straight trip to the 3A state semifinals

After taking a 1-0 lead, Bel Air survived a fiercely contested second set in its 3A state volleyball quarterfinal match with Poly, Friday evening, vaulting the Bobcats to a three game sweep of the Engineers and a second consecutive trip to the University of Maryland’s Ritchie Coliseum. 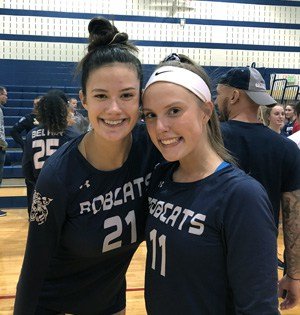 Seniors McKenna Reiswig (left) and Olivia Simon led the way for Bel Air in its 3A state quarterfinal win over Poly.

Poly (15-2) rebounded from a seven point loss in the first set to push out to a 5-1 lead in the second set as Asia Murray delivered three consecutive service winners. Bel Air fought back to tie the game at 7-7 and it went back-and-forth from there, with Poly twice taking a two point lead.

A critical moment occurred, however, with Poly holding a 17-16 lead and Bel Air serving. The Engineers were whistled for a rotation violation, which evened the match and caused several minutes of discussion. Poly coach Kendall Peace-Able felt like it disrupted her squad.

“I think some of the things that took place with the table and the officiating in the second set kind of ruined our momentum, but the fact of the matter is you have to play your way through it” said Peace-Able. “It’s disappointing.”

Despite that moment, the set remained razor close with six more ties and five lead changes before Bel Air seized a 2-0 lead with a 25-23 win, locked down by a pair of service winners, including an ace on game point, by Reagan (8 kills, 2 aces, 4 digs).

The outcome of the second game sent the teams in different directions in the final set, as Bel Air jumped out to a 4-0 lead which eventually grew to 11-4.

As she did in the first set, Simon got Bel Air in a groove with four straight service winners. Later on, with the Bobcats up 15-5, Megan Cassaday stepped to the service line and delivered nine consecutive winners including four aces to all but seal the deal. Poly gained one final side out, but the Bobcats answered that on the next point, to finish off their 25-7 win.

Simon, who had 25 assists and five aces, explained the importance of getting a quick start.

Simon agreed that the second set was key.

“It was so crucial we won that second game. That’s what kept our energy up. It was a battle, it was back and forth. We had a couple of service errors, but once we got in a groove, we were able to stick with it.”

“Every coach knows that momentum is huge in this sport, so to get that 2-0 lead was huge for us,” said Coach Simon.

The coach also praised his seniors for the leading the way against Poly.

“McKenna Reiswig was really crushing it from the right side. Jay Harden, a great libero we’ve got, and Olivia Simon, my daughter, she was running the offense. All of our seniors have been great this year. We love them.”

Reiswig, a 6-foot-3, left-handed right-side hitter, kept the Engineers off guard all evening, with her 11 kills and three blocks. When she wasn’t winding up and driving home a big kill, she was serving up change-ups with some skillfully played dinks and taps.

“Coach knew we had an open hole in the court, open spots where they weren’t covering,” said Reiswig. “He told me to take advantage of that.”

“We know they have some really good hitters,” said David Simon. “I think we just kept them out of their system. Our services were tough and I don’t think they could feed their players as much as they wanted.”

Murray, Janeal Homer and Courtney Roundtree all came up big for Poly, keeping the Engineers competitive, especially in the first two games.

As for Bel Air, the attention now turns to the state semifinals where it will face Magruder on Thurs, Nov. 14th.

“Going back to UMD is a hard thing to do, but we did it,” said Reiswig. “We worked hard all season and we know we have to work even harder.”

“When we start the year, I always tell them that’s what we are aiming for, to get back to Maryland, and we’re fortunate to get to do it two years in row,” said David Simon. “Every team is really good now, so we’re going to have to play our best, even better than tonight.”