Going out in style

In their coach’s final game, the Sailors defeated Notre Dame Prep in five sets for their first crown since 2011. Roland Park School extended its dominance in the B with a four-set victory over Mount Carmel while Annapolis Area Christian School swept Concordia Prep (25-11, 25-19, 25-18) in the C finale.

The Odenton school posted fast starts in the opening and third set to win its first league championship since 2007. The Eagles now own the most C titles (three).

“This is sweet because it’s been awhile,” said Annapolis Area Christian coach Marianne Graham, whose guided the program to all three titles in her 15-year tenure.

It was redemption for the Eagles, who lost to St. Timothy’s in last year’s championship match. Annapolis Area Christian returned all but one starter from the squad that was swept in the finale at Roland Park in 2014.

“We wanted to come back so bad and we just fought,” said Eagle outside hitter Mia Hardesty. “We were the best we could be out there today.”

The Eagles carried the momentum into the third and final set, building a 13-4 advantage after an ace from Thompson. Hardesty’s kill made it 19-8 as Annapolis Area Christian didn’t lose a set in league play. 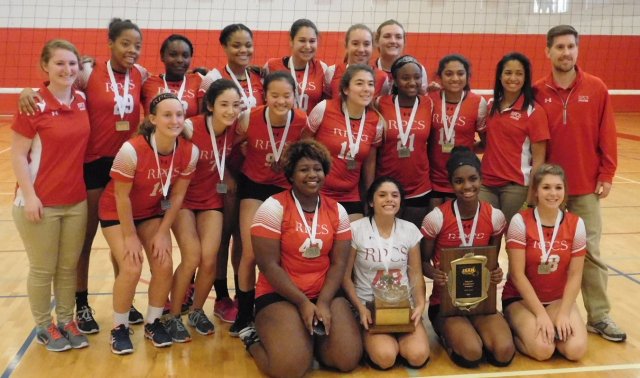 Bailey Andrews arrived at Roland Park Country four years ago, part of a talented freshman class that’s propelled the basketball squad among the area’s elite. But Andrews has found peace and success on the volleyball court.

In an injury-riddled season, Roland Park’s championship grit came to the fore in its penultimate match Saturday.

“At end of the season, you always want to peak but you also want to be healthy,” said Reds coach Shawn Slater, who had two starters out Saturday. “It’s just a testament to this team, once one girl falls, the other one steps up and take her place.”

“We were a little nervous because we had some injured players, but coach told us not sell ourselves short and we were here for a reason,” said Andrews.

Andrews is the reason the league championship glass bowl will reside inside school’s athletic center for another year. The 6-foot-1 hitter accounted for her team’s final three points (all kills), including a title-clinching blast that went off the hands of a Cougar blocker and eluded two more Cougars on the backline.

“She’s our go-to,” said Slater. “When we need her to step up, everybody knows we can rely on her.”

Roland Park needed every contribution to subdue Mount Carmel (15-5), which rebounded from dropping the first two sets to go wire-to-wire to capture the third frame. The Cougars overcame an early 7-3 hole in the fourth, claiming a 12-10 lead after Abby Klingenstein’s kill.

The Old Eastern Avenue school led 16-15, but three errors helped Roland Park in a four-point run to regain the lead for good. Freshman Morgan Puller finished with 22 kills for Mount Carmel, which fell short in its pursuit of its first IAAM volleyball title since 2000 (B Conference).

“We lost seven seniors last year and a lot of teams maybe underestimated the talent we have left,” said Cougars coach Niki Gartrell. “Being down 0-2 to an experienced like Roland Park is hard to overcome, but we fought in the third game. If some things landed our way in the fourth set, who knows.”

After her sophomore season, Bailey decided to stop playing basketball and focus on volleyball. She started playing volleyball as a freshman to help faciliate her basketball skills.

“I realized I really loved the sport,” said Bailey, who hasn’t decided on college. “As a senior, it’s always exciting to win a championship but it’s incredible to win it three years in a row.” 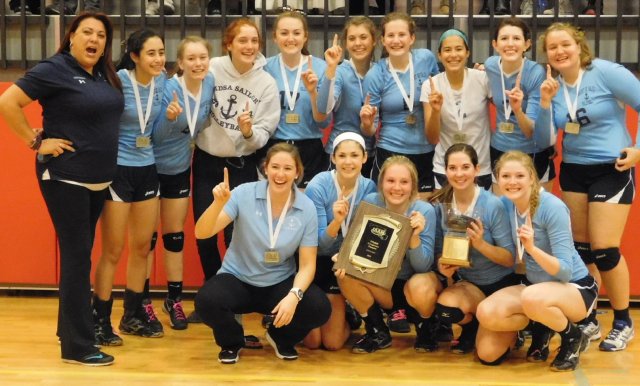 As Mount de Sales players and fans celebrated the IAAM A volleyball championship late Saturday afternoon on the court at Roland Park Country School, Monica Owensby received congratulations and well-wishes from several parents. As the crowd dispersed, Owensby saw daughter Chelsea, who drove down from Bridgewater College in Virginia, standing near the net.

Chelsea, a former Sailor standout, ran over and two shared an emotional embrace. It was a fitting end for Monica Owensby, who won her final match as Mount de Sales coach.

On the verge of a crushing disappointment, the Catonsville school rallied from an early deficit in the decisive fifth set to win its first title since going back-to-back-to-back in arguably the area’s toughest league. The Sailors nearly blew a 2-0 set advantage.

“The fight these girls have, it’s been like this all season long,” said Monica Owensby. “Every single match we played have been close and it’s made us a better team. We’ve been in this situation before and knew how to get out of it.”

“It was getting hard on us in the third, fourth and fifth set, but in the end, we remembered we had to fight, we had nothing to lose,” said Sailors senior middle hitter Caroline Kelly. “We were the underdogs.”

Mount de Sales’ hopes were fading rapidly as Notre Dame Prep (14-2), which rallied from 0-2 in last year’s finals, stormed through the third set and never trailed in the fourth set. The Blazers opened the fifth with three straight points including an ace from Leah Rock and Marisa DeLuca’s kill.

The Sailors, who Monica Owensby said lost their edge “expending so much energy” winning the first two sets, found a second wind. Mount de Sales got a 6-5 advantage, its first since early in the second set, courtesy of a lift violation against Notre Dame Prep.

Emily Smith got Mount de Sales even at 8 with a kill, then got the lead after a Blazer error. The Sailors won five of the next six points, putting the championship within their grasp.

Notre Dame Prep got within 14-11, but Celeste Goyena’s bump shot landed in the corner, clinching the title for the Sailors. Mount de Sales, which last defeated the Blazers in 2011, trailed 15-12 in the opening set before a 7-1 run propelled it to victory.

The Sailors led wire-to-wire in the second set, leading by as many nine points. Popp’s kill clinched the set and putting Notre Dame Prep’s reign in jeopardy.

The Blazers’ championship mettle came fore, but the Towson school wasn’t able to complete another compelling rally. No team has repeated as A champions since Mount de Sales’ three-peat.

“We weren’t going to let win in three and they weren’t going to make it easy for us,” said Notre Dame Prep coach Jim Ipshording, whose team won in five sets over Mount de Sales during the regular season. “I thought we had all the momentum in the world going into the fifth set. I think we let everything get to us and stopped playing hard.”

Owensby, who’s moving to Arizona with her family, won three IAAM titles in six seasons as coach at the Academy Road school. It was also a perfect ending for seniors Smith, Goyena and Karli Steranka.

“We’re so thankful that she went out with a bang and we gave this to her as a present,” said Smith.

“The first day of practice I told them and they said ‘well, we’re going to win it for you,’ and they did it,” said Owensby. “I hope they won it for themselves because it’s the greatest feeling in the world.”