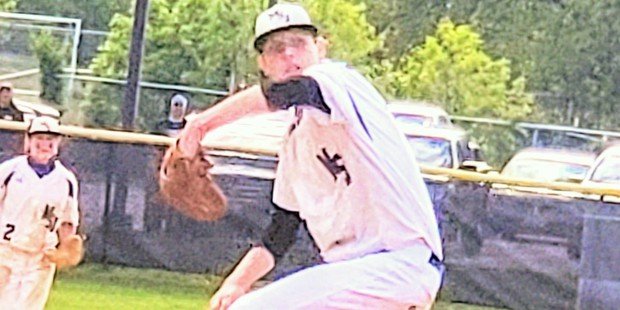 No. 1 Spalding, No. 2 Gilman and No. 5 John Carroll also prevail in the winner’s bracket; Updated bracket here

Thanks to a combined pitching effort from brothers Jackson and Patrick Bauer, and some clutch offense, 3rd-seeded Mount Saint Joseph edged visiting and 6th-seeded Archbishop Curley, 4-3, on Friday afternoon in the quarterfinal round of the MIAA A Conference double-elimination playoffs.

Joey Willis (left) drove in what proved to be the winning run when he singled home Travis Leatherwood, who doubled to start the bottom of the sixth, and scored the winning run.

The third-seeded Gaels broke a 3-3 tie in the bottom of the sixth, when designated-cleanup hitter Joey Willis singled home Travis Leatherwood with what proved to be the winning run. Leatherwood lead off the sixth inning with a booming double to deep right-center, off of Curley ace Jake Michel, and he came around to score when Willis lined a clean single to center on a 1-2 pitch. Leatherwood paced the Gaels at the plate with a double, single, RBI and a run scored.

“When I got on second, I was expecting a bunt, but we know that Joey (Willis) can hit, so Coach Kraska let him swing away,” said the slugging first baseman.

“We knew that Michel is quite the pitcher, but we were hitting his fastball today. We split two walk-off games with them this season, and Ryan Edmonds pitched both times against us. This was the first time we saw Michel, and we adjusted when he threw his curve.”

Willis said, “I knew I had to focus to get the job done. I was seeing the ball really well coming out of his hand on that last at bat. I had a 1-2 count, and I thought he might throw a curve-ball away, but he threw a fast-ball right down the middle.”

The Gaels gave their starter, Jackson Bauer a 3-0 lead with one run in the first, and two more in the third. Spark-plug Ethan Grieb figured in two scores.

The speedy lead-off hitter singled to start the home half of the first inning, and he promptly stole second and third. Josh Lantz drew a walk, and Grieb scored on a 6-3 double play when Leatherwood hit a hard grounder to Curley shortstop Ryan Torres who touched second, and fired to first, while Grieb scored.

The Mount made it 3-0 in the third on a bunt single by Grieb, a double from Lantz, and a Leatherwood single.

Curley broke through with a run in the fourth, and they added two more in the fifth, when they drove Jackson Bauer from the mound.

Cam Munk had an RBI single in the fourth, and Zach Gaeta and Matt Sappington each drove in runs with back to back singles to tie the game.

Edmonds and Tristen “Young Red” Schoendinst both singled to start the frame, and both scored.

Schoendinst, Munk and Torres all had two hits on the day for the Friars.

All three Curley runs were charged to lefty Jackson Bauer who went 4.1 innings, before being relieved by his brother, righty Patrick Bauer, who held Curley scoreless the rest of the way to get win.

Jackson said he tried to work away all day.

“They are a very good hitting team they are fundamentally a great team,” he said.

His brother Patrick said that coming in relief forced him to focus on mechanics.

“They really got their bats on the ball, but we were also making hard contact off of the great arm of Michel,” said Patrick Bauer.

Kraska said he was proud of his team.

“We had great play today from Ethan (Grieb) and Mike Sweeney.”

Grieb made a great catch on a fly-ball off the bat of Munk in the top of the fifth when the Friars had runners in scoring position, and Sweeney picked a runner off first in the sixth, to thwart a potential Curley rally.

“Curley is a tough team to beat. Michael is a great pitcher, but we did a good job today of making adjustments against him,” added Kraska.

The Gaels now advance in the winner’s bracket and will play at 2nd-seeded Gilman, an 8-2 winner over 7th-seeded Loyola, on Monday. Curley falls into the elimination bracket and will also play again on Monday when they host the winner of Saturday’s game between Loyola and 8th-seeded St. Mary’s.

Pictured above: St. Joe’s Patrick Bauer got the win over Curley with 2.2 scoreless innings in relief of his brother Jackson, who went 4.1 innings.

Top-seed Archbishop Spalding scored three runs in the bottom of the first inning and three more in the third to take control of their playoff opener against No. 9 McDonogh, Friday at Spalding, as the Cavaliers prevailed, 9-0.

The Cavaliers made the most of eight base hits, collected from eight different players, as they stroked four doubles and a triple in the victory.

Caleb Estes, Brandon Parkes, Eddie Sargent and Ben Wieman had the Cavaliers’ two-baggers and Tyler Smith hit the triple. Brandon Hannon and Cody Sharman each drove in two runs in the win.

Sargent made the start on the mound, throwing five innings of shutout ball, allowing just two hits and striking out 10. Jack Judge worked the final two innings, without allowing a hit and he struck out three Eagles.

Sam Kinney and Dylan Liedy had the only hits for McDonogh, which will play at 4th-seeded Calvert Hall, which fell to 5th-seeded John Carroll, 6-4, on Monday in an elimination game.

Second-seeded Gilman scored five runs in the bottom of the first inning and 7th-seeded Loyola never recovered as the Greyhounds cruised to an 8-2 MIAA A Conference quarterfinal round playoff victory, Friday.

Danny Leikus was 2-for-3 with a run scored and two RBI to pace offense. Ryan Martinez, Trevor Weiner and Adam Hicks all had two hits, with doubles coming off the bat of Hicks, Martinez and Colin McPherson. Martinez and Hicks each scored a pair of runs.

Ace Peter Heubeck earned the win with seven strikeouts over 5.1 innings of work, allowing two runs on two hits, with five walks. Cooper Sideli finished up the game for the Greyhounds with 1.2 innings of relief.

Gilman will host 3rd-seeded Mount St. Joseph on Monday in the winner’s bracket, while Loyola will host 8th-seed St. Mary’s on Saturday in the elimination bracket.

After blowing a big lead in the seventh inning to Calvert Hall, earlier this week, 5th-seeded John Carroll returned to The Hall on Friday to play the 4th-seeded Cardinals in the quarterfinal round the MIAA A Conference baseball playoffs. The Patriots again grabbed an earlier lead and this time they held on for a 6-4 victory to advance in the winner’s bracket of this double-elimination tournament.

Matt Archibald hit a two-run home run for JC and Frank Adamski went 2-for-3 with a double and three RBI. In addition, Griffin Shirk had two hits and scored a run.

Adamski was also the winning pitcher, going the first four innings and allowing three runs (two earned). Will Wieman pitched the final three innings, allowing just one hit and one run to get the save.

Lamar King went 2-for-3 with a home run and three RBI for Calvert Hall.

John Carroll will now travel to top-seeded Archbishop Spalding on Monday, while Calvert Hall will host 9th-seeded McDonogh on Monday in the elimination bracket.