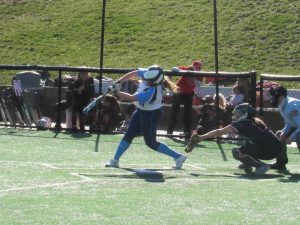 Mount de Sales’ Sophia Ameur follows through on a double during Wednesday’s IAAM A Conference softball match with Archbishop Spalding. The Sailors rallied for a wild 17-16 victory in Catonsville.

You would think that 16 runs would be enough to prevail in an IAAM A Conference softball game.

You would be wrong.

Catcher Allison Cluster’s second double of the game — and ninth by her team — capped a three-run rally in the seventh inning to lead No. 16 Mount de Sales to an improbable 17-16 victory over fifth-ranked Archbishop Spalding on Wednesday afternoon in Catonsville in an IAAM A Conference contest.

“That’s one for the ages in the IAAM,” Mount de Sales coach Ken Magersupp said. “Especially when it’s between these tow teams.”

The Sailors (5-3, 2-0 A Conference) were left for dead after the Cavs built what looked like an insurmountable 11-2 lead in the third inning and still were in control, 11-3, an inning later.

It all came tumbling down, though, in the fifth frame when Mount de Sales sent 14 batters to the plate and scored 11 runs to take a 14-12 advantage that lasted only until Spalding (3-1, 1-1) answered with a four-run sixth to jump back on top, 16-14.

After being held in check in the bottom half of the inning, the Sailors exploded in the seventh when left fielder Anna Shipke drew a walk and went to second on Laurna Heathcott’s single.

Freshman Cheyenne Beayon’s double drove in Shipke before Olivia Davidson, who clouted the game’s only homer in the fifth, was hit by a pitch to load the bases for Cluster’s walk-off.

The strange thing was how well Spalding starter Makenzie Maenner was doing in the first four innings before getting rocked in the fifth.

She gave up two runs on a Heathcott single, a throwing error and Beayon’s double in the first and was touched for another RBI double by right fielder Sophia Ameur in the fourth.

But with such a big lead, things looked promising for the right-hander until the fifth when she gave up three doubles, Davidson’s dinger, a walk and a single before being relieved by Jordan Moore in the fifth.

Although neither team pitched well, winds that gusted up to 30 miles per hour didn’t help the hurlers or fielders.

“It was windy,” Magersupp said. “And it was the first game when the girls were really on the big stage.”

He said that taking a different approach at the plate was also a key for the Sailors.

“We were more patient and waited for a good pitch to hit,” he said.

Beayon, who also recored the win in relief of Lindsey Tolle, went 4-for-5 with three doubles and four RBIs while Davidson went 3-for-4 and knocked in three.

Cluster went 3-for-4 as well with five RBIs and Heathcott went 4-for-5 and drove in three.

“When you play them (Spalding) you know how dangerous they are,” he said. “They are a quality club, top to bottom. Their two top hitters, Jayla Neal and Jordan Johnson, are impossible to get out.”