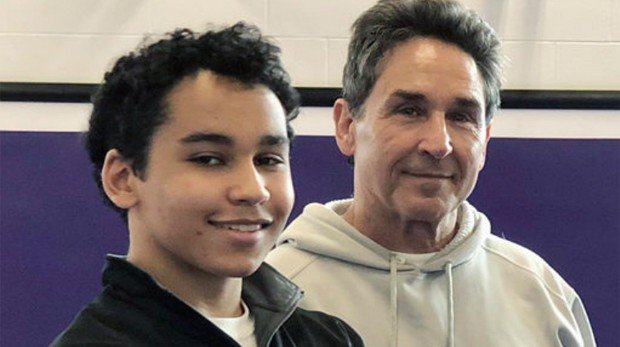 Mount St. Joseph coach Harry Barnabae graduated from his alma mater in the late 1970s, when winning conference and National Prep titles was all but guaranteed for the Gaels.

More than 40 years later, Barnabae’s son, Chris, has modeled him both in leadership and wrestling efficiency, being the elder’s virtual protege, not only embracing but relishing in his father’s rich legacy in a matter of fact manner.

“It’s not about separating us as coach and wrestler, father and son as much as fusing the two together,” said Chris Barnabae, a 126-pound senior. “He’s my coach, and he’s also my Dad, always looking out for me and I’m always striving to do my best, not just in practice, but outside of it as well. I really don’t see it as that difficult of a challenge.”

A defending private schools state champion and three-time state finalist, Chris Barnabae’s goal is to win a National Preps Tournament crown (Feb. 21-22) after having placed second once and third twice at an event to be held at Lehigh University in Bethlehem, Pennsylvania, the school he will attend after graduating.

“Chris emulates [a strong] philosophy. He is one of the most competitive wrestlers I have ever coached. You know that he will give a 110 percent each and every match, regardless of the opponent. While expectations may be high, as they are for the entire team, he always rises to the occasion,” said ninth-year coach Harry Barnabae, whose Gaels are after their fourth straight Maryland Independent Schools State Title.

“Chris is internally driven. It is this attribute that will make him successful in any of his endeavors. I can’t be more proud of his effort both on and off the mat. It has been an enjoyable four-year run, especially when you consider our entire MSJ senior class. I only ask that they go out and represent the school as a ‘Champion’ both on and off the mat.”

Chris Barnabae earned his fourth consecutive title along with Outstanding Wrestler honors at the 24-team War On The Shore Tournament at Stephen Decatur High in Berlin, Maryland, on Jan. 17-18, scoring a pair of first-period falls and a 9-0 semifinal decision before winning his crown by forfeit over Chris Lee of Virginia’s Brooke Point High.

Barnabae was among 10 top six place-winners for Gaels (215 points), who outlasted the host and runner-up Seahawks (190.5) for their fourth straight crown in the tournament.

“I’d say this feels pretty good, not just thinking about myself, but, also, the team,”said Chris Barnabae, whose previous WOS titles at 106, 113 and 120 pounds. “In a couple of weeks, we’ll be wrestling McDonogh, and we’re really looking forward to putting the beat-down on them. I’m always looking to help out my team and making sure we’re getting better.”

Barnabae (26-3, 20 pins) was joined on the victory podium by 132-pound senior Nathan Porter, who repeated as War On The Shore champion with an 8-2 decision over the Seahawks’ previously unbeaten third place Class 4A-3A state finisher Nico D’Amico (21-1).

A University of Maryland-bound prospect who reached the finals on a first-period pin, a 2-0 quarterfinal decision and semifinal victory by injury default, Porter has placed second once and third, twice, at private school states.

“Seeing my teammate, Chris, win, right before you, gets me pumped up,” said Porter. “I couldn’t wait to go out there and win and to make it two in a row.”

Porter’s triumph at the WOS was a rebound from a runner-up finish at the Dec. 27-28 Mount Mat Madness Invitational to former state champion Lorenzo Lopez of Landon High in Bethesda, Maryland, a wrestler he had beaten earlier in the season.

“After losing that match to Lopez, that definitely gave me more motivation. I couldn’t wait to get back into the room and to work that much harder,” said Porter. “That correlated into this past weekend and winning War On The Shore. I definitely wanna win states, not visualizing necessarily who it is that I’m beating, but just winning.”

“I believe the team as a whole, embraces the 45-year Tradition of the Mount Saint Joseph wrestling program. In doing so, they realize that they are etching their own place in the history of the school. This is their time,” said Harry Barnabae.

“I will certainly miss Chris, it will be an adjustment once he leaves for Lehigh, however, his [younger] brother, Nicolas, will soon be following suit and the journey begins again. All I can say is for parents to savor the good times, forget the bad, and enjoy the ride. Those four high school years are just a blur. It’s difficult to place in words.”

Coached by Todd Martinek, a former state champion from Bel Air High in Harford County, Reho is a defending Class 4A-3A state champ, and Clapsaddle was a state runner-up.

Dunbar of Baltimore senior Nyck Simpson (182) continue to make up for the time he lost over the course of his freshman and sophomore years of high school, the latter of which he missed with a broken ankle.

Simpson decked Bourne at 3 minutes, 41 seconds of their title bout, pacing the Poets to seventh place — two spots ahead of state power Damascus of Montgomery County.

“Basically this only my second year wrestling in high school due to injuries. My sophomore year, playing middle linebacker in football, my left ankle completely snapped, the bones sticking out of the skin. It took me about six months to rehab it,” said Simpson, a product of the Woodlawn Wolfpack junior league program who went 10-0 at The Westminster Duals and has won all but one of this year’s matches by major decision or better.

“I’m not head-hunting or anything as much as going out there with the mentality that I just don’t believe that anybody should be able to last with me on the mat for a full three periods. So it’s all gas, I don’t have any breaks, and I’m just going out there to do whatever it is that I can do to the other guy.”

“You need something like this to get your guys minds back focused on the grind of the postseason,” said Dunbar coach Doug McClain. “[Seventh] place in a tournament like this is a huge accomplishment considering we were missing two starters and another starter with the flu.”