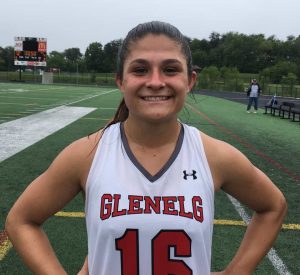 Top Dog: Anna Callahan finished with three goals and an assist in Glenelg’s victory over Kent Island in the Class 2A state girls’ lacrosse semifinal at Northeast. The Gladiators will try to win a third straight state title Tuesday against No. 12 Hereford at Stevenson University.

Glenelg High senior midfielder Anna Callahan entered Saturday’s Class 3A state semifinal against Kent Island barking like a dog.
The Duke University commit also left the Northeast’s field woofing after the third-ranked Gladiators (17-2 overall) waltzed past the Buccaneers, 18-4, to advance to next week’s state title game against No. 12 Hereford at Stevenson University’s Mustang Stadium.
“It’s a funny vibe,” Callahan explained about her antics after scoring three goals and adding an assist in the victory that upped her seasonal totals to a team-best 51 goals and 27 feeds. “It brings out a loose-loose, ready-to-play vibe. And it also brings out an animalistic instinct.”
It really wasn’t until the second half that Glenelg started seriously dogging their counterparts from the Eastern Shore.
Building a modest 6-2 lead at halftime, the Gladiators picked up the tempo in the final 25 minutes to outscore the Bucs, 12-2, over that span.
Senior attacker Georgia Esmond’s fourth goal of the game less than 10 minutes into the second half boosted the advantage to 13-3 and mandated a running clock from that point forward.
Simply put, after keeping the score reasonably close before the intermission, Kent Island (15-5) was unable to match the Gladiators’ pace and talent in the second half.
“We were a little unfortunate in the first half,” Kent Island coach Todd Holtzner said. “We hit some pipes and we missed some passes. But we were right where we wanted to be.”
Esmond and junior midfielder Jenny Giampalmo, who had a banner day taking draws, opened the second half with goals before senior midfielder Caroline Blandford answered for the Buccaneers to make it 8-3.
The Gladiators than ran off eight straight goals to secure the win.
Other than Esmond, Callahan, Giampalmo, junior attacker Sarah Cupola and senior attackers Maddy O’Brien and Rachel Scheinberg all scored during the spree.
“We didn’t take care of the ball very well in the first half,” Glenelg coach Nicole Trunzo said. “We just played faster in the second half.”
Trunzo said that Callahan’s enthusiasm helps to motivate her team in a big way.
“She’s a great leader, a great kid and a dominating force on the field,” Trunzo said.
CLASS 2A GIRLS STATE LACROSSE SEMIFINAL
AT NORTHEAST
NO. 3 GLENELG 18, KENT ISLAND 4
K  2  2 — 14
G  6  12 — 18
Goals: K-Caroline Blindfold 2, Ally Heath, Rachel Ruffennach; G-Georgia Edmond 4, Jenny Giampalmo 3, Rachel Scheinberg 3, Sarah Cipolla 2, Anna Callahan 3, Emily Nalls 2, Maddy O’Brien.
Assists: K—Grace Boyer; G-Rachel Scheinberg 3, Georgia Esmond 3, Anna Callahan.
Saves: K-Kyleigh Hessian 10; G-Maddie McSally 4.