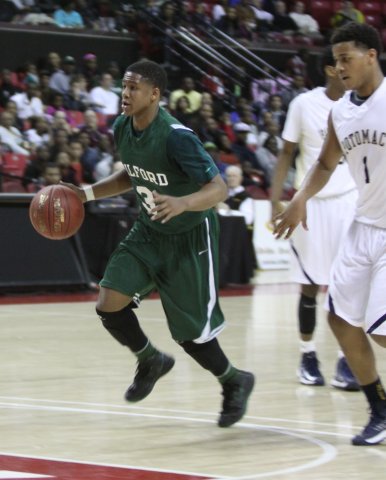 Sophomore buoyed his case as one of the best point guards on the East Coast with 37 points, 10 assists and 12 rebounds as Millers claimed third title in four seasons. The 5-foot-9 wunderkind had game-high 17 points and seven assists in title game assault of Potomac.

Allen Costley, Milford Mill Academy: Junior post totaled 28 points and 14 rebounds in two games for Baltimore County squad, including a solid 11 of 14 from the field. His follow dunk early Saturday may have been the knockout punch in one of the most lopsided finals in two decades.

Bruce Watkins, Milford Mill Academy: Senior capped his varsity career with 33 points and eight rebounds in two games for a second title in three seasons. The 5-foot-10 guard was tenacious on defense, totaling seven steals (tied for most overall in tournament).

Thomas Brown, Wicomico: Brown was a consistent force inside for Indians, totaling 31 points and 21 rebounds in two games at the University of Maryland. The 6-foot-4 senior had 15 points and 12 rebounds in the finals including a game-tying tip-in late in regulation.

Myrek Fowkles, Edmondson: The senior wing’s 26 points were important, but Fowkles’ state final four experience helped the Red Storm get through two tough matches at Comcast Center. He’s believed to be the first player to play in three state championship games in three different classifications (played in 2012 3A finals and 2011 4A finals with Patterson).

Darius Hubbard, Edmondson: Senior totaled 18 points and 17 rebounds in two games with a huge double-double (10 points and 11 rebounds) against Oakdale in double OT battle. The 6-foot-2 guard’s ability to get to basket and follow up shots was huge all season for the state champ Red Storm.

Davatious Thomas, Calvert: Senior had one of the best overall games at Comcast with 23 points and 11 rebounds in semifinal loss to Wicomico. The 6-foot-1 guard went 8 for 11 from the perimeter including five three-pointers.

Zach Thomas, Oakdale: Junior nearly carried Frederick school to state finals with 20 points and four rebounds against Edmondson. The 6-foot-6 forward should be among the state’s top senior recruits next season. 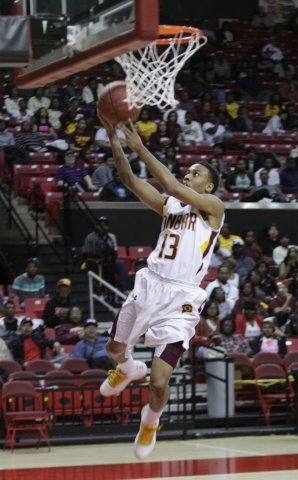 Consistent all season, the junior helped the east Baltimore school to another state championship. He had 13 points in state finals, including back-to-back scores in the fourth quarter giving Dunbar the lead for good against New Town. The 6-foot-3 guard totaled 30 points and four rebounds in two games.

Justin Brown, New Town: Brown totaled a 1A-best 41 points and 23 rebounds in two games for the Titans, who took Dunbar to the end in the state finals. If not for poor free throw shooting, New Town would be state champions and Brown the MOP.

Dallas Darling, Brunswick: The 6-foot guard produced one of the best rebounding performances on the weekend with 16 against New Town. The senior also led the Frederick County squad with 10 points and four assists.

Danny Shand, New Town: Junior was vital in team’s upset bid against Dunbar with 12 points and six rebounds before fouling out in the waning seconds. The 5-foot-11 guard totaled 29 points, 11 rebounds and six steals in two games at Comcast Center.