Back to the ground 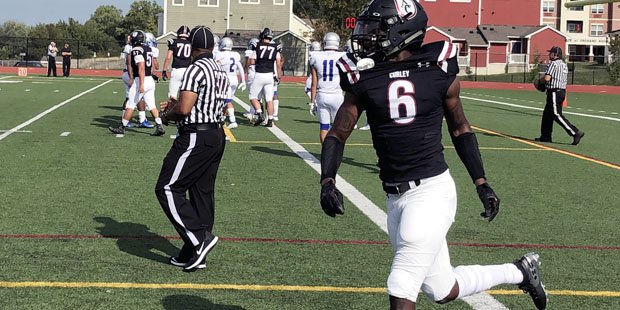 In his second season at the helm of the Archbishop Curley football team, head coach Brendon Ireton has restored the Friars’ commitment to a power running game, which served the program so well as it captured five MIAA B Conference championships between 2000 and 2014.
That running attack was on full display in Curley’s season opener, Friday afternoon in East Baltimore, as the Friars scored rushing touchdowns on their first three possessions of the game and cruised to a 35-0 victory over visiting Bishop O’Connell in the season opener for both teams.
After forcing the Knights to turn the ball over on downs on the first possession of the contest, Curley took over at the O’Connell 48 and needed just five plays, all runs, to reach the end zone for the first time in 2019. Senior Julian Howard setup the score with a 36-yard run on a fourth-and-three play one play before senior Devin Thompson scored on a 5-yard TD run.
Later in the opening quarter, Curley drove 83 yards on 12 plays. Howard ran three times for 18 yards on the drive and Thompson ran three times for 42 yards, including a 30-yard burst. Junior Ronald Clark delivered on the goal line, capping the drive with a 3-yard touchdown run.
Curley’s third touchdown drive was even more impressive, as the Friars drove 98 yards on 11 plays after getting pinned deep on a punt. Again Howard and Thompson did the bulk of the work, combining for 69 yards on six carries with Thompson going the final four yards for the score and a 20-0 lead.
Curley’s fourth touchdown came on an electrifying 68-yard touchdown pass from junior quarterback Kofi Kwaw to junior wideout John Munk in the third quarter. Curley also got a 95-yard interception return, which came up three yards short of a pick six, by senior Josh Knapp, setting up the Friars’ final score. Curley finished with 321 yards rushing and 423 yards of total offense.
“It was a great start for us going into year two,” said Ireton. “The kids are playing with a different mind set and their hard work in the offseason and this summer is paying off. They earned a good team win today.”
Pictured above: Curley’s Devin Thompson celebrates as he returns to the sideline after scoring the Friars’ first touchdown of 2019.