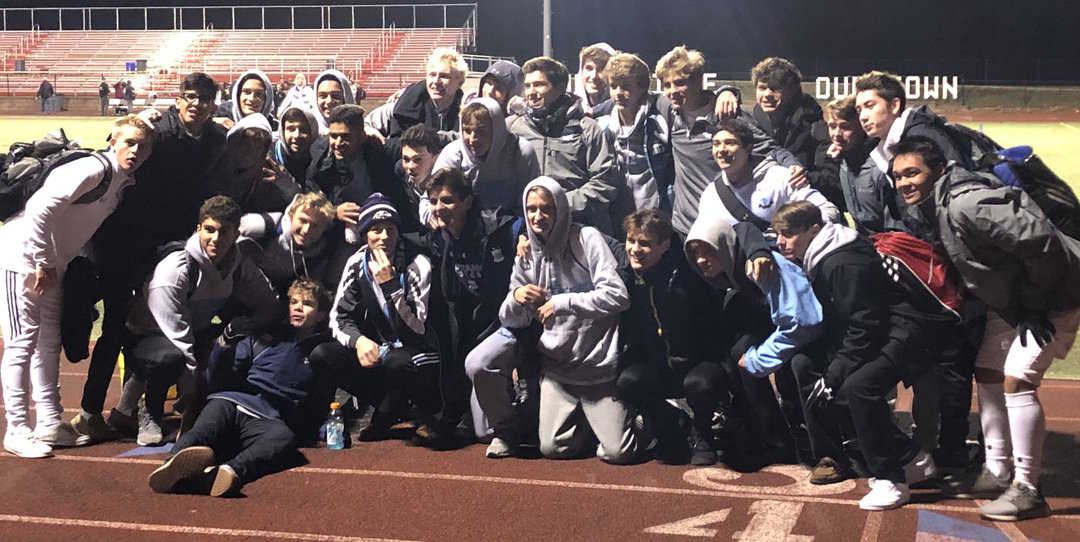 The champs are back: C. Milton Wright is headed to Loyola University after defeating Hereford in a Class 3A state boys soccer semifinal at Frederick County’s Linganore Saturday evening. The Mustangs will play Wilde Lake in the state final next week, looking to claim a third straight crown.

by Donald Daniel and Derek Toney

Scoring opportunities in Saturday evening’s Class 3A state boys soccer state semifinal between C. Milton Wright and Hereford were scarce. But as they have done all season, the Mustangs made the most of their chance.

In its first state Final Four since hoisting the 4A trophy in 1987, Arundel saw its season conclude with a 1-0 loss to Southern Maryland’s Leonardtown at Gaithersburg in Montgomery County Saturday. The Anne Arundel County squad had numerous chances, but were unable to overcome Garrett Bridgewater’s goal in the 9th minute.

Carroll County will have two opportunities at a first state championship since 2015 with Century in 2A and Francis Scott Key in 1A. The Knights ended Oakdale’s reign with a 4-3 penalty kick decision.

Colin Williams’ successful kick followed by Ethan Ricketts’ stop on the final penalty kick was the difference for the Eldersburg school, which ended Oakdale’s 22-game unbeaten streak, dating back to last season.

The Knights trailed 1-0 in the opening minute, but got even in the 46th minute on Jackson Glenn’s tally. Century last won a state championship in 2003 (2A).

In an all-Howard County semifinal, Wilde Lake overtook Mount Hebron over the final 15 minutes for a 2-1 victory in a 3A Final Four contest at Linganore. Junior forward Ousman Touray scored both goals, including the game-winner with 3:42 left in regulation.

“Me and Joebel [Gray] both came up top and they had trouble keeping up with us,” said Touray, who got to Ethan Shulgold’s header toward the goal box and headed the ball past Mount Hebron goalie Justin Carguilo into the net, for the equalizer.

The Wildecats kept up their work rate as Gray fed Touray who tapped the ball past an oncoming Carguilo. The rally capped a huge weekend for Wilde Lake, which girls soccer advanced to the 3A final with a penalty kick victory and football team upset favorite River Hill to advance in the 3A East Region playoffs.

Wilde Lake is a win away from its first boys soccer title since 1997.

“Once the girls got through, it was like it’s our time to go. It was deflating to give up the early goal, but we had a long time to adjust and fight back,” said Wildecats coach Trevor Shea, who played and coached under father Don, winner of 12 state titles at Oakland Mills. “I’m happy we’re going through and it’s a big experience.”

Next up for the upstart Wildecats is two-time reigning 3A champ C. Milton Wright, which received a goal from junior midfielder Garrett Tenchkhoff in the second half to turn away Hereford.

“They [Hereford] had scouted us pretty well, we like to knock the ball in the back and they had a plan for that,” said C. Milton Wright coach Brian Tully. “We felt as though we made some good halftime adjustments and we just stayed disciplined.”

The first half was a defensive battle as neither team got solid shots on goal. Seven minutes into the second half the Mustangs (15-3-1) nearly got on the board first, but Hereford goalie Logan Sinsebox halted the shot. Two minutes later, Hereford generated a great scoring chance of their own, but Mustang goalie Zach Herrick plunked Nate Gernard’s shot.

With 22 minutes left in the game Galant delivered a crisp cross pass to Tenckhoff who drilled the ball into net from 18 yards.

“It means a lot, considering it’s my first year on varsity and to score the goal to help get us to three-peat is pretty special,” said Tenckhoff.

“We work all week on finishing so when Garrett beat his man I just made the pass,” Galant said. “I just trust my teammates and I knew that he would be able to finish it off for us.” 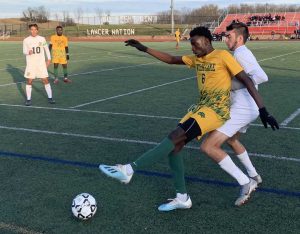 Wilde Lake’s Ousman Touray (front) tries to get control of the ball ahead of Mount Hebron’s Matt Millen during the second half of Saturday’s 3A state semifinal. Touray scored twice in the final 14 minutes, lifting the Wildecats past their Howard County rivals and into a first state final since 1997.

Hereford (14-4) turned up the intensity on the offensive end, but Mustangs was able to match their energy and kept the Bulls grounded. Herrick didn’t have to deal with any real scoring threat in the final minutes thanks to protection from the Mustang backline.

“We knew the opponent pretty well and that would take a really good performance from us, unfortunately we just had one breakdown and we paid for it,” said Hereford coach Adam Mizell.

It’s down to one game for C. Milton Wright, which will try to become the first area team since Marriotts Ridge (four straight 2A titles from 2009-2012) to three-peat and first in 3A since River Hill in the early 2000’s.

“Wilde Lake is a good team, they’re dangerous and we got to put in a solid week of training and prepare for what they do,” said Tully. “We just got to come out and make sure we don’t get outworked.”