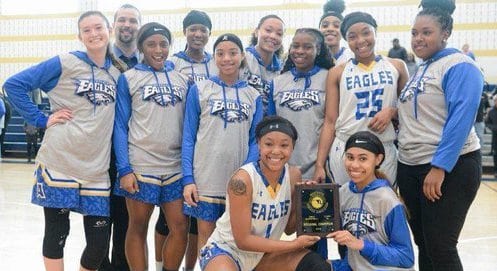 No. 20 Eagles top Towson for 3A North girls basketball championship; J. DeVeaux and Stancell combine for 25

Aberdeen High girls’ basketball team might have been looking for a stroll back to the state Final Four Saturday, taking on a Towson squad it pummeled in a holiday tournament in December.

Instead, the No. 20 Eagles found the going a bit more treacherous, pulling away late for a 42-31 home victory to secure the Class 3A North Region crown. Jaelyn DeVeaux led Aberdeen (22-1 overall) with 13 points and Anima Stancell added 12.

The Eagles are back on the big stage for the first time since claiming a second straight 3A title in 2013. The Harford County school will play No. 4 Poly in a 3A state semifinal, Thursday evening at Towson University’s SECU Arena.

“They developed over time, and our mindset might have been (like things were) back then,” said Aberdeen coach Jimmia McCluskey, who starred along current WNBA performer and former Maryland star Bri Jones on the Eagles’ back-to-back 3A title teams before starring in track at Temple. “I just told them to play their game and they stuck with it.”

Aberdeen led 23-20 at halftime, then Jaelyn and Tristan DeVeaux shook the visitors with six straight points to give the Eagles a 34-25 lead at the end of the third. Erin Sternberg tried to rally Towson in the fourth quarter, scoring six straight points, before

“We talked about not giving up,” Tristan DeVeaux said after McCluskey called several timeouts to settle down her troops. “We just fought to the end.”

Anna Lucas had the hot hand for Towson in the first half, scoring all of her points during a 10-1 run bridging the first and second quarters. Six-foot-2 freshman center Starlette Franklin was the defensive standout, producing five blocks in the first half as Towson kept Aberdeen off kilter.

The Generals were still ahead with just over two minutes left in the half until Stancell scored from the paint and Jaelyn DeVeaux converted a steal into another score for the Eagles. Towson never led again.

Generals coach Jennifer Hahn, who got a game-high 15 points from Steinberg, saw her team improved leaps and bounds from the first match with Aberdeen.

“We’re not the same team we were,” she said. “We started to shoot better and play better defense.”

Next up for Aberdeen is Poly, which routed southern Maryland’s Chopticon, 59-34, in the South final in Baltimore City. The Eagles’ lone loss this season came against eventual IAAM B Conference finalist Mount de Sales Academy at the Public vs. Private Challenge at McDonogh School in January.