Back to familiar spot for Panthers 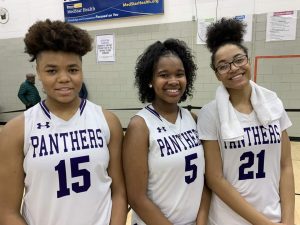 Kristin Sterling (left), Keyante Lewis and Charia Roberts each played key roles in Pikesville girls basketball’s comeback victory over Forest Park Saturday. The No. 8 Panthers rallied for a 65-62 victory over the 16th-ranked Foresters to win the Class 1A North Region championship.

Pikesville High girls basketball team had no answers. For nearly 2 1/2 quarters in Saturday’s Class 1A North Region title match Saturday, Forest Park had all the boxes checked in effort, execution and toughness.

Seeking to take care of some unfinished business, the No. 8 Panthers got off the proverbial mat and are headed back to SECU Arena. Pikesville rallied for a 55-52 victory over the 16th-ranked Foresters for the region championship.

Sophomore forward Kristin Sterling scored 19 points, and Charia Roberts scored all 13 of her points in the second half for Pikesville (21-4 overall). Nakiyah Johnson finished wth 18 points from Forest Park (18-4).

The Panthers will be back at SECU Arena after overcoming a 16-point third quarter deficit.

“I told the kids before the game that we got a lot of heart,” said Pikesville coach Michael Dukes. “We wanted to cut into the lead going in the fourth quarter. We didn’t get it down as much as wanted to, so we had to go with the pressure.”

The road back to SECU Arena was fading fast, trailing 46-30 with three minutes left in the third quarter. But a 30-11 run, capped by back-to-back 3-pointers from Sterling, put  the Panthers in front, 60-57, with 2:07 left in regulation.

Forest Park answered, getting a basket from Dorotha Banks off a steal by Josias Mickens, who followed with a 3-point bank shot from the top of the arc, to regain the lead, 62-60.

Roberts tied the game on a drive with 1:05 left. The teams exchanged possession on the alternating jump ball, and Forest Park had the ball with 32.7 seconds remaining.

Panthers junior guard Frances Glover intercepted a pass with about 26 seconds to play. She threw cross court to Amayah Frazier who quickly dropped the ball to Lewis, sitting just outside of the low block portion of the paint. She quickly turned and converted a short jumper.

“It was really nerve wracking. I didn’t know if I should shoot a layup or jump shot,” said Lewis. “It went in, but I like it was still five seconds left.”

Forest Park’s Diamonique Billie missed on an off-balance shot and Frazier was fouled with 5.6 seconds remaining. She converted one of two free throws for a 65-62 lead.

Billie’s 3-point attempt hit of the rim and Lewis captured the ball as time expired. Banks finished with 13 points for Forest Park, and Mickens added 12.

The Foresters, looking to return 1A Final Four after back-to-back runs in 2015 and 2016, grabbed control in the second quarter, hitting a trio of 3-pointers to take a 32-23 halftime lead. The Baltimore City school extended the lead to 44-28 with 4:05 left in the third after Billie’s 3-pointer and Wynter Gittings’ successful drive.

Pikesville started its comeback as Roberts’ 3-point play, brought the deficit under double-digits, 46-37, with 2:15 left. The Panthers trailed 49-41 entering the fourth quarter.

“Honestly I think it was some butterflies,” said Roberts. “Once we got it together, we calmed down and got our groove back.”

Pikesville, which defeated Western Tech in the county final a couple of weeks ago, believes it has the experience and confidence to leave Towson University really happy come next Saturday.

“I think we’ll be very comfortable going in there Friday and I expect us to play well,” said Dukes.