No. 1 St. Frances cruises past John Carroll for return trip to MIAA A hoops final; Staten and West each finish with 18 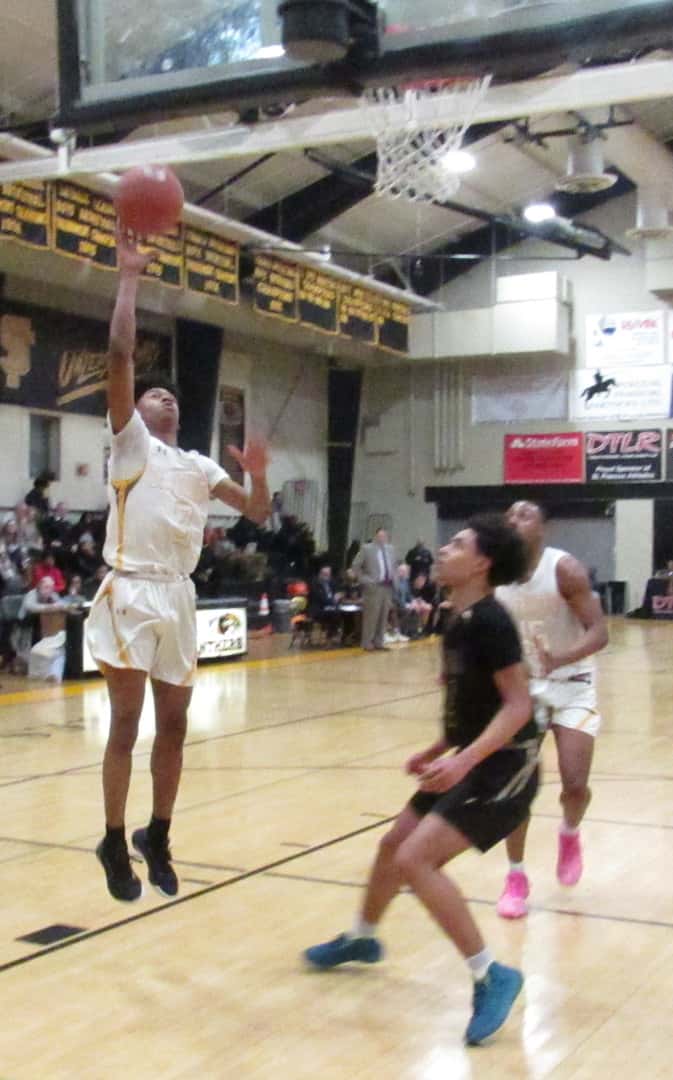 St. Frances’ Khyrie Staten goes up for two of his 18 points after a steal in Thursday MIAA A Conference semifinal contest with John Carroll. The top-ranked Panthers advance to the final with a 98-71 decision over the 11th-ranked Patriots in East Baltimore.

After its finest regular season, St. Frances Academy boys basketball knows it would ring hollow without a championship. The Panthers closed in on one of their title goals Thursday evening.

No. 1 St. Frances defeated 11th-ranked John Carroll School, 98-71, in a MIAA A Conference tournament semifinal inside Phelps Gym in East Baltimore. Senior forward Jamal West and Khyrie Staten each scored 18 points for the Panthers, and Byron Ireland finished with 15.

St. Frances (35-3 overall), ranked No. 6 nationally by ESPN, dominated the final three quarters, advancing to the league final for the second straight season. The defending champ Panthers will play No. 3 Mount St. Joseph for the title, Sunday afternoon at 5:30 at Harford Community College.

It’s where St. Frances expected to be since raising the MIAA A championship plaque nearly a year ago.

“This program is about championships,” said St. Frances coach Nick Myles, whose team won the MIAA A and BCL tourney crowns last year. “If we didn’t get there, no matter what kind of regular season we had, it would’ve been a disappointment. Now, we got to win it.”

The Panthers led by as many as 30 points Thursday as six players – West, Staten, Ireland, Adrian Baldwin (12 points), Johnathan Lamothe (11) and Julian Reese (10) – each reached double figures. West, who was named the Baltimore Catholic League’s Player of the Year earlier in the week, pulled down nine rebounds.

Individual accolades are secondary for the East Chase Street school, hoping to sweep the postseason and gain a berth in the GEICO High School Nationals tournament in early April. The Panthers took another a step toward a fourth MIAA A crown in eight seasons Thursday.

St. Frances led 25-22 after a back-and-forth opening quarter. With Reese obstructing John Carroll in the paint and finishing around the basket for six points, and Staten pouring in nine, St. Frances advanced the lead to 39-29.

The East Chase Street school blew the match open in the third, as Ireland’s 3-pointer pushed the lead to 65-44 with 3 minutes, 33 seconds left. It was up to 30 after a 3-point play by West.

Myles began pulling his starters midway in the fourth. Staten, whose had a breakout campaign, kicked in four assists and four steals Thursday.

“We came out with intensity. We let up too many points,” said Staten. “We said we were going to trap Tyson (Commander) as soon as he got the ball and we did that.”

Commander, John Carroll’s first-team BCL guard, had 15 points but only a 3-pointer in the first half. Jalen Bryant led the Patriots (22-11) with a game-best 23 points, and Jeannot Basima finished with 16.

The Bel Air school, in its first MIAA A postseason since winning it all in 2018 with former VSN Player of the Year and McDonald’s All-American Immanuel Quickley (now at Kentucky) and Montez Mathis (Rutgers), was toe-to-toe Thursday with the Panthers through the first 12 minutes.

It was hardly enough.

“We got to get consistent,” said Patriots second-year coach Seth Goldberg. “We were up-and-down tonight and they (St. Frances) took advantage of those moments…We got to play perfect in things we value, we got to be tough, we have to stay together. We did that, but at times.”

Khyrie Staten and Jamal West have St. Frances back in the MIAA A final after combining for 36 points Thursday. The Panthers will play No. 3 Mount St. Joseph for the title, Sunday at 5:30 p.m. at APGFCU Arena in Bel Air

Thursday’s MIAA A final four pitted the future with John Carroll (won five games last season) and Archbishop Spalding (won six), both with up-and-coming stars against the old guard in St. Frances and Mount St. Joseph. The Gaels avenged a loss a couple of weeks to Spalding with a 55-43 decision in other semifinal Thursday, setting up a third match this season of the Baltimore City rivals, Sunday evening at APGFCU Arena in Bel Air.

St. Frances and Mount St. Joseph split during the regular season, with the Panthers rallying from a 13-point fourth quarter deficit for a 73-69 on Valentine’s evening. St. Frances defeated the Gaels, 77-61, in the MIAA A title game last year.

“It’s a blessing to go back up there,” said West. “As long as we stay hungry, we’re straight. We want to eat and we’re going to.”