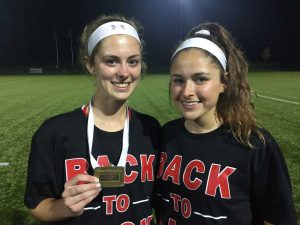 With nearly its entire roster back from last year, the road to the IAAM B Conference lacrosse final was supposed to be easy for Mercy High lacrosse this spring. It was far from it, but the Magic assembled things at the right time and are champions again.

The Northern Parkway school ran off six unanswered goals between late in the first half and early second half en route to its third league championship. Mercy defeated Friends School last year at Spalding’s Whittles Field for its first title since 2011.

Saturday was just only the third time this spring the Magic, which had a host of injuries, fielded its entire team.

“Dealing with a little bit of adversity then we got clicking and rolling. Our kids do all the heavy lifting, we point them in the right direction,” said Casserly. “They overcame all that stuff and just played hard all season and didn’t complain. They really wanted this.”

“We started out rough but we got to this point and we knew we were going to win,” said Krahl. “We knew this would be the end point and we kept striving for that.”

After a two-hour delay because of lightning and rain in the northern Baltimore County area, Mercy was impressive over the final 30 minutes. Senior midfielder Riley Rumbly also recorded a hat trick and junior Ada Clare Tempert scored twice.

The 15 goals Saturday matched Magic’s second-highest output of the spring.

“Going inside was a real setback, but we really made the best of it,” said Krahl. “We had a 10-minute warmup and just using our opportunities on the field. We worked as a team, not one-v-one show.”

“The kids were getting antsy and frustrated. We did everything we could to keep them loose,” said Mercy coach Brian Casserly. “They’re in the locker room listening to music, watching Netflix, trying to stay engaged.”

It was the Magic Show, starting with Tempert’s strike off the fake flip and shot play, followed with Rumbley completing her hat trick off a helper from freshman Michaela Burnett. Yeagle made it 15-6 with an unassisted goal for her 100th career tally.

“We did a really job moving the ball and making sure we find the open person,” said Yeagle.

“We have a lot of weapons on offense, a bunch of kids who can score,” said Casserly. “We wanted to take the best opportunities that we can and get good shots on goal.”

Freshman midfielder Becca Frank had three goals for Park (12-4), and Sydney Lowe added two goals and an assist. Tied at 1 before the delay, the Bruins led 2-1 and 3-2 before Mercy methodically pulled away.

“We had a seven-minute stretch where we unraveled a little bit, part of that is on me, I was trying to find the right defense to protect a little bit more. Kids weren’t quite sure where to be,” said Park coach Robin Lowe. “I thought we settled back in. It was a really physical game and that played to their advantage.

Getting here [championship] was unbelievable with the group of kids we had from the start of the season. I’m really proud of what they accomplished.”

Kristin Curry, Rachel Humbler, Kozlowski, Riley and Yeagle was freshman when Casserly became coach in 2014. The Magic has reached the B final the last four years.

“I don’t know what I’m going to do without them. I know they’re going to do great things in college,” said Casserly. “It’s just a testament to the kind of kids they are and what they did. The younger kids come into the program and they wanted to be those kids.”