The Crusaders had faced extensive ball pressure all season long from its league opponents and, for the most part, handled it well as they posted a 13-3 league mark and earned the top seed for the playoffs. That record included a pair of wins over second-seeded Gerstell Academy, the league’s defending champions and the Crusaders’ opponent in the final, at APGFCU Arena on the campus of Harford Community College.

What St. Paul’s did not expect was for the Falcons to be more successful with that pressure than anyone had been all season. It was the key for the Carroll County squad in battling its way to a 59-56 victory and its second consecutive MIAA B Conference crown. 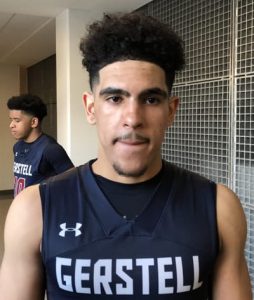 Anthony Carpenter’s 23 points and outstanding defensive play was a key in Gerstell’s MIAA B Conference championship win over St. Paul’s.

One of the chief architect’s of Gerstell’s victory was silky smooth senior Anthony Carpenter, who had 23 points, eight rebounds and five steals. Several of Carpenter’s steals turned into fast-break points and he helped the Falcons (21-12 overall) build momentum with several key three-pointers.

Another effective weapon for Gerstell was its ability to attack the St. Paul’s zone. The Falcons repeatedly sent cutters to flash into the paint, 8-10 feet from the basket, and they were consistently finding open looks and finishing them.

“We knew St. Paul’s would be in its zone. We just tried to get the ball in the middle and we got the high-low action,” said Carpenter in explaining Gerstell’s strategy for attacking the defense. “We were aggressive and I’m a senior and I didn’t want to leave without a championship. Offensively we kept switching up and it worked. It was a fun game. We fought hard.”

Sophomores Jeremiah Stanton and Antoine Thompson were two of the most active in this role, allowing Stanton to finish with 14 points and Thompson 11. Although he did not show up with big scoring numbers, sophomore Ahmad Harrison (6 points) made life miserable for the Crusaders with his interior defense.

Gerstell kept St. Paul’s chasing most of the afternoon and the Falcons led 26-21 at the half. The lead increased to 42-31 at the end of three quarters. The advantage stayed at or near double digits for much of the fourth quarter, but the Crusaders made things interesting over the final three minutes.

Senior Troy Barthelme led that charge with three three-pointers and finished with 20 points for the game, but Gerstell was able to hold off the Crusaders with just enough free throws in the final minutes.

Ziggy Reid, playing the final game of an outstanding high school career, added 17 points for St. Paul’s (19-9), but the Crusaders never sustained the consistency necessary for a prolonged run.

“We had a hard time handling their pressure at times and made some turnovers that cost us the game,” said St. Paul’s coach Phil Hahn. “They were not things, I think, we did poorly. I would give more credit to the energy and toughness of their man defense. Ultimately, the ball pressure was a little too much for us.”

“We put three things up on the wall before the game,” said Thompson. “Try to control the boards, that was the first thing, obviously with their size. The second thing was that patience, poise and discipline within the zone, particularly within the high post area, and we capitalized on that today as well. The other thing we wanted to make sure that we did today was to control our emotions, play within our game plan.

“We executed well. I thought from top to bottom, all around, I thought we had a good effort today.”

And, the Falcons may not be done winning championships just yet.

“We have six sophomores,” added Thompson. “Obviously we’re a very young team and the thing you can really see with them right now is they are developing some poise. That’s really important for them to get this kind of experience as sophomores and to play in these kind of games is going to be huge for their development.”