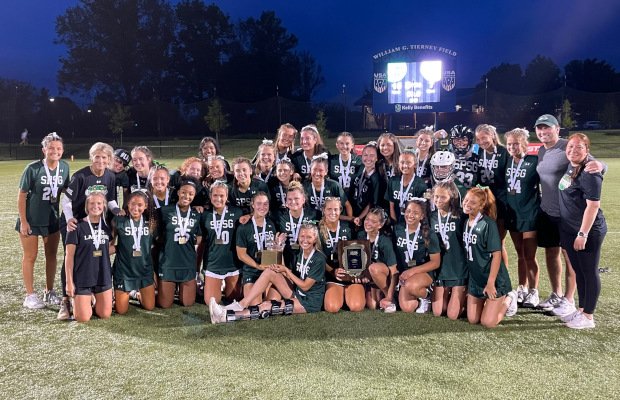 St. Paul’s School for Girls lacrosse players came up with a slogan for this season early on — “Let’s Go Crazy Back-to-Back.” 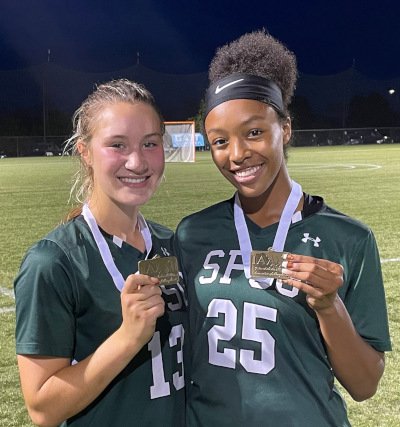 The No. 2 Gators went a little crazy late in the first half of Friday night’s IAAM A Conference championship to build a nine-goal halftime lead en route to a 15-7 victory over No. 1 Glenelg Country School for their second straight title at USA Lacrosse’s Tierney Field in Sparks.

The Gators (17-1 overall) avenged a 20-7 regular-season loss to the Dragons (17-2) two weeks ago. That loss cost the Gators the No. 1 local ranking, the No. 1 national ranking in the Nike/USA Lacrosse Top 25 and the top-seed in the A Conference tournament.

The Dragons took all three.

“We knew that we didn’t play well,” said Gators coach Mary Gagnon. “We were so excited and so ready to come and actually play St. Paul’s lacrosse, because we knew we didn’t (in the first game). The day after that loss felt terrible and we didn’t like it and it made us regroup and refocus and rededicate the last couple weeks of the season to being our best version.”

In the first meeting, the Gators were reeling from several recent injuries and one of their top offensive weapons, Natalie Shurtleff, played less than 20 minutes before a second yellow card forced her to the bench for the rest of the game.

“It just really, really weighs on you and you think about it constantly until the game and you just have to come in ready,” said Shurtleff.

Friday night, the junior midfielder led the Gators with five goals, including three of the first four.

Shurtleff scored on a feed from Frannie Hahn less than two minutes into the game and the Gators led the rest of the way.

“GCS, I didn’t get to play against them, most of it,” she said, “so I didn’t really get a chance to show it, so I came in today thinking, ‘First half has to be your best. You have to score.’ And then, I did.”

Shurtleff put the Gators on the board first, scoring off a feed from Frannie Hahn. After Hahn connected with Caroline Hoskins for a 2-0 lead, the Dragons cut the lead to one on Regan Byrne’s goal off a spin move.

The Gators then boosted the lead to 4-1 when Shertluff made a nifty dodge to the cage and then drilled a pass from Lauren Steer.

The Dragons, who had won 14 straight games, rallied with goals from Maggie Weisman and Regan Byrne to cut the lead to 4-3, but Gators would answer with an eight-goal run through the final 14:11 of the half and the Dragons would not score again until 18:01 remained in the game.

The Gators broke away with four goals in less than two minutes. They won all four draws and Lauren Steer scored first in the run. The Dragons picked up a yellow card and the Gators added three quick extra-man goals. Shurtleff, Karina Herrera and Kendall Steer scored while Hahn dished out two assists and Lauren Steer, one.

The Dragons couldn’t seem to get any traction for their offense. They often rushed their shots and they turned the ball over nine times in the game. They dominated the draws in the first meeting, but St. Paul’s won 16-of-25 draws Friday night, helping them to a big advantage in time of possession.

In addition to Shurtleff’s five goals, Lauren Steer finished with two goals and four assists and Hahn had a goal and five assists.

Weisman, a senior midfielder, said that after the win two weeks ago, the Dragons underestimated St. Paul’s.

“They are a really great team,” Weisman said, “and they were hungry. They wanted it and I think we took that for granted and just let it slip away from us, because we made some silly mistakes, some mistakes that we had never made before and I think we just let them get the best of us unfortunately.”

The Gators, ranked No. 3 in the Nike/USA Lacrosse poll, played a terrific all-around game with no weak links from end-to-end and Gagnon credited her assistant coaches, Melissa Diepold and Deemer Class, for helping make it all work despite the injuries.

Defensively, senior Madison Beale led a mostly rebuilt unit, after suffering a handful of season-ending injuries in the final month of the season. Midfielder Anna Regan moved to defense to help veterans Kendall Lally and Kira Balis, who had just returned from a shoulder injury. Goalie Susan Radebaugh finished with five saves.

Beale, who will play for Duke University next spring, did a tremendous job defending the Dragon’s Jaclyn Marszal straight up. Marszal had 14 points in the first meeting, including eight goals.

“We never think about the last game,” Beale said. “She’s a really good feeder and when no one’s on her, she can just go straight to goal. She’s really good at faking, so I just had to step up and we all stepped up as a defense today.”

The title is the fourth for the Gators since 2004. The Brooklandville school is the first team outside of McDonogh School to win consecutive A titles since John Carroll School (2007 and 2008).

The Dragons, who won back-to-back B Conference championships before moving up in 2017, are still searching for their first A title. This was their first appearance in the title game after making the semifinals every year since they moved up (except the COVID-cancelled 2020 season).

“I think the girls played with some nerves,” said Dragons coach Paige Walton. “They came out, got a few quick goals, kind of what we like to do, so St. Paul’s was the better team today. I told the girls after the game tonight, they’ve had a great season, a strong season. I was proud of how they were playing until the end.”