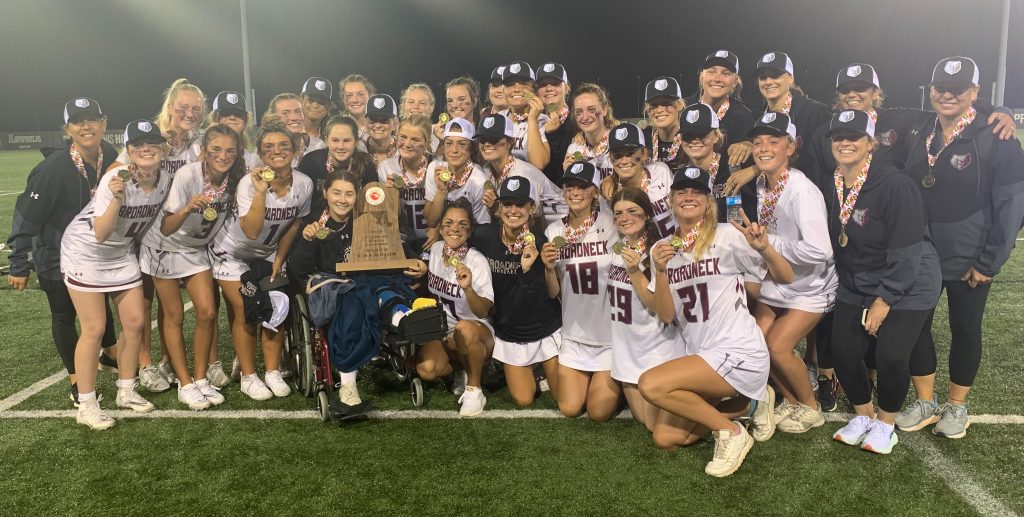 Lexi Dupcak made sure Broadneck High’s girls lacrosse team got off to a fast start in Thursday night’s Class 4A state championship.

The junior midfielder grabbed the first nine draws of the game, scored two of the first three goals and sparked an offensive firestorm as the No. 9 Bruins rolled past Bethesda-Chevy Chase, 17-4, for their second straight state title at Loyola University’s Ridley Athletic Complex.

Eleven players scored for the Bruins (17-3 overall) who had 14 assisted goals, but it all started with Dupcak who sent them on their way to a 19-3 advantage in draw controls. 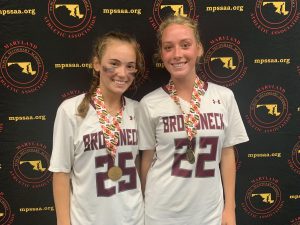 Sam Lavorini (left) and Lexi Dupcak were driving forces for Broadneck girls lacrosse Thursday evening. Dupcak won the first nine draws, and Lavorini was one of 11 goal scorers for the No. 9 Bruins, who repeated as Class 4A state champions with a 17-4 victory over Montgomery County’s Bethesda-Chevy Chase at Loyola University’s Ridley Athletic Complex.

“It’s about the people on the circle too,” said Dupcak, giving credit to teammates Mary Moore and Lilly Kelley.

“I try to get it to myself, but it’s the way that they position themselves that if I know where it’s going, then I can just run right there. It’s not really a battle. It’s kind of a one-on-one, not a two-v-two, so it’s easier. I think that helped because they were really in tune with where the ball was going tonight.”

Winning 11 of 13 draws in the first half helped the top-seeded Bruins kick in a running clock for a 10-goal lead with 3:58 left in the half. By the break, they built their lead to 12-1 over the first-time state finalist Barons (13-5).

“We have such confidence in her on the draw,” Broadneck coach Katy Kelley said. “She’s mentioning Lilly and Mary. Yes, they’re helping in that capacity, but they know what Lexi’s doing, so it’s just a confidence thing for the whole team. You have possession, it’s the key to the game, so we’re very thankful for her having that skill.”

The Bruins easily found the seams in the Barons’ defense all night, moving the ball quickly and threading it to players open in front of the goal.

Lavorini, a senior headed for Penn State, dished out five assists while Moore and Kelley contributed three each.

“I feel like our attackers and middie lines included, everyone just works really well together, Lavorini said. “Everyone’s cutting and open. I just like looking in the middle and they always know how to get shots off and catch our passes. Sometimes I get it in there a little too tight, but I think assists are just as important as goals.”

This was the fifth state title for the Bruins and their second time winning back-to-back. They won Class 4A-3A titles in 2003 and 2004 as well as 2013 before the tournament expanded to four classifications in 2017.

The Bruins outscored their five playoff opponents, 84-25, and only one team came within 10 goals of them. They played a much tougher schedule than the Montgomery County opponents, Sherwood and Bethesda-Chevy Chase, they beat in the state semifinals and final.

Although they lost to Class 2A champion Century, 9-7, and twice to Class 3A finalist Severna Park, including 11-9 in the Anne Arundel County championship, they defeated 3A champion Marriotts Ridge, 15-6, and Delaware state champion Cape Henlopen, 16-13.

Kelley said playing that tough schedule gave them an edge in the state tournament.

“It’s huge,” Kelley said. “We learned a little bit about ourselves in those games. We were slow at the start and we’d get ourselves in a little bit of a hole and sometimes we can get out of it and sometimes we can’t and I think that grew them as players and us as coaches as it always does… but that’s what it’s all about. You want to compete with the best. You want to have games that are tough. You’re not going to grow as lacrosse players if you don’t have that — or as coaches, honestly.”

The Bruins had a much easier time winning this title than they had in last year’s 12-11 win over Arundel. In that game, they needed to win the final draw to seal the victory and, of course, Dupcak snared it.

Even though that title capped a 13-0 season, everyone shared a little more in this one.

“I think this one was more special, because everyone got to go in and we had two (players who missed a lot of time recovering from torn ACLs) that got to score tonight which was really cool,” she said of seniors Facciponti and Yeomans.

The Bruins should return seven starters next season to make a run at a three-peat, but they will graduate 12 seniors — attackers Lavorini, Sokolowski, Rachel Baldwin, and Facciponti, midfielder Ella Killian, defenders Carly Johnston, Peyton Baldwin, Kate Lindsay, Mason Smargissi and Yeomans as well as both goalies, Chloe Rand and Caitlin Alperstein, who combined for six saves in the title game.

“We do have a huge senior class that we’re losing, some with a ton of playing time, some not so much,” Kelley said, “but from one end to the other of that group, they have really set a great standard of leadership, selflessness, just having fun but taking pride in being good, so we’re going to have to figure that out. The junior class is going to have to figure that out. I have a very talented junior class, our middie line is junior class, so I’m not worried about it, but I do think our senior class is something really special.”